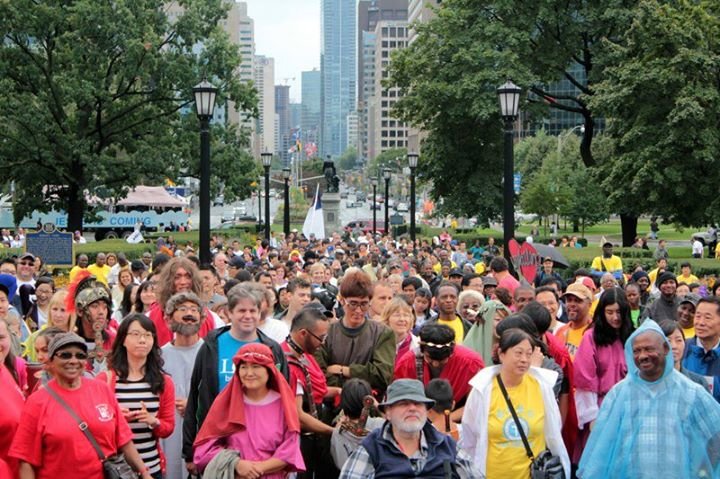 With two weeks to go, the City of Toronto has refused to let thousands of costumed Christians assemble at Queen’s Park on September 6 before parading through the city’s downtown.

But help may be on the way: Rob Ford, Toronto’s incumbent mayor, while deep in his re-election bid, has vowed to straighten out officialdom and get the event restored, though it may take “some rerouting.” Ford told the Toronto Sun: “I want the Jesus in the City Parade back on.”

City staff blamed road repairs on Queen’s Park Circle in front of the provincial legislature but organizers of the 15th annual Jesus in the City Festival of Praise suggest that the city would have found an alternative had the parade been for homosexuals or a minority ethnic group.

“It is a sad day in this city when a parade for peace and love, Jesus in the City, is cancelled by city officials,” said Charles McVety, the media-savvy head of Toronto’s Canada Christian College who is promoting the event and who is often identified as one of the leaders of Canada’s “Christian Right.” He added, “They would never do this to (the Caribbean Carnival) or the Pride Parade.”

Hoy’s boss, Director of Transportation Services Jacqueline White, weighed in as well, noting the presence of construction equipment and the closure of some parts of the Crescent due to repair work, the “sheer number of people that were expected to participate,” and the need to accommodate other events on the same day such as the Toronto Film Festival and “orientation at the University of Toronto.”

If that weren’t enough, White hinted the application had come in late. “Toronto Police Services and others have been working with the organizers of this parade to try and accommodate them since they submitted their application at the beginning of June of this year.”

But McVety claims the application went in February 22 and he’s got the paperwork to prove it. “It’s not like it’s a surprise to the City. It’s our 15th year,” he told the Toronto Sun.

“Christians are being slaughtered around the world and now persecuted at home,” he added.

Asked if the city's decision betrayed anti-Christian sentiment, White told LifeSiteNews, “I can’t respond to that. This was all about managing large numbers of people, closing roads for several hours while competing events are going on in the same area.” But it is not true that a permit was “revoked,” she says, “because we never issued a permit.” She stands by her insistence that the application didn’t get to the City till the beginning of June. “They also needed a permit from the police and I can’t speak to when they got that in.” But, “for an event of this scale we like to sit down with the organizers and start planning a year ahead.”

But is the parade really being cancelled? The organizers did not respond to LifeSiteNews interview request by press time, but on the event’s website there was a lurid, red notice that began with this more hopeful message: “The City of Toronto has informed us that due to the delayed construction…the Jesus in the City Parade will have to assemble along an alternate route or consider a later date in September (TBA). Alternate assembly locations are being explored, as well as a possible date change.”

McVety himself told the Toronto Sun he was hopeful a solution could be found by next Tuesday, while Mayor Ford said City Manager Joe Pennachetti had told him he was working hard to find that solution.

White confirmed to LifeSiteNews that, “We met with them today and may come up with an alternative at a second meeting tomorrow but I’m not sure we can come up with something.”

The Evangelical Fellowship of Canada has raised another issue: Does a city administration have a special duty to support freedom of conscience and religion, which are both accorded special status in the Charter of Rights and Freedoms as fundamentals of democracy?

EFC Media Relations Director Rick Hiemstra thinks so. “The Charter sets a high bar for restraint of religious freedom. I would hope the City of Toronto will be able to reach that bar when it justifies this,” he told LifeSiteNews. “The EFC also expects that Toronto would do what it can to find an alternative route or date.”