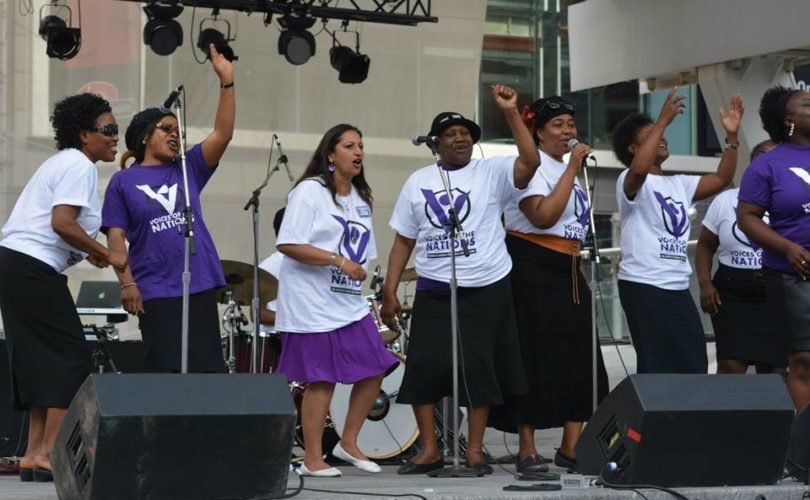 TORONTO, October 29, 2015 (LifeSiteNews) — The City of Toronto is refusing to grant a Christian group a permit to use a prominent downtown square for its annual musical festival next year, because the city has decided that singing the name of Jesus in the public venue contravenes city policy against “proselytizing.”

Voices of the Nations (VON) has been using city property since 2006 for an annual “multi denominational” event in which it celebrates Christianity through live music and dance. It has been using the Yonge-Dundas Square without issue for the past five years. This year’s August 1 event attracted 19 different performance acts, including children’s choirs and popular Christian bands, where well-known ‘praise-and-worship’ songs such as “Days Of Elijah” are performed.

When VON’s Events Coordinator Leye Oyelani contacted the Square’s Manager of Events Natalie Belman last week by phone to apply for next year’s permit, he was told that a permit would not be issued and to look for a venue elsewhere.

“I’ve already advised Peter [Paresh, Director of VON] that we're not going to be permitting you guys this year for next year because of the proselytizing on the square, and that’s a big issue for us,” said Belman in a transcript of the October 23 conversation obtained by LifeSiteNews.

A volunteer Board of Management appointed by Toronto City Council operates the Square. Taxpayers contribute about $400,000 of the Square’s annual $2.3 million budget to help pay staff salaries and other costs.

Video from Voice of the Nations 2015:

Posted by Voices of The Nations on Wednesday, August 26, 2015

When Oyelani asked the city official exactly who proselytized at the event, Belman responded that the “performers did.”

“If you’re praising Jesus, ‘praise the Lord,’ and ‘there’s no God like Jehovah,’ that type of thing, that’s proselytizing,” she said.

Oyelani then said that he didn’t think singing about God “would be a problem” given that it was a Christian event.

“That is a big problem,” Belman replied. “That [kind of thing], from the stage, is not acceptable.”

The Merriam-Webster dictionary defines proselytism as “inducing someone to convert to one's faith.” Event organizers confirmed to LifeSiteNews that at no point during the performances did the artists induce passersby to convert to Christianity.

Belman went on to relate to Oyelani in the phone conversation that proselytizing goes against the city’s Performance & Display Policy.

While the policy states that “Performances / Displays must not advocate a specific political or religious point of view for the purpose of proselytizing” it does not prohibit singing the praises of God or mentioning the name of God.

Belman, who said she was present at the August festival, told Oyelani that the performers’ songs go against the policy.

“That seems to be a large part of your programming, it seems to be an integral part of what your mandate is, and given that, I think that you guys should be looking for a different venue, because that is not in-line with our policies,” she said.

LifeSiteNews attempted to reach out to Natalie Belman on three occasions by phone, but was unable to obtain a comment by press time.

“How’s a Christian at a Christian Event not to say the name of Jesus in their Songs?” he asked in an interview with LifeSiteNews.

The Ontario Human Rights Code prohibits discrimination based on “creed,” calling it a “discriminatory practice” to deny someone “services, goods and facilities” based on this prohibited ground. Individuals discriminated against can launch a complaint to The Human Rights Tribunal of Ontario.

Lynn said he preaches daily in Dundas Square and sees every kind of group using the venue to share their own perspectives and worldviews.

“Daily I see every kind of event, from Muslim, Buddhist, LGBT, Rap, Hindu, and they all share their beliefs and express their philosophies. That is the beauty of diversity, which, while I don't agree with everything everyone says, I nevertheless embrace it.”

Lynn, who has previously faced persecution from the city’s police for spreading the Good News on the city’s streets, called it “bullying” to deny Christians the “right to sing about their God and about their creed” in the public square.

“This City of Toronto verdict is telling the Christian Community that we are not allowed to be ourselves on Toronto property. This is awful,” he said.

Peter Paresh, Director of Voices of the Nations, told LifeSiteNews that he was shocked when the permit was denied. He said his ministry has never had a problem obtaining a permit for the festival since it moved to the square in 2010.

“I’m writing today to express my full support for the Voices of the Nations Concert, to be help at Young-Dundas Square on Saturday August 3, 2013,”  wrote then-councillor Doug Ford to the Square’s former Manager of Events Sarah Peel.

“This fantastic event contributes to the vibrancy and diversity of our City and I am proud to lend my support to it,” wrote Ford.

Paresh views the permit refusal as a direct assault on God and has vowed to fight the verdict.

“Even if part of me is weary about what's going to happen, I know that God is going to take care of everything. I just have to step out and make sure I vindicate his name,” he said.

Ben Robinson, director of the Toronto Christian Business Directory and a sponsor of the VON event, called it “sad” to see public officials “discriminating against a Christian group for singing songs in public about Jesus.”

“It’s almost as if we are nearing the last days where the Bible tells us that Christians will be persecuted for their faith. This is only the tip of the iceberg and I believe that things will only get worse, but we know that Jesus has already won the war,” he told LifeSiteNews.