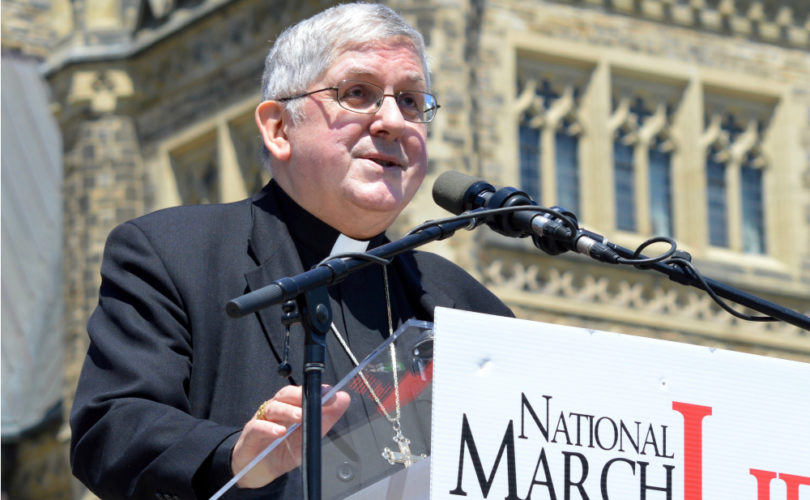 Cardinal Collins strongly denies telling the Tories to 'back off' the sex ed fight, yet the claim did seem believable in light of the Ontario Catholic leadership's refusal to fight the program.Patrick Craine / LifeSiteNews

TORONTO, November 27, 2015 (LifeSiteNews) — Cardinal Thomas Collins of Toronto says the claim by a major figure in the Ontario Progressive Conservative Party that he told them to “back off” the sex-ed fight is “grossly inaccurate.”

PC House Leader and Catholic MPP Jim Wilson stated last week that the cardinal personally invited him to breakfast prior to the release of the Liberal’s controversial sex-ed curriculum last February.

Wilson made the comments last Wednesday while speaking with university students who had made a field trip to Queen’s Park to learn about the role of faith in politics. When one student asked the politician how his faith had influenced him, Wilson, who at that time was interim party leader after the resignation of Tim Hudak, brought up the sex ed issue and credited Cardinal Collins for relieving his conscience in deciding what course to take.

“I’m very close to Cardinal Collins, and he actually called me up,” Wilson related to the students, according to an audio recording of the event published by the Catholic Intelligence blog, and obtained separately by LifeSiteNews.

“I guess the Liberals must have told him, ‘We’re going ahead [with the sex-ed plan],’ and he figured it out. He called me up in my House Leader role, and we met down at [a downtown Toronto restaurant] — 7:30 — one morning,” he related.

Wilson told the students the meeting was “like divine intervention” since it determined what course he and the party would take on the sex-ed program.

“The guy calls me up and says, ‘Here’s [what you have to do].’ So, from a faith perspective, I would have been off track [from] the leader of my faith, in this part of the world, [had I opposed the sex-ed]. So as a result, I never did get any [advice from] priests, or anyone. Others might have. It’s a very good question because the answer is, ‘I really didn’t have to make a decision,’” he said.

Listen to Wilson's remarks to the university students:

When LifeSiteNews asked Cardinal Collins about the accuracy of Wilson’s account, the archdiocese’s spokesman, Neil MacCarthy, did not deny that the meeting took place, but strongly criticized Wilson’s portrayal of it.

“The archdiocese does not, as a general rule, comment on the nature of these private meetings,” MacCarthy said. “However, Cardinal Collins vehemently disagrees with Mr. Wilson’s characterization of their relationship, the meeting arrangements and the remarks attributed to His Eminence. They are grossly inaccurate.”

LifeSiteNews also asked the cardinal about his position on the sex-ed plan, but his response did not address the question.

LifeSiteNews attempted to reach Mr. Wilson by phone and email numerous times over several days for a reaction to the cardinal’s statement, but received no response.

The exact details of Collins’ meeting with Wilson are unknown, but sex-ed opponents took notice of Wilson’s remarks because they supported existing evidence that Ontario’s Catholic leadership not only refused to fight the program, but even supported it.

Of course, beyond the cardinal’s own statement, there are good reasons to take Wilson’s claim with a grain of salt. In particular, it is hard to fathom that Wilson, who is rated pro-abortion, had any intention of truly fighting the program, no matter what the cardinal told him. In these very same remarks to the university students, he claimed to have only received three e-mails from constituents against the sex-ed program, making it seem as though it was not a major issue of concern. Yet Campaign Life Coalition says they have been included on, or received, at least 24 e-mails that constituents sent to Wilson. And, they note, constituents held a protest rally outside his office in September.

To begin with, Ontario’s bishops, for whom Collins serves as a leader in his capacity as president of the Assembly of Catholic Bishops of Ontario, have not opposed the curriculum at all. Save one, that is. Prior to its release, Ottawa Archbishop Terrence Prendergast made a strong presentation warning that it “threatens the fundamental right of parents to educate their children in the moral dimension of sexual behaviour.”

Furthermore, within days of the curriculum’s release in February, Education Minister Liz Sandals revealed that the Institute for Catholic Education (ICE), an umbrella group of Catholic education stakeholders based in the Toronto archdiocese, had not only been involved in the development of the program “right from the beginning,” but had given it a form of approval prior to its release.

On the same day the curriculum was unveiled, Cardinal Collins released a letter affirming that the Catholic schools would teach the curriculum after some adaptations by ICE. “While Catholic schools have a responsibility to follow the curriculum set out by the Ministry of Education, they have always sought to do so in a way that conveys, respects and models Catholic Christian principles to our students,” he wrote. “A group of Catholic educators will produce resources that support Catholic teachers so that the new curriculum is implemented in a way that is consistent with our Catholic teachings and appropriate within the context of a Catholic classroom.”

The archdiocese then released a statement the following day telling concerned parents that ICE would adapt the ministry’s sex-ed plan to work with the bishops’ own scandal-plagued family life program “Fully Alive,” a program with developmental ties to the Sexuality Information and Education Council for the United States (SIECUS), an organization founded by abortion giant Planned Parenthood. The archdiocese stated that the ministry had provided it with funding to develop “faith-specific resources and materials.”

Collins’ statement on the sex-ed program the day it was released has been his only comment to date, and it has had a major effect in muting concerns within the Catholic community. LifeSiteNews learned of a Catholic Liberal MPP who told one pro-family group trying to galvanize support in opposing the newly unveiled sex-ed that he would not come out publicly against it because Cardinal Collins “didn’t have a problem with it.” He went on to tell the pro-family group that when Catholic parents voiced concerns about the sex-ed plan, he simply showed them the cardinal’s letter to disarm their objections.

Critics have also highlighted the fact that the Ontario bishops’ approach abandons students in the public system who will not have the same benefit of implementing the program in accord with their faith. In fact, the Church in her own documents emphasizes that Catholics have a duty to speak out against government programs even if the Church is given an exception.

In 1992, the Congregation for the Doctrine of the Faith said it is “inappropriate” for Church authorities to “endorse or remain neutral toward adverse legislation, even if it grants exceptions to Church organizations and institutions.”

LifeSiteNews received no response from Cardinal Collins when asked if Catholic leadership has any responsibility to defend natural law principles in the public system.

Additionally, this is not the first time Cardinal Collins has played a background role involving government prerogatives actively opposed by Catholic parents and various pro-family organizations. LifeSiteNews learned about closed-door negotiations between the cardinal and the government over the 2012 Accepting Schools Act (Bill 13) — a bill that forced into Catholic schools gay-pride clubs and a corresponding acceptance of homosexual and transgender ideology contrary to Catholic sexual morality — where the views of parents and groups opposed to the program were ultimately rejected. When the bill passed, Collins reacted to it by declaring that the act is “now the law,” much to the dismay of parents and groups who had been working together for months to stop the legislation.

Too much too early

The sex-ed curriculum, implemented in schools this fall, continues to be opposed by hundreds of thousands of parents from a diversity of religious and cultural backgrounds. Parents who are Hindu, Sikh, Muslim, Christian, and Catholic say the sexual content the curriculum pushes on their children is too much too early. They fear for the integrity of their children. In no place does the sex-ed program speak about sexual activity in relation to marriage, love, and personal responsibility. The conception of a child is presented negatively, to be avoided through condoms and contraception.

To achieve these ends, the Ontario sex-ed program teaches children from the youngest ages to become overtly familiar with their own sexual organs and those of the opposite sex. They are taught the names of sexual parts of the body and shown images. As they advance, they are given information about how the sexual organs fit together, about how to make sexual plans, about how to properly use contraception to avoid becoming pregnant, and how to give sexual consent to someone asking for sex.

Groups opposing the program, including Canadian Families Alliance, Campaign Life Coalition, Parents as First Educators, REAL Women of Canada, the Catholic Civil Rights League, and many others, say the curriculum attacks the innocence of children by sexualizing them from the earliest age. Critics also say it has an explicit homosexual agenda, and will normalize the acceptance of homosexuality and homosexual practices to the up-and-coming generations. American psychiatrist Dr. Miriam Grossman has criticized the curriculum for being based on sexual ideology, not science.

“We say ‘No,” is the slogan parents chant at the dozens of demonstrations and rallies that have taken place across the province outside of MPPs’ offices and in cities such as Toronto.

See important related article
Don’t believe the Wynne sex-ed program is as bad as many warn? These videos are mandatory viewing.