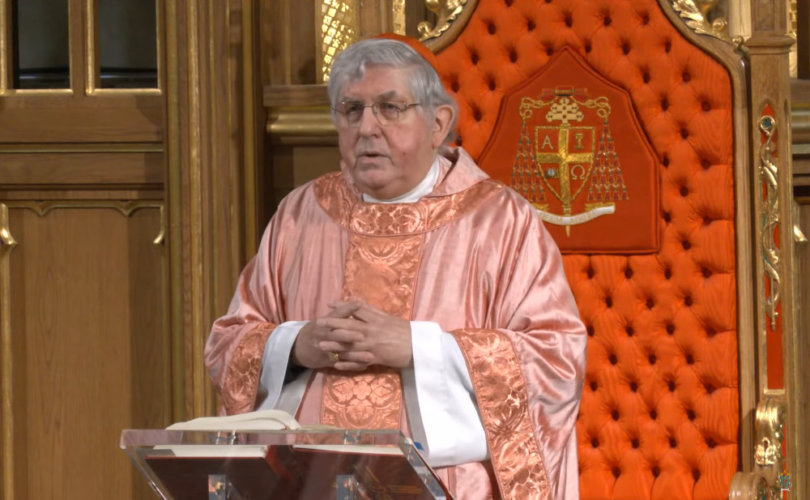 TORONTO, March 15, 2021 (LifeSiteNews) – Cardinal Thomas Collins, the Archbishop of Toronto, told Catholics that it is “common sense” to get vaccinated against COVID-19, characterizing it as an “act of charity” despite significant ethical and safety concerns having being raised about the use of the experimental vaccines.

Cardinal Collins delivered his extraordinary vaccination promotion with phraseology that appeared to mirror globalist leaders and politicians, who have advocated the experimental vaccines as the sole escape from the restrictions imposed upon their respective countries.

Speaking at the end of Mass to an empty St. Michael’s Cathedral in Toronto on March 14, Collins took the opportunity to promote the experimental vaccines for COVID-19, declaring them to be “one of the signs of hope we’ve been long awaiting for.”

Continuing, Collins dubbed taking the experimental vaccines an “act of charity,” describing it as “a wise and sensible thing.”

“It is one of the most – it’s not a magic bullet, nothing is – but it’s one the most sensible ways in which we can get beyond this pandemic and move on to serve the Lord day by day in ways that we put this behind us.”

“So I strongly urge everyone to get vaccinated,” he concluded.

In calling the experimental injections “wise and sensible,” the cardinal seems to be unaware of the growing concern about the shots. Just in the last few days alone, several countries have halted the use of the Oxford/AstraZeneca injection due to blood clots and deaths following the injection.

Indeed, every day, new reports are made about otherwise healthy individuals dying shortly after having the injection, or experiencing severe reactions, including becoming deaf or blind, yet despite this the architects and financiers of the injections continue to reap record billions in profits.

As part of LifeSiteNews’s recent COVID-19 conference, a panel of doctors warned about the severe and as yet unknown dangers of the injections, which people are taking effectively making a “clinical trial in the general population.” Dr. Sheri Tenpenny predicted an “autoimmune cascade” due to the manner in which the COVID injections attack one’s immune system.

Notwithstanding these concerns, the cardinal also avoided the moral issues surrounding the experimental injections, which have led a number of his fellow bishops and cardinals to protest their use. Due to the abortion-tainted nature of all the injections currently in use, Bishop Athanasius Schneider, along with co-signers Cardinal Janis Pujats, Bishop Joseph Strickland, and Archbishops Tomash Peta and Jan Pawel Lenga, expressed the strong conviction that any use of a vaccine tainted with the “unspeakable crime” of abortion “cannot be acceptable for Catholics” under any circumstances.

Collins also ignored the scientific advice given by Dr. Michael Yeadon, the former vice president of Pfizer who flatly rejected the need for COVID vaccines, saying, “There is absolutely no need for vaccines to extinguish the pandemic. I’ve never heard such nonsense talked about vaccines. You do not vaccinate people who aren’t at risk from a disease. You also don’t set about planning to vaccinate millions of fit and healthy people with a vaccine that hasn’t been extensively tested on human subjects.”

A statement from a group of international female doctors, religious and pro-life leaders reveals that Collins’s actions may in fact have far exceeded his role and authority. “The vaccine’s experimental nature makes urging, coercing, or forcing people to take it a direct violation of the Universal Declaration on Bioethics and Human Rights,” the group wrote, adding that “the safety data that has been collected is insufficient to determine possible long-term effects.”

However, Cardinal Collins’s subscription to the mainstream narrative concerning the safety of the experimental vaccine should perhaps not be surprising. In November 2020, he issued a strong warning to any priest who dare to distribute Holy Communion on the tongue to worshippers due to concerns about spreading the infection. “I’ve dealt with cases, and I said to a priest, ‘I will shut you down. I will shut you down in a heartbeat!’” he said.

“If we have a place, one of our parishes, if we have one parish where they’re loosey-goosey with the protocol … I will shut you down! Because I cannot have a parish, one parish or any parish, mess it up for us all, endanger the whole diocese, every church in the province for that matter.”

Following his warning to the clergy, Collins then cancelled public Masses in the Toronto & Peel Region after government lockdown regulations said there could be no more than 10 people inside a church at a time.

However, Collins recently decided to ask for permission from the government to expand the number of people allowed to attend Mass and attacked Ontario Premier Doug Ford for his decision to limit capacity in places of worship more than in liquor stores or malls. Politicians were in an “extremely difficult position,” Collins said.

“We do, however, ask to be treated equitably,” he said. “In recent days, it is becoming more difficult to believe that is happening.”

What you need to know about fetal cell lines and vaccines