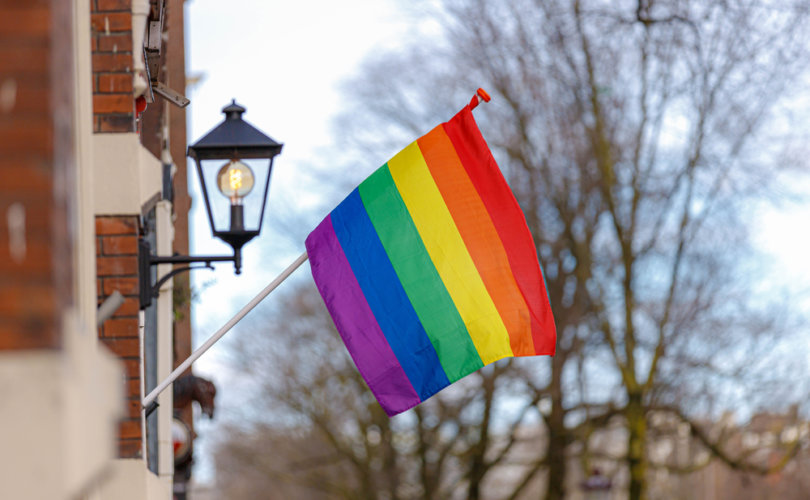 TORONTO, March 8, 2021 (LifeSiteNews) – Trustees at Toronto’s Catholic school board voted unanimously last week to acknowledge and “refer” for further consideration an LGBT activist’s request that all Catholic schools within the board recognize June 2021 as “Pride month” and fly the rainbow “pride flag.”

At the same meeting, however, the board voted 9-3 against even acknowledging the statement of a Catholic father with two children attending a board-run school who raised his concern about the board contravening Catholic teaching if it were to recognize “Pride month” or fly the rainbow flag.

Toronto Catholic District School Board’s (TCDSB) March 4 meeting kicked off with student LGBT-activist Stephanie De Castro accusing the board of “systemic homophobia” before asking the board to declare June as Pride month and to fly the rainbow flag.

“Today we ask that the board sees fit that this June 2021 be recognized in all Toronto Catholic District Schools as Pride month as a step in the right direction to develop solidarity in this fight to end homophobia,” De Castro said in her presentation to the board via video call.

“To allow students to see representation in their own school walls by allowing the pride flag to be raised sending a clear message that we, as a Catholic community are accepting of others,” she added.

The event was a regular meeting of the “Student Achievement and Well-Being Catholic Education Human Resources committee where Garry Tanuan is Chair and Teresa Lubinski is Vice-Chair.

After De Castro’s presentation, the board voted unanimously to not only acknowledge “receipt” of it, that is, to officially acknowledge reception of it, but also to “refer” it to staff for further investigation to determine what action, if any, might be undertaken.

A Catholic dad, with two children in a school belonging to the board, who also made a presentation to the same committee that evening, received a very different reception.

Jody Maillet, in a presentation titled “Maintaining Catholic Teaching in Our Schools,” told the committee that he was “concerned” about a proposal to “recognize or celebrate gay pride month and fly the gay pride flag over our Toronto schools.”

“I oppose this, and I ask that you do as well,” said Maillet.

“The reason why is simple: Because gay pride is not compatible with the Catholic faith. You have a spiritual and moral duty to ensure a compassionate, caring, and loving Catholic environment at our schools.”

Maillet went on to quote what the Catholic Church teaches about homosexuality.

“The Catechism of the Catholic Church addresses this with three simple paragraphs. Paragraph 2358 says that we must accept the person with ‘respect, compassion, and sensitivity,’” he said.

“This is true of course. I’ve seen this section used by lobbyists without quoting its sister paragraphs, 2357 and 2359,” he added.

Maillet told the board that groups who support such relationships have no place in Catholic schools.

He went on to tell the board that paragraph 2359 of the Catechism “points the way” for how Catholic schools should care for students who experience same-sex attraction.

Maillet concluded his presentation by quoting Jesus’ warning in the Gospel of Matthew to adults who cause children to fall.

Trustees then voted on whether or not to acknowledge receipt of Maillet’s presentation. There was not any move made to “refer” his presentation for further consideration. Nine trustees voted against acknowledging receipt with only three voting in favor.

The trustees who voted against acknowledging receipt of Maillet’s presentation were:

The trustees who voted in favor of acknowledging receipt of Maillet’s presentation were:

While the TCDSB has as its motto “transforming the world through witness, faith, innovation & action,” its explicit promotion of the LGBT agenda leaves many Catholics questioning exactly what faith the board is witnessing to.

Earlier this year, the board defended reposting a link on its website to LGBT resources for students. Parents were shocked to discover that in exactly three clicks from the TCDSB website, children were able to access homosexual guides to finding gay sex by “cruising” or in “parks and public washrooms,” how to engage in “f*sting,” and “how to have lesbian sex.”

“That a Catholic should be criticized, and effectively be prevented by Catholic trustees from reading from the Catholic Catechism at a meeting of a Catholic school board is simply reprehensible,” Collins wrote in a private letter addressed to board chair Joe Martino (click here to read letter).

“If Jesus Himself were to attend a meeting of the Toronto Catholic District School Board, I wonder if He would be interrupted, if he were to begin to say: ‘Repent, for the Kingdom of God is near, or many other things He says in the Gospel, because those words are perhaps not sufficiently soothing, and perhaps might offend,” added the cardinal in the November 17 letter.

“The heretics have gone wild,” he told LifeSiteNews. “They are now open and brazen in their hatred of Catholic sexual teaching.  Faithful Catholics and non-Catholics in the school system have to mobilize to defeat these heretics in the 2022 municipal election, or to force their resignation beforehand.”

Fonseca called on Cardinal Collins to intervene in the situation.

“Where is the Cardinal Archbishop in this spectacle of public heresy? In recent times, he publicly threatened to punish faithful priests if they were to reverentially give Holy Communion on the tongue, in order to respect the Blessed Sacrament. Can he not muster any of that anger to rebuke these heretical trustees who are so brazenly dismantling the Catholic faith in the TCDSB and putting souls in jeopardy,” he said.

“His Eminence must end his silence and provide the spiritual leadership that he owes to the flock, and Christ. There is nobody else on whom the buck stops.  He is the one who must demand the resignation of the dissident trustees,” he added.