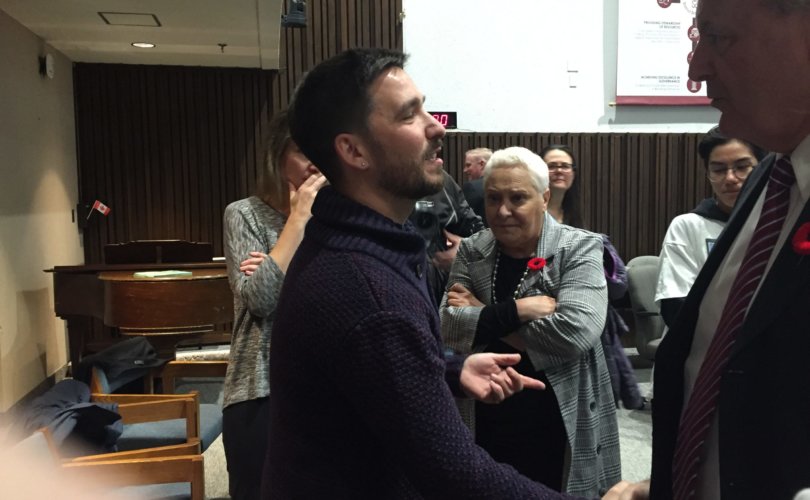 Kyle Iannuzzi is congratulated by Toronto Catholic school board trustee Markus de Dominico as board chair Maria Rizzo looks on.

TORONTO, November 11, 2019 (LifeSiteNews) — A Catholic school trustee who successfully fought to have the Toronto Catholic District School Board (TCDSB) adopt transgender ideology in its code of conduct suggested during the battle that the Church no longer has “judgmental teaching” against homosexuality and transgenderism.

The matter began with an October 2018 Ontario provincial ministry of education directive, (PPM 128), asking school boards to add the terms “gender identity, gender expression, family and marital status” to their codes of conduct, which govern students and teachers, by November 4.

Campaign Life Coalition, Parents As First Educators, and other groups and parents appeared before the board over months to argue adding the terms will enshrine the spurious gender ideology in Catholic schools in violation of Church teaching with disastrous consequences for students, and that Catholic schools have a constitutionally protected right not to adopt the terms.

Nevertheless, TCDSB trustees voted 8-4 last week to approve the policy amendment. A report added to the agenda shortly before the meeting said the archdiocese had agreed to add the terms after consultations with TCDSB staff, provided these were interpreted through a Catholic lens.

The vote was preceded by eye-opening debate sparked by several delegations, beginning with LGBTQ activist, open homosexual, and former Catholic school student trustee Kyle Iannazzi, in what was at least his second appearance before the board on the issue.

Iannazzi told trustees that he hoped adding the terms would cause Catholic teaching on gender to disappear, according to Teresa Pierre, president of Parents As First Educators (PAFE) in an email to supporters.

Iannuzzi characterized the policy amendment as “a matter of life and death” and said it was needed to prevent suicides of LGBTQ youth, adding that he contemplated suicide because of bullying as a student in the TCDSB.

That led to a heated exchange between Chris Elliott, a parent delegate opposed to the policy, and trustee Markus de Domenico.

But de Domenico retorted that Iannuzzi was bullied because of the Catholic faith.

“Our system that we have now does not believe in the issues that gave Kyle and the folks like Kyle that kind of bullying problem. Fundamentally, we don’t believe in it,” de Domenico added.

Elliott then told de Domenico that he should resign.

“If you are vehemently opposed to the teachings of the Church … you should have the integrity to step down,” he said. “And you are.”

“The reason I won’t step down is I do have integrity. I do believe in the system and I will defend that system against ignorance,” replied de Domenico, to rousing cheers from a contingent of LGBTQ activists waving small rainbow flags.

Elliott also questioned whether the archdiocese had approved the policy amendment.

The Ontario Association of Parents in Catholic Education (OAPCE) and parent Carla DeSantis spoke in favor of adding the terms, as did the Ontario English Catholic Teachers’ Association (OECTA), which sent a delegation to an earlier meeting claiming  the Catholic teachers’ union spoke for all teachers in its support for the amendment.

However, at least one teacher argued against adding the terms at an October 30 meeting of the TCDSB Catholic values subcommittee.

“Our willingness to sacrifice and suffer for Christ were the very seeds through which the Catholic School Board became very successful and attracted students and families that had no interest in becoming Catholic,” Guy noted.

The basis for human rights is “objective truth,” pointed out Guy, a religion teacher at an all-boys school.

“For this reason, we must not drift from the objective truths that our faith has relied upon and are safeguarded by our fidelity to the magisterial teachings of our faith.”

Chair Maria Rizzo asked if Guy knew OECTA had made a delegation and claimed it spoke for all teachers.

Guy said he knew, adding that “God puts limits on our intelligence … but not on our foolishness.”

Campaign Life has launched a petition asking Rizzo to resign based on her campaigning to pass the policy amendment.

Rizzo pushed for a vote on the policy amendment November 7, despite protests by trustees Michael Del Grande and Teresa Lubinski, who said people needed more time to respond to the report that the archdiocese had approved the terms.

Nov. 12, 2019 update: This article originally stated archdiocesan spokesman Neil McCarthy did not respond to requests for comment on Monday. He did, however, send a link by email to a statement provided by the diocese that is now included in this report.