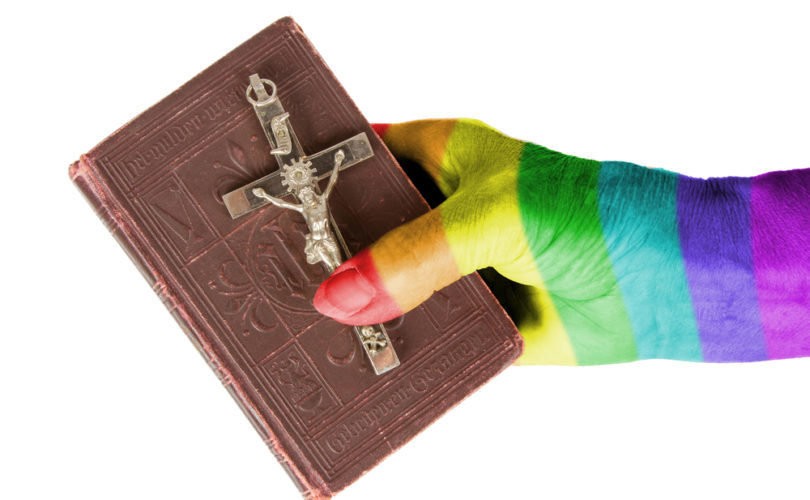 TORONTO, February 18, 2015 (LifeSiteNews.com) — Although teacher Danny DiLallo is admittedly “passionate” about his work with a gay-straight alliance (GSA) in an Ontario Catholic school, he recently encountered a passion seemingly as strong as his own, after publicly denying that the Catechism says homosexuality is disordered.

DiLallo, a co-founder of the GSA “No Names” at Markham’s Father Michael McGivney Catholic Academy, gave a presentation on his group at a February 12 seminar on “Sex and sexuality” at Toronto’s Humber River Hospital, along with six of his students.

But a low-level ruckus broke out after concerned grandparent and former Catholic school teacher Lou Iacobelli questioned DiLallo on his Catholic sources, and the teacher referred to the Catechism and the Bible. When Iacobelli observed that, “the Catechism says homosexuality is disordered and what you need to do is–” DiLallo interrupted. “No, it doesn’t,” he said.

“Yes, it does! You haven’t read it, sir,” Iacobelli rejoined. “Don’t tell people what isn’t true!”

Up to that point, DiLallo and the teenaged girls with him had enjoyed a sympathetic audience, which clapped appreciatively after each student talked about No Names, formed to provide a safe place for students who identify as gay, lesbian, transgendered or other variant “sexual identities.”

“We don’t like to call it a GSA,” said one student. “We find the terms ‘gay’ and ‘straight’ to be exclusive, because we encompass all sexualities.”

The group’s other purpose is to educate fellow students about “homophobic-related bullying” and, as mentioned in the introduction, to “change the views and negative stereotypes of gender and sexuality.”

Ontario’s Bill 13, The Accepting Schools Act, which came into effect June 2012, mandates that publicly-funded schools, including Catholic schools, allow the formation of a GSA if requested by a student.

“I wish all Christians I met in the world were like your school and you,” enthused one seminar attendee. “You guys have to revolutionize your faith.”

Preceding DiLallo and No Names was Jeremy Dias, founder of the Ottawa-based homosexual advocacy group Jer’s Vision, who spoke on “promoting diversity.” At one point, Dias declared, “Danny is a genius.”

In his preamble, DiLallo said that teachers in the Catholic system “struggle with” a major issue: “They believe that Catholicism is against homosexuality.” His colleague, he added, “said they like to use religion as a weapon, and we’re trying not to allow them to hijack religion, to use it as a weapon.”

So DiLallo “had to try and find different research from different organizations within the Catholic faith and doctrine, to sort of relate to the work that we do.”

What he found, as he told Iacobelli, was the Catechism, and the Bible.

Iacobelli, who blogs at Everyday for Life Canada, thinks that DiLallo’s summation of the Catechism is a “moral deception.” DiLallo focuses almost exclusively on respect, and overlooks the rest.

The Catechism clearly states that persons with “deep-seated homosexual tendencies” “must be accepted with respect, compassion, and sensitivity” and “every sign of unjust discrimination in their regard should be avoided.”

But it also describes the inclination to homosexuality as “objectively disordered.”

It makes the distinction between the disordered inclination to homosexuality, which “constitutes a trial” for many people, and homosexual acts, which are “acts of grave depravity.”

“Under no circumstances can they be approved,” the Catechism adds.

That DiLallo and his students are aware of the distinction between the homosexual inclination and homosexual acts was made clear at the seminar, when one participant asked whether a GSA in a Catholic school could be perceived as an endorsement of prohibited sexual activity. “I don’t know what the perception of No Names is,” said one student, “but we’re not going out and saying, ‘Let’s all have gay sex!’” She added, “There’s a difference between sexual orientation and sexual behavior.”

“Why would anybody have that perception, that by trying to support gender and sexual identity in someone who’s gay or lesbian, equals any kind of sexual activity?” DiLallo said. “There’s no correlation between the two, you’re talking about identity, and supporting people who identify with something other than being heterosexual, you’re not talking about anything to do with having act.”

This Iacobelli finds disingenuous. While DiLallo may make the distinction between homosexual inclination and homosexual activity, that “distinction is so fine” to impressionable adolescents, they could be easily misled, he told LifeSiteNews in a telephone interview. DiLallo doesn’t seem to understand he is dealing with teenagers, who are easily manipulated. A teacher has to be careful not to abuse his authority, Iacobelli said.  “I’ve been there. I was a teacher for 34 years.”

However, DiLallo sees himself as responding to students’ concerns. He told the seminar that according to the school’s “climate survey,” which Bill 13 mandates every two years, only three percent of Father Michael McGivney’s students feel unsafe. But the survey also showed a majority of students “specifically see that homophobic-related bullying is the top concern.”

“Now, again, when you think about a Catholic school, not just what we would be teaching, especially in our religion classes, but what these students are going home to,” DiLallo said, “they’re going home and they’re hearing from their parents what their parents believe, yet they still as young people recognize that homophobia-related bullying is the biggest, is the greatest concern. So something needs to be done.”

The No Names club is “the benchmark” for GSAs “especially as far as the Catholic system is concerned,” DiLallo claimed. “I know for a fact that in the York District Catholic School Board, that they are the model on which other schools build their GSAs around. In fact, they were mentioned at the directors’ conference with [Ontario premier] Kathleen Wynne when they were speaking about implementing GSAs in schools.”

When contacted later by LifeSiteNews, DiLallo said he couldn’t comment. Lou Paonessa, principal of Father Michael McGivney Catholic Academy, also refused comment and referred LifeSiteNews to York Catholic District School Board communication manager, Sonia Gallo. The board had not returned a call from LifeSiteNews by deadline.

What Iacobelli found most revealing was how the students responded to his concerns. Frequently dissolving into laughter, they told a “parable” about a similar situation, with their taxi driver, who had reacted to their evening’s stated mission with a 45-minute dissertation on why homosexuality is wrong.

“He kept bringing up religion and he kept telling us that this is not what God has planned, and we, we took it positively,” one said. “We didn’t argue with him, we respected his opinion,” piped up another, while one added, “It was a learning process for us, too, because now we know what are some of the things that cloud people’s judgment and cause them to make these kinds of opinions.”

It was obvious from the way the students talked that they had little idea of, or even regard for, Catholic teaching on homosexuality. “The whole thing is misguided,” Iacobelli said with a sigh. “Why are we playing these games?”