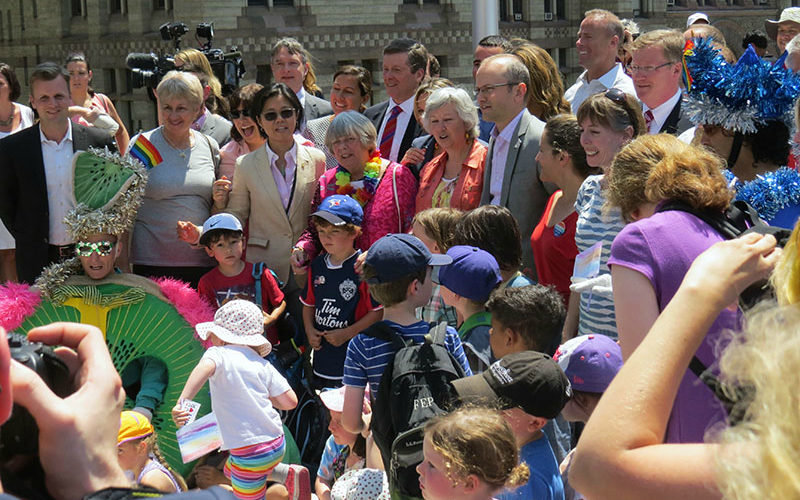 Toronto politicians and Gay Pride organizers pose for a photo op with young children at the flag raising ceremony on June 22, 2015.Blogwrath.com

TORONTO, June 26, 2015 (LifeSiteNews) — About 20 children, appearing to be kindergarten age, were given front row seating at Toronto’s “Gay Pride” flag raising ceremony this week at city hall. During one city councilor’s speech, she spoke directly to them and told them to “make sure the work is carried forward” of promoting the acceptance of homosexuality in society.

“Because we know the work [is] never finished, we’re going to rely on you little guys and gals to make sure the work is carried forward.”

“Because we know the work [is] never finished, we’re going to rely on you little guys and gals to make sure the work is carried forward,” lesbian Councillor Kristyn Wong-Tam told the youngsters from Clinton Street Public School in the Toronto District School Board at the June 22 event.

The children, who were led to the event by two activists dressed as fruits — a kiwi and a blueberry — were handed mini gay pride flags and were used by the mayor and other homosexual activists for a photo op.

“When Toronto acts, I hope the rest of the country indeed does follow,” Tory said in his speech, in which he focused on differentiating himself from former Mayor Rob Ford who on principle did not attend one Gay Pride Parade during his years as mayor.

“I have been proud to attend many Pride Festival flag-raisings right here over the years and now I have the privilege to be here in 2015 as an enthusiastic, supportive mayor in Toronto,” he said.

“My entire family will march with happiness and enthusiasm at this year’s pride parade,” he said at one point, adding: “You have a friend in the mayor of Toronto.”

A blogger from Blogwrath filmed the event and published the video and photos. In the blogger’s view, when compared to the past years, this year’s event “looked and sounded like a homosexual victory party.”