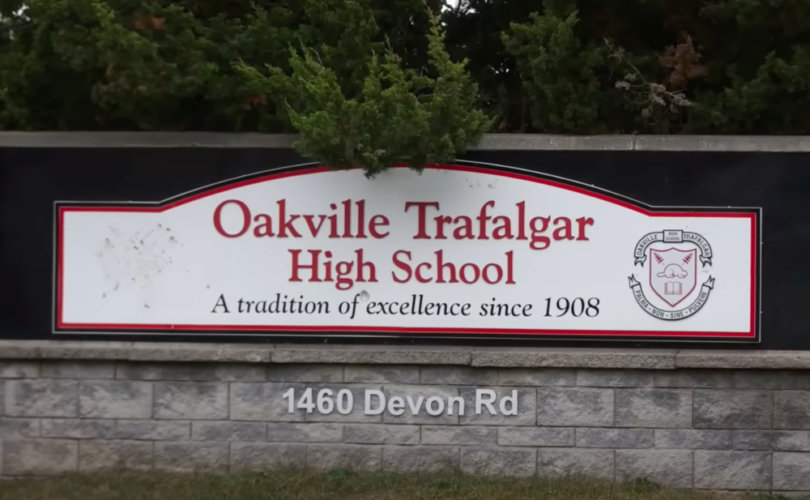 OAKVILLE, Ontario (LifeSiteNews) — A Canadian high school is defending a teacher who made headlines when he wore massive prosthetic breasts to class.

After videos and photos of the male teacher, who calls himself Kayla Lemieux, went viral, Oakville Trafalgar High School took  the stand that this teacher’s behavior is acceptable because of “gender inclusivity.”

The school administrators stated that they “are aware of discussion on social media and in the media regarding Oakville Trafalgar High School. We would like to take this opportunity to reiterate to our community that we are committed to establishing and maintaining a safe, caring, inclusive, equitable and welcoming learning and working environment for all students and staff.”

“As a school within the Halton District School Board, Oakville Trafalgar High School recognizes the rights of students, staff, parents/guardians and community members to equitable treatment without discrimination based upon gender identity and gender expression,” the email continued.

Look what the school wrote to parents pic.twitter.com/Wdz9cXQyeX

Oakville Trafalgar High School also strives “to promote a positive learning environment in schools consistent with the values of the HDSB and to ensure a safe and inclusive environment for all students, staff and the community, regardless of race, age, ability, sex, gender identity, gender expression, sexual orientation, ethnicity, religion, cultural observance, socioeconomic circumstances or body type/size.”

However, the photos make it clear Lemieux’s “gender expression” does not fall within the norms of business attire appropriate to female teachers. Instead Lemieux, who teaches industrial arts classes, choose to wear a blond wing and enormous, cartoonish fake breasts, the nipples clearly visible through the fabric, which swung down to his waist.

“This is disgusting,” said Fox News host Tucker Carlson, in a video tweeted by Rebel News. “This is the abuse of children.”

He noted that, in defending Lemieux, the school board failed to acknowledge complaints that his behavior went against the school board’s dress code, which states that “dress codes must prevent students from wearing clothing that exposes or makes visible genitals and nipples.”

“Oh, ok, that’s the policy, but it applies to students!” said Carlson. “So this guy is free to wag his prosthetic breasts in the faces of kids.”

Both the teacher and the school have received backlash on Twitter, where people have expressed their outrage that children are being subjected to such sexualization.

“If your goals are to insult biological women, to undermine trans people, and to sexualize yourself in front of the school children you have a duty to protect… congratulations Kayla Lemieux, you’ve earned top marks!” said one tweet.

If your goals are to insult biological women, to undermine trans people, and to sexualize yourself in front of the school children you have a duty to protect… congratulations Kayla Lemieux, you’ve earned top marks! 🎉 https://t.co/oroGIXnq2p

“We need to put these people back in mental institutuons where they belong, where they can’t infect society with their incomplete and illogical views,” another tweeted.

We need to put these people back in mental institutuons where they belong, where they can’t infect society with their incomplete and illogical views.

“What about a safe inclusive environment for the STUDENTS[?]” asked another. “The teachers aren’t the ones that need safety and inclusion here, they’re supposed to sacrifice for the kids. Kids aren’t supposed to be sacrificed for adults.”

What about a safe inclusive environment for the STUDENTS.

The teachers aren’t the ones that need safety and inclusion here, they’re supposed to sacrifice for the kids. Kids aren’t supposed to be sacrificed for adults.

The past 2.5 years though has shown this though.