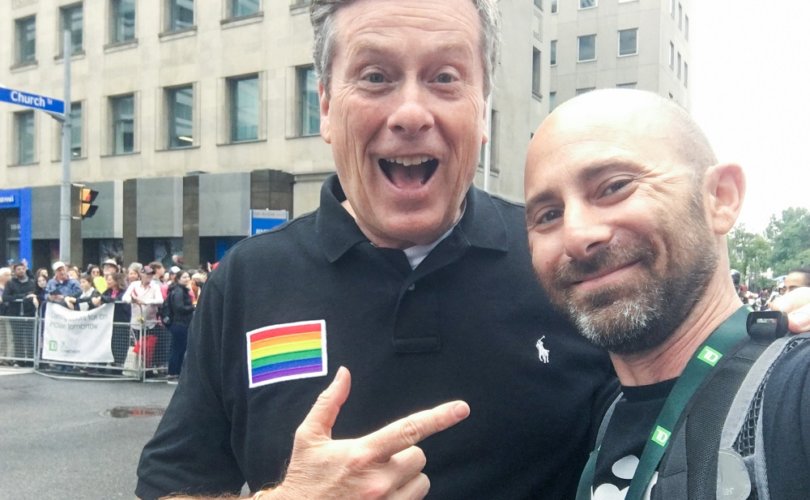 TORONTO, May 14, 2019 (LifeSiteNews) — John Tory, the mayor of Canada’s largest city and the father of four children, celebrated Mother’s Day by attending a drag queen brunch in the heart of city’s homosexual district.

Moreover, a video clip tweeted by Cosmin Dzsurdzsa, senior editor of the Post Millennial, shows Tory slipping a bill into the thong of a drag performer, who then sits on his lap while Tory laughs and rubs the drag queen’s back.

In case you haven't seen the video, here is @JohnTory's rowdy time at a Mother's Day Drag Brunch. #woke pic.twitter.com/XUaV6CgTUP

“John Tory doing whatever it takes to not be called a bigot in 2019,” tweeted Dzsurdzsa, who wrote in the Post Millennial he contacted the mayor’s office for a comment but did not hear back.

LifeSiteNews also contacted the mayor’s office asking why Tory chose to celebrate Mother’s Day at the Drag Queen Brunch at Toronto’s Glad Day Bookstore on Church Street but did not receive a response by deadline.

“thanks for the visit and the conversations – it's important to celebrate every kind of family, and nowhere does that better than our drag brunches!” the business tweeted.

thanks for the visit and the conversations – it's important to celebrate every kind of family, and nowhere does that better than our drag brunches! https://t.co/EpWjZx8XdV

Formerly a businessman and broadcaster, Tory was first elected Toronto mayor in 2014, when he defeated Doug Ford, who went on to be elected premier in a Progressive Conservative landslide last June, while Tory was re-elected mayor in October.

Before his successful career in municipal politics, Tory had a disastrous run as leader of the provincial Progressive Conservatives, beginning with the September 2007 election, in which Dalton McGuinty’s Liberals were re-elected with a majority and Tory himself did not win a seat.

Tory stayed on as leader but resigned in January 2009 after losing a by-election in the traditionally safe Conservative riding of Haliburton-Kawartha Lakes-Brock.

“When you look at that video, you can understand why John Tory was such a terrible failure as a Conservative leader and why he has no support from any of the suburbs,” Gwen Landolt of REAL Women told LifeSiteNews.

“He could never get elected as a Conservative. He certainly wasn’t one. It’s pretty obvious he’s out of touch with the party,” said Landolt, adding that Tory’s behaviour at the drag queen brunch is “not anything that a moderate, reasonable person would find acceptable.”

“John Tory is the failed former leader of the Ontario PCs who alienated the party's base with his left-wing policies. Although Tory claims to be a ‘conservative’, he’s as liberal as can be on moral issues,” says the Campaign Life website, which notes that Tory routinely marches in Toronto’s “Gay Pride” parade.