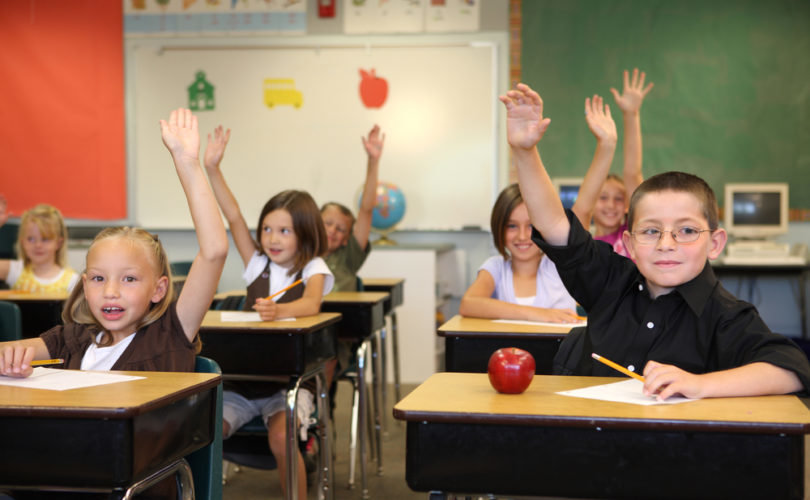 A rash of new private schools opening in the Greater Toronto Area, as reported in the Globe, is also backlash against the sex ed curriculum's rollout in the province's publicly funded schools this September.

All this is proof that the strategy pushed by the Canadian Families Alliance – a grassroots parents' rights coalition formed in June – is working, says Campaign Life Coalition's Jack Fonseca. Simply put, that strategy encourages people pull their kids out of the public system and take their funding with them.

The Toronto District School Board discovered with its November tally that 2,600 fewer students enrolled in its elementary schools than had been projected, with 169,419 students showing up instead of the expected 172,004, the Toronto Star reported Tuesday.

That's left the board scrambling to deal with a $16-million funding shortfall – or a net loss of $2 million after “offsets” are factored in, stated the Star.

Meanwhile, Greater Essex School Board reported an 84-percent increase in elementary students opting out of the public system this fall from last spring, or 138 students choosing private or home schooling to last year's 75, according to a mid-November report in Blackburn News.

TDSB trustee Jerry Chadwick told the Star that opposition to the sex ed curriculum was “one of the factors” behind lower than expected elementary school enrollments. GESB Superintendent of Education John Howitt told Blackburn News much the same, and that his board is going to try to woo parents back.

CLC's Fonseca says all this “is proof that the student strike strategy that was pushed so hard by the CFA and partners like Thorncliffe was strategically brilliant.”

Thorncliffe Park is the predominately Muslim neighborhood in Kathleen Wynne's Don Valley West riding, where the local parents' association staged an unprecedented two-month-long student strike that initially reduced the enrollment of the local elementary school by half, or about 750 students.

While the number of student strikers decreased in the ensuing eight weeks, a permanent loss of 120 students forced Thorncliffe Park Public School to lay off two teachers and merge two Grade 1 classes.

Valley Park Middle School, according to the Star, lost 90 students and, as a result, was forced to drop one class and lay off one teacher.

“Not only did those strikes help spread our parental rights message at the time, through promotion and media exposure,” Fonseca said, but now Ontario's publicly funded school system faces the consequences of ignoring parental opposition to the sex ed curriculum.

The Toronto and Greater Essex school boards' woes are, in Fonseca's words, “little time bombs now going off, even months later,” that “hit the anti-parental rights educational establishment where it really hurts: their wallets.”

“Part of the CFA's plan all along was to encourage so many families across Ontario to either homeschool or privately school their children,” he said, which would “cause school boards to lose the $10,000-per-head, per-year budget transfer, which is based on enrollment.”

“That sends a message loud and clear to the school boards, trustees, and the government, that parents reject this pedophile-influenced curriculum,” Fonseca said

As for private schools, Selena Ross of the Globe and Mail reported in late September that “a handful” of new Muslim faith-based academies had opened in the GTA: one in Toronto, two in Etobicoke, and at least two in Mississauga. There is one in Scarborough.

The ministry of education requires that founding members file “notice of intention to open a private school.” According to the Globe, the ministry reported 148 notices filed this September, compared to 94 for the 2013-2014 school year and 155 for 2014-2015.

Barbara Bierman, executive director of the Ontario Federation of Independent Schools, told LifeSiteNews that while “the numbers potentially related to the new curriculum” won't be available until next fall, “I can tell you anecdotally that our schools are seeing an increase in inquiries where parents are citing the health curriculum as an issue.”

Jules de Jager, executive director of the Ontario Alliance of Christian Schools, said that OACS member schools – 69 in Ontario and one in PEI – have had a total 3.5-percent increase in enrollment from last year.

One of these, Wallaceburg Christian School, had a 65-percent increase in enrollment this fall, going from 58 students to 88, according to Laurie Hooyer, a member of the school's administrative team.

But while 15 new families opted to send their kids to the private JK to Grade 7 school, “what their reasoning was behind it, whether it was strictly sex ed change, I can't tell you for sure,” she said.

While “some” parents may have pulled their kids from public school because of the sex ed, Hooyer says her school offered a “special promotional program” this fall, in which “we have given free tuition to those families new to Christian education.” All that's required of parents is a $100 administration fee.

De Jager also said he can't vouch for a causal link between increased private school enrollment and the sex ed curriculum, nor does he know of any Christian private schools starting up as a response to the curriculum, he told LifeSiteNews.

But he finds it “no surprise” that the new private schools opening in the GTA are Muslim schools. “I think the Christians have sorted out some of these things, and we have much more freedom within a curricular structure at the elementary level,” he observed. “And the Muslim community is probably catching on to that.”

Among these new schools is the Mississauga-based GTA Academy, founded by Milton mother of three Hala Khairy after she and her husband discovered that the established Muslim schools had waiting lists, leaving them wondering where to school their children, now in Grade 9, Grade 4, and senior kindergarten.

“It came to our minds: why wouldn't we start this? We could help the community, save our kids,” Khairy told LifeSiteNews.

Parents pay $375 a month to send their children to the school, housed in a former learning center on Brunel Road. Three full-time teachers and four “subject” teachers are paid to teach the 21 students, currently enrolled in junior kindergarten to Grade 7.

“People had to move their kids because of the sex ed,” said Khairy, who has a background in project management. “We don't want the parents to have more burdens.”

She expected twice as many students, so she runs at a deficit right now, despite a sympathetic landlord who cut the rent by half. But she's also getting daily enquiries and has four new students lined up for January.

“It's perfect to me,” Khairy said. “The parents are very happy. … I'm doing everything to make this project running.”