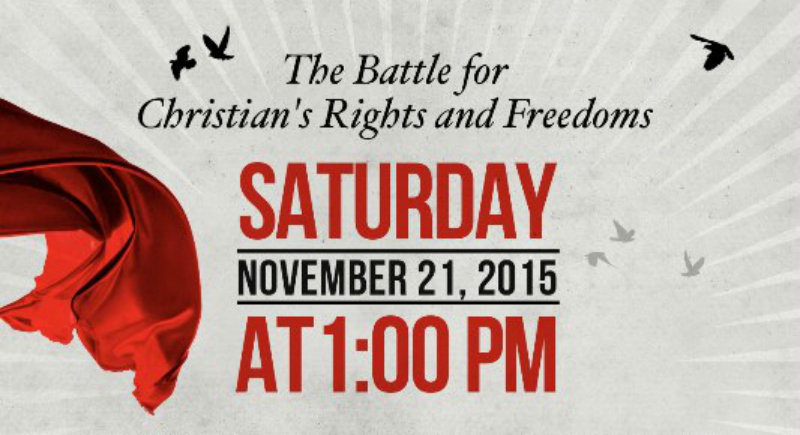 TORONTO, November 11, 2015 (LifeSiteNews) — The City of Toronto has failed to meet Tuesday’s deadline to reverse a ban against a Christian group using a prominent downtown square for its annual musical festival, because musicians sing about Jesus.

As the Christian group plans its next legal steps, a rally has been scheduled to take place Nov. 21 in support of Christian expression in the public square.

“I am hoping that this rally will pull the Christian Community together and help them to know that there is nothing wrong with being a Christian or sharing their opinions or beliefs. The Christian community is united, strong, powerful, and a major influencer,” he told LifeSiteNews.

It was near the end of October when the Christian group Voices of the Nations was denied a permit for its annual event in the City’s downtown Yonge-Dundas Square, where the group celebrates Christianity through live music and dance. The group had been using the square without issue for the past five years. This year’s August 1 event featured 19 different performances, including children’s choirs and popular Christian bands, where well-known ‘praise-and-worship’ songs such as “Days of Elijah” were performed.

When the group contacted the Square’s management to apply for next year’s permit, it was told that a permit would not be issued because the group was guilty of “proselytizing” because its songs included the name of Jesus.

“If you’re praising Jesus, ‘praise the Lord,’ and ‘there’s no God like Jehovah,’ that type of thing, that’s proselytizing,” the Square’s manager of events Natalie Belman told the group.

Last week the Justice Centre for Constitutional Freedoms issued a legal warning letter on behalf of the Christian group to the City of Toronto, demanding that the group’s application be approved by Tuesday, Nov. 10, or the City would face “court action.” The letter called the original decision against the group a “direct violation of the fundamental freedoms of expression and religion which are guaranteed by the Canadian Charter of Rights and Freedoms.”

The Justice Centre’s president John Carpay told LifeSiteNews today that he was “disappointed” that the City ignored the request.

“This is not uncommon, on the part of governments, to ignore matters until such time as they get sued,” he said, adding: “If they choose not to respond then, that's their decision.”

LifeSiteNews reached out to the City of Toronto for comment by phone and email but did not receive a response by press time.

On Monday Voices of the Nations delivered petitions with over 40,000 signatures — 30,000 collected by LifeSiteNews and the remainder by TheRebel.media — to Mayor John Tory’s office demanding that the City reverse the decision.

“Christians have as much right as anybody else to be in a public space and to sing about the faith they hold dear. I respectfully ask that you immediately revoke this decision refusing the permit and that you apologize to this Christian group for violating their rights,” the petition created by LifeSiteNews states. The petition has been signed by 32,800 as of this writing.

News of the City’s decision has spread across Canada, making its way to the attention of Federal MPs as far away as British Columbia.

Bigotry against Christians a serious problem in Canada. I will speak about this in Parliament. @VoicesofNations https://t.co/AKg2H8JnOo

Voices of the Nation’s president Peter Ruparelia told LifeSiteNews that he was saddened that the City has not responded to the petition and reversed its decision.

“To me they are saying to 40,000 people that their opinion does not matter. This is blatant discrimination against Christians,” he said.

Ruparelia said that he will be “taking this to the next level with our legal team.”

He urged concerned Christians to come out and attend the Nov. 21 rally happening at Young-Dundas Square beginning at 1:00 PM.

“I urge every Christian to come out to the rally. Let's show City Counselors and Mayor Tory that we will not sit back and be victimized,” he said.

Editor’s Note: Voices of the Nations is raising a legal defence fund. A secure, online donation can be made at voicesofthenations.com, and clicking on “Make a one time Donation” on the top right.