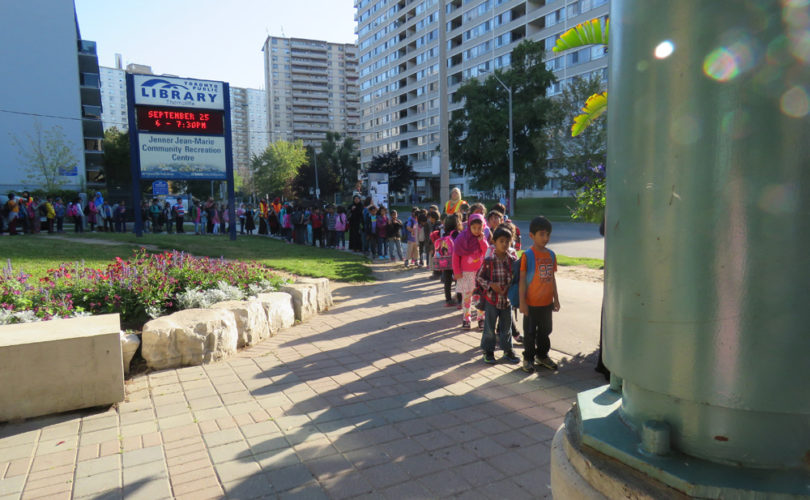 Students involved in Thorncliffe Park's 'school in the garden' walk out of the library where they spent the day.Lianne Laurence / LifeSiteNews

The “No school in September” protest at elementary Thorncliffe Park Public School drew international media attention when parents in the predominately Muslim community pulled about half the students, or an estimated 700 children, out of the school on the first day of class.

The students were then taught in open-air school in a nearby park, in an action organized by Thorncliffe Parents Association, located in a focal point of sex-ed opposition in Premier Kathleen Wynne’s Don Valley West riding.

Within three days, the number of children attending the “school in the garden” fell from 700 on Monday to an estimated 200 on Thursday.

But this Monday, after organizers rallied the community over the weekend, that number had more than doubled.

According to TPA’s Abdul Rauf Janjda, there were 467 children enrolled in the “school in the garden” on September 14 – just under the strike’s midway point. Organizers expect that number to remain constant or even increase, the father of three told LifeSiteNews.

TPA president Khalid Mahmood speculated last week that some parents might have put their kids back in school because of an unsubstantiated rumour that they were liable for a $200 fine.

But Mahmood told LifeSiteNews there are no grounds for a fine if parents notify the Toronto District School Board of their intentions – as the TPA parents did on the first day when they hand-delivered letters stating their purpose and the reasons for the strike to school principal Jeff Crane.

The open-air “school in the garden” moved on Tuesday to Thorncliffe Park Library gymnasium.

TPA is a member of the Canadian Families Alliance (CFA), a grassroots parents’ rights coalition representing more than 25 associations and an estimated 200,000 Ontarians opposed to the Liberal government’s controversial sex-ed curriculum.

CFA contends that the curriculum violates children’s innocence by pushing an age-inappropriate and dangerous sexual agenda, and it is urging other parents and associations to follow Thorncliffe Park’s example.

Mahmood says concerned parents in other jurisdictions are pulling their children from school, but are not “group homeschooling” as TPA is, and so are not as visible as the Thorncliffe Park “school in the garden.”

But a spokesperson for the Peel District School Board, which covers Brampton and Mississauga – other flashpoints of protest against the sex-ed – told LifeSiteNews that he has not heard of similar protests in that district.

Brian Woodland said that schools in the PDSB had sent parents a letter that explained that the “Healthy Sexuality components” of the curriculum will be taught the spring. It stated that the board will send parents detailed, grade-by-grade parent guides on the curriculum in October.

The letter, by director of education Tony Pontes, also informed parents that no opt out would be permitted on those sections of the curriculum that deal with “inclusion” and under Ontario Human Rights Code protection, such as “different kinds of families.”

Ryan Bird, spokesperson for Toronto District School Board, said he thought Thorncliffe was an isolated case in the board. “I think there have been a small handful of schools that have been affected by absences that are thought to be related to the new curriculum,” he said, but contended that the “number of absences are declining.”