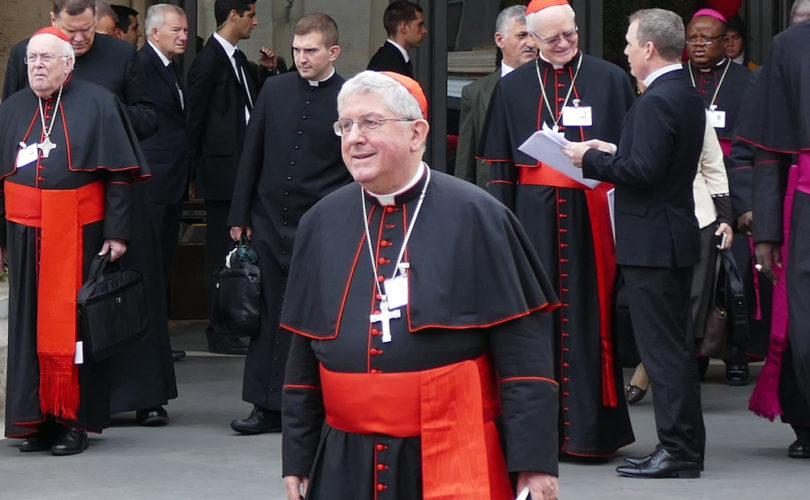 Toronto Cardinal Thomas Collins leaves the hall at the Synod on the Family.Patrick Craine / LifeSiteNews

“I don’t know where they’re coming from, either Cardinal Wuerl or Fr. Rosica,” Collins said from Rome in a phone interview with Toronto Star last week. “The Holy Father has been really clear: If you’ve got some concerns you express them. That’s hardly opposing the Pope or something; that’s ridiculous. What do we want, everyone to say nothing?”

Collins was one of a dozen or so Synod fathers who signed a letter to Pope Francis expressing concern over the direction taken by the Synod on the Family. He said he was simply fulfilling a cardinal’s duty to give “candid and honest advice to the Pope” when he put his name to the letter.

Cardinal Wuerl, in an interview with the Jesuit-run periodical America Magazine, harshly criticized those who had signed the letter. “I wonder if these people who are speaking sometimes surreptitiously, sometimes halfway implying, then backing off and then twisting around, I wonder if it is really that they find they just don’t like this pope.”

The Star said it received Wuerl’s remarks in an e-mail from Fr. Rosica, a Basilian priest and founder of Canadian-based Salt and Light Television, along with the message: “I fully share Cardinal Wuerl’s assessment.”

Rosica was criticized during the Synod for liberal bias in his summaries of Synod fathers’ interventions. In one of the opening press conferences, for example, Rosica strongly emphasized a call by Synod fathers to soften the Church’s language on the sin of homosexuality.

“There must be an end to exclusionary language and a strong emphasis on embracing reality as it is. We should not be afraid of new and complex situations,” Rosica said. “The language of inclusion must be our language, always considering pastoral and canonical possibilities and solutions.”

On an EWTN broadcast, Robert Royal, editor of TheCatholicThing.org, noted that Rosica’s comments “took people by surprise because it seemed to come out of nowhere. None of the other language reporters mentioned the sensitivity language for homosexuals.”

The confidential letter signed by the cardinals, reportedly delivered to Pope Francis on October 5, was leaked by veteran Vatican journalist Sandro Magister earlier this month.

The letter allegedly raised concerns about “problematic elements” in the Synod’s working document Instrumentum Laboris, about the new synodal procedures that were described as “lacking openness and genuine collegiality” and “not true to the traditional spirit and purpose of a synod,” and about how the “new process seems designed to facilitate predetermined results on important disputed questions.”

Among the signatories were Cardinal George Pell of Australia, Cardinal Gerhard Ludwig Müller, prefect of the congregation for the doctrine of the faith, and Cardinal Timothy Dolan of New York.

LifeSiteNews’ own John Henry Westen, in an editorial last week, called Cardinal Collins act of adding his name on the letter to the pope “heroic.”

“The heroic act of Toronto Cardinal Thomas Collins as one of the thirteen Cardinals to sign on to the letter to the Pope expressing grave concern about manipulation at the Synod caused him much suffering. I met him at a restaurant [in Rome] and he looked very tired. I expressed a simple thanks and offered him prayers on behalf of life and family activists,” he wrote.