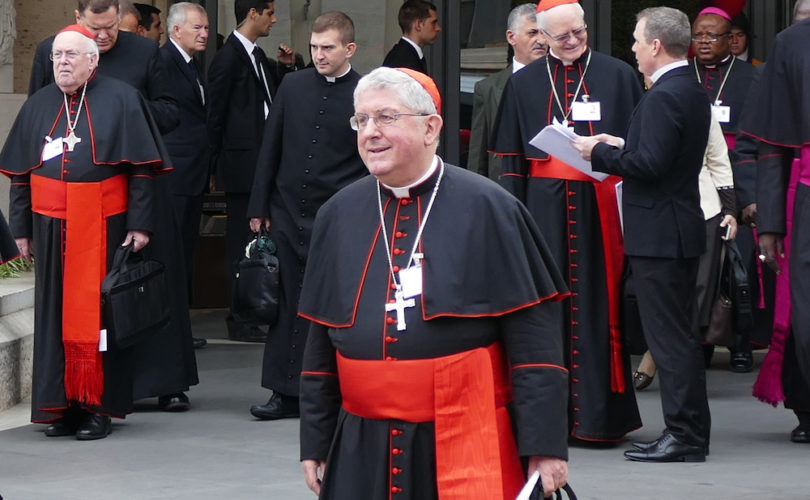 ROME, October 9, 2015 (LifeSiteNews) – As participants and attendees at the Vatican’s Synod on the Family seek greater emphasis on “accompanying” people in sinful situations, Toronto’s cardinal is stressing that true accompaniment must lead people to follow God.

Cardinal Thomas Collins told Catholic News Service on Thursday that during his three-minute intervention at the Synod he used the Gospel account of the disciples on the road to Emmaus to illustrate his point.

“They were going in the wrong direction, actually, and they're going into the night,” he said. “Just to have accompaniment as people are moving in the direction away from the Lord is not enough. We need to be with them in order to help people to follow our Lord.”

“The truest compassionate mercy is a compassion that challenges,” the cardinal explained. Meeting people “where they are” comes first, “but that is only the first thing. The second thing is to help them become what God wants them to be.”

Many have expressed concern that the “accompaniment” proposed by many Synod fathers would involve watering down the Church’s teaching and compromising with sin. The most high-profile example is Cardinal Walter Kasper’s proposal to allow Communion for Catholics who are divorced and then remarried civilly.

Philadelphia Archbishop Charles Chaput warned in his intervention to the Synod, which he published on the website of his archdiocesan newspaper, that the Synod’s working text has a “subtle hopelessness” about the possibility of families living out the Church’s teachings.

“This leads to a spirit of compromise with certain sinful patterns of life and the reduction of Christian truths about marriage and sexuality to a set of beautiful ideals — which then leads to surrendering the redemptive mission of the Church,” he said.