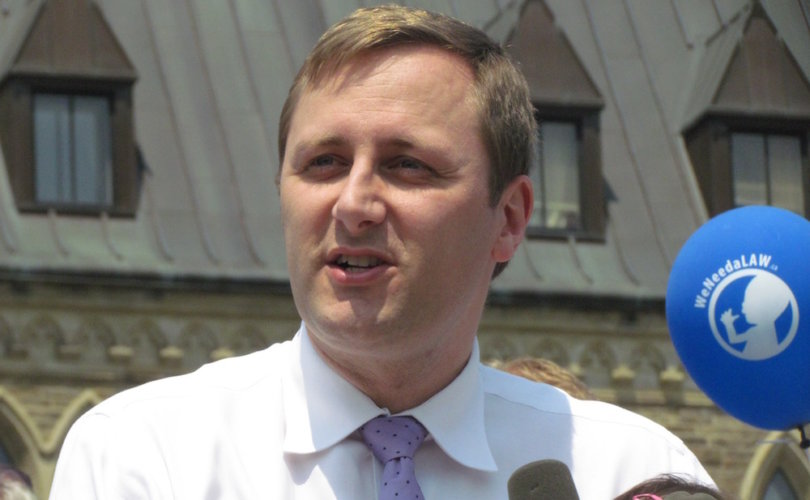 OTTAWA, September 19, 2016 (LifeSiteNews) — It didn’t take long for a pro-family conservative leadership candidate to be accused of discrimination after running an ad on Facebook in which he stated his belief that marriage is the “union of one man [and] one woman.”

Saskatchewan MP Brad Trost’s ad depicts two fingers painted to look like a male and female. A painted red heart joins the two together. The ad states that “marriage is the union of one man [and] one woman.” The ad also quotes Trost saying: “Brad Trost is 100% CONSERVATIVE and will fight for you!”

Trost’s ad has been criticized by media outlets as “attacking same-sex marriage,” “anti-gay,” and “discriminatory.”

But Trost campaign manager Mike Patton told reporters that the ad has nothing to do with being against people who identify as gay but about stating the nature of marriage.

“He has no dislike for gay people. It’s not a lifestyle he would choose, but his issue is he prefers the traditional definition of marriage,” he said.

Patton said that when it comes to marriage, Trost “believes it’s very important for candidates to be clear where they stand.”

“He doesn’t expect everyone to agree with him, but he thinks it’s only fair to know where he stands on these issues so they can make an informed decision,” he said.

“He is simply stating his view on the definition of marriage. Many Canadians don’t — and the Catholic Church doesn’t — recognize or acknowledge ‘marriage’ of two people of the same sex. It is not anti-anything but rather an expression of one’s position on the matter,” he said.

Last month, the 42-year-old backbencher MP launched his run for the leadership of the Conservative Party, billing himself as “100 percent conservative”  on his campaign website, brad4leader.ca. The Christian politician has an impeccable pro-life and family voting record and is an active member of the Pro-Life Conservative Caucus.

Campaign Life Coalition has endorsed Trost, affirming him to be “pro-life, pro-family and pro-faith.”

Earlier this year, the Conservative Party of Canada (CPC) voted 1,036-462 to delete the party’s longstanding policy defining marriage as between one man and one woman.

Trost at the time argued strongly against the motion, stating that retaining the definition of marriage as between one man and one woman “draws a line in the sand” so that people know where the party stands on the issue. He told LifeSiteNews at that time that while the CPC had “not endorsed same-sex ‘marriage,’” the vote raised some “internal contradictions” in making it appear that the CPC now advocates for same-sex “marriage.”

Trost appears to be unfazed by the backlash to his ad, retweeting an article by PressProgress that maligned his ad as an “attack” against gays.

The longtime defender of male-female marriage has recognized for years the threat same-sex “marriage” is to religious freedom.

In 2005 before the country’s same-sex “marriage” legislation passed, Trost spoke boldly in Parliament in defense of male/female marriage, stating that the redefinition of marriage to include two people would be used to “attack” religious freedom.

“The government has insisted that this is a matter of human rights, thus it is implying that everyone who does not agree with it is a bigot. This is a powerful weapon because it implies that the state will later on use its coercive force to crack down on the dissenters who do not share its view of right,” he stated at that time.