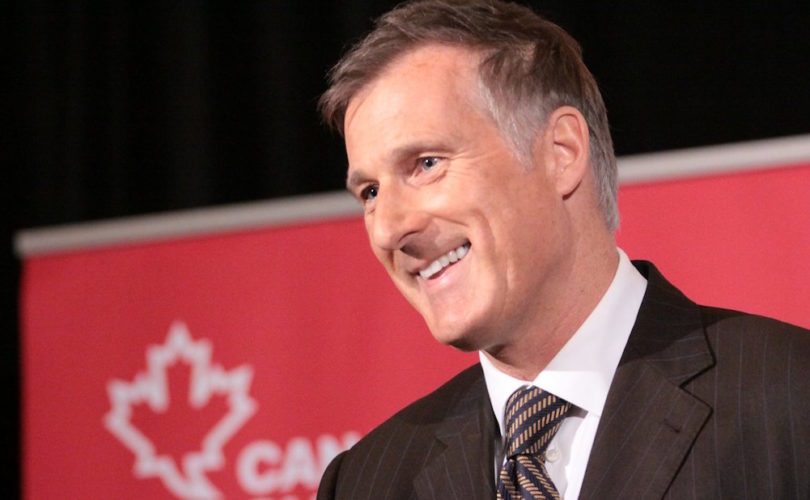 But Bernier, a former cabinet minister dubbed “Mad Max” by his colleagues for his ardent advocacy of small government and libertarianism, has also consistently voted pro-abortion according to the dossier carefully kept by Campaign Life Coalition.

“I don’t know what to make of it,” admitted the CLC’s Mary Ellen Douglas. “But reopening the debate is what’s needed. We have to get people talking about this. A hundred thousand innocent human beings are being killed every year but we are supposed to go mute when it is brought up.”

Conservative Prime Minister Stephen Harper never let his government advance a pro-life measure during his nine years in office. He did permit MPs to bring up private pro-life motions and bills, but fought them and expected cabinet members to vote against them. Bernier, the MP for Beauce, Quebec since 2006, has followed a social conservative voting line on issues related to marriage, prostitution, and euthanasia, but voted consistently pro-abortion.

In 2012 he voted against the Stephen Woodworth’s Motion 312 to study whether a child in the womb is a human being. In 2010 he opposed Bill C-510, “to protect pregnant women from coercion to abort.” For this month’s vote on Bill C-225, Cassie and Molly’s Law, which would have made it a crime to kill her unborn baby while assaulting the mother, Bernier was absent on the campaign trail.

Bernier made his comment about abortion in an interview with the Stoney Creek News, after speaking to a gathering of Conservatives in nearby Hamilton. According to the reporter, Bernier said he would allow a free vote on abortion, something which none of the other federal parties, including the governing Liberals, would do. “I’m open to having the debate if members of my party want that debate. It is a democratic right,” he added.

The admission is consistent with Bernier’s small-government libertarianism, which puts more trust in individual choices and less in governments than do some members of the Conservative Party.

Bernier would not say how he would vote on an abortion bill. “It’s a personal choice. I need to look at a bill first,” he said.

Several candidates for the Tory leadership have been more forthcoming. Former Ottawa-area MP Pierre Lemieux surprised nobody by leading his campaign with his well-known pro-life views, as has Saskatchewan MP Brad Trost. Both have Campaign Life Coalition’s endorsement. Former Commons Speaker Andrew Scheer, on the other hand, though an established pro-lifer by his voting record, has declared he would not re-open the abortion debate. His goal, he has explained, is to “unite” the party, while allowing social conservatives to express their views is apparently divisive.

Bernier has good credentials but a spotty record. He has a law degree, was vice president of the Montreal Economic Institute, and remains invincible in Beauce. However, as a foreign affairs minister he ran into trouble when he appeared at a government social function with his girlfriend Julie Couillard, attired in stunning dress. Under scrutiny she turned out to have dated several Hells Angels before him. He was forced to resign when he left confidential papers on an upcoming NATO summit behind in her apartment.