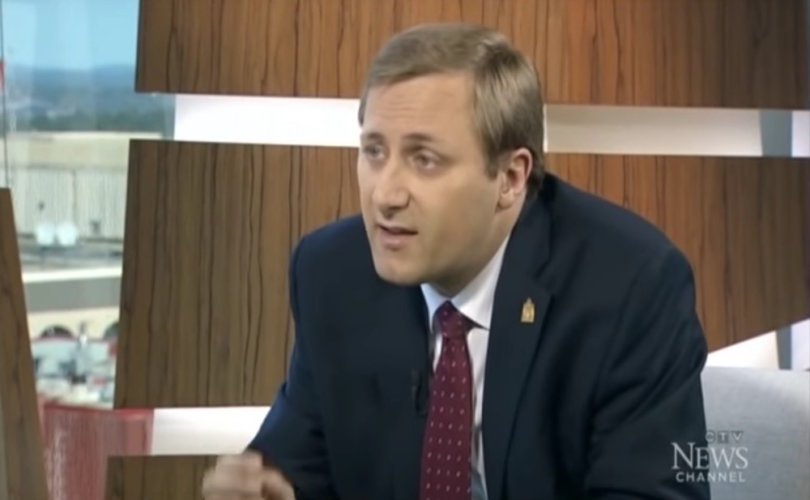 OTTAWA, October 5, 2016 (LifeSiteNews) — MP Brad Trost says he will enact pro-life legislation that is part of the Conservative Party’s current policy if elected prime minister as leader of that party.

The Saskatchewan MP told CTV Question Period’s host Evan Solomon Sunday that he had officially registered in the Conservative Party leadership race, and that his party’s platform supports an Unborn Victims of Crime law, and condemns gender-selection abortion.

Conservative MP Ken Epp introduced the Unborn Victims of Crime Act in 2007, which had passed second reading when the 2008 election was called. Stephen Harper’s second Conservative minority government did not re-introduce the bill, nor did his subsequent majority government.

But the bill is part of the Tory “party platform,” Trost said, adding: “It would be law under a Brad Trost Conservative majority government.”

The Conservatives are also “officially opposed” to sex-selection abortion, or “gendercide,” a platform the Tories adopted at their Vancouver May policy convention.

“It’s a piece of our platform that we need to implement, and I pledge to implement it,” Trost told Solomon. “We would deal with gender selection abortion. [The] whole House of Commons, including the Liberals and the NDP have said this is bad.”

Trost, who said he would be releasing “more in my platform” on pro-life issues, also reiterated his support of traditional marriage when Solomon asked him if as leader he would “put back a definition of marriage that was only between a man and a woman” — a definition deleted from party policy in a highly publicized vote at the May convention.

“I would like to do that,” responded Trost. “And I would be open to a free vote by one of my members, and I would actually vote for that if it came forward.”

Trost, who has come under fire and some scorn — including teasing from Solomon — for a pro-natural marriage ad featuring two fingers inked to depict a man and a woman, said the experimental ad was meant to underscore that “the issue is a live one, because people who believe in traditional marriage are being discriminated against.”

“You look at the court cases Trinity Western University is fighting, you look at parents who are advocating for independence and choice on sex ed for their children,” he said. “People want to have different views on this, so this is still a live issue.”

Trost reiterated his support for parental rights in education, defending his comparison of the Ontario Liberal government’s  sex ed curriculum to the Canadian government’s residential schools program, pointing out that the principle — the usurpation of parental rights by the government — was the same.

And he disagreed with Solomon’s suggestion that the Conservative Party had no place for social conservatives.  “We’re actually growing,” he countered. “There are ways we can reach out to the general electorate and win votes because of this.”

Indeed, Campaign Life Coalition is urging pro-life and pro-family Canadians to join the Conservative Party to vote for a socially conservative leader in the May 2017 election.

For the time being, CLC supports only leadership candidates Trost and Pierre Lemieux, the pro-life former MP from the Ottawa-area riding of Glengarry-Prescott-Russell, although Andrew Scheer, well known for his social conservative views, has thrown his hat in the ring as well.

“Although we have great admiration for Andrew’s perfect voting record, his recent comments require us to pause and re-evaluate,” CLC president Jim Hughes told LifeSiteNews.

“When he declared his candidacy, Andrew told reporters his government would mimic Harper’s policy of not reopening the abortion debate,” Hughes explained. “That is, of course, a denial of basic justice and civil rights to the 100,000 children who are killed by abortion in Canada every year.”

Moreover, Scheer’s stance “goes against what the Conservative Party’s grassroots members themselves voted for at the Vancouver convention,” which was a policy to “support a ban on female gendercide abortions, which target baby girls just because they’re girls.”

Added Hughes: “That’s common sense policy which is supported not only by the majority of Conservative members, but overwhelmingly by Canadians in general.”

He also echoed Trost in pointing out that the Conservative platform calls for an Unborn Victim of Violence Act, “which would punish those who injure or kill an unborn child during a violent attack on his or her mother.”

Scheer also “suggested that pro-life legislation would not survive a constitutional challenge. That’s a problematic statement because it could be interpreted that Scheer believes there is a constitutional basis for the so-called ‘right’ to kill children in-utero,” Hughes stated.

“That’s simply not true. Neither the Constitution nor the Charter espouses a right to abortion. For now, we will continue to study Scheer’s campaign and re-evaluate if necessary.”

“Up until that date, leadership candidates will receive $5 of the $15 membership fee back to their campaigns, as an incentive to encourage new membership recruitment, but you have to join using the candidate’s customized form, not through the party website,” he emphasized.

“And after October 28, candidates will actually have to pay $5 to the party for every new member they recruit,” Fonseca said, adding that CLC has sent out an appeal urging pro-lifers not to delay signing up.

For those who wish to buy a CPC membership to support Trost, CLC provides a link here. For Lemieux, the link is here.