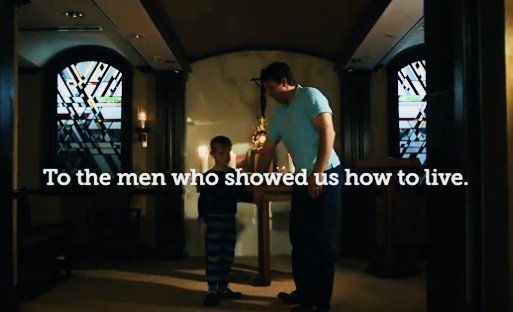 Founded in 2018 by Notre Dame alumnus and father of 12 Michael O’Rourke, Strong Catholic Dad stated its goal as helping “fathers lead their families to heaven.” According to its website, the Indianapolis-based effort designs approaches and tools for fathers and their children for growing together in their Catholic faith. In a series of short videos, Strong Catholic Dad offers guides for fathers who are seeking how to lead and be faith-filled.

Titled “Like Son” and released for Father’s Day, a short video released by Strong Catholic Dad starts with a title saying “What it means to be a strong Catholic dad.” It features a young father and son who get up in the morning and start doing ordinary things together. The young son mirrors his father, trying to shave in the morning and even wanting to follow him to work. They also mow the law together and later play catch with a football.

The video has a folksy soundtrack that sets the mood and features singer/songwriter Holley Maher rhythmically strumming a guitar and singing: “Maybe it's just four walls and the spaces in between, but this is where we wake up and where we fall asleep, and I can't think of another place that I would rather be … 'cause what's inside will bona fide turn a pauper into a queen … what's inside are the things that I need to put my heart at ease, these are the only walls for me.”

When a busy day comes to an end in the film, the father gently puts the boy to bed. Later, though, the father returns in the middle of the night and just as gently puts his son in a car to make their way to an unforeseen destination.

It is then that the source of the father’s love and strength is revealed. Together, father and son enter an adoration chapel where the Real Presence awaits them in a gleaming monstrance flanked by candles and set on an altar. Once the father kneels in reverence, the boy mirrors him by also kneeling and making the sign of the cross.

The video does not record the words the father uses to teach his son, but it is clear that the man is teaching the boy the reality of what they are witnessing.  After praying together, father and son walk hand in hand to leave the chapel as the messages “To the men who showed us how to live” and “Happy Father’s Day” appear on the screen.

The video was produced by Blackstone Films and director John-Andrew O’Rourke. On his website, O’Rourke recalls that when he was a boy his own father took him to adoration of the Holy Eucharist at a chapel.

“I was only 8 or 9, so as you can imagine, it made a big impression,” O'Rourke wrote. “The chapel was entirely dim save for the monstrance at the front, illuminated by candles and a solitary light. I saw my dad genuflect, kneel before our Lord, pray, and read the Bible. He even handed me his rosary so that I could join him.”

The memory remains vivid, wrote O’Rourke, who reflected, “I firmly believe that the most powerful thing a father can do is show his children the importance of faith. Not just tell them, not just say the right things, but show them by how he chooses to live his life.”