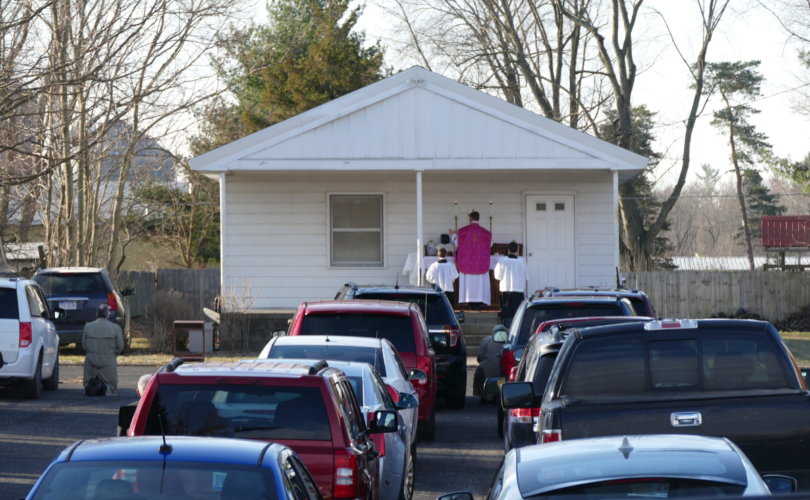 ALLENDALE, Michigan, March 24, 2020 (LifeSiteNews) — Hundreds of Catholics from across Michigan flocked to the small town of Allendale this weekend to attend from inside their vehicles the only public Mass offered in the entire western part of the state.

Fr. David Gillilan of the Society of St. Pius X (SSPX) endured chilly 30° temperatures Sunday morning as he said what some are calling a “parking lot mass” from a wooden altar set up on the porch of the rectory located behind St. Margaret Mary’s Catholic Church.

While no sermon was given and the choir didn’t sing, those who went to the Mass said it was as reverent and as holy as any other Sunday liturgy. “It was sort of like Ireland and the old Mass rocks,” one man who knelt on the concrete outside during the service said. “It was a pretty cool experience.”

The SSPX is a pious union of more than 600 traditional Catholic priests. Founded in Switzerland in 1970, the group maintains that the crisis in the Church is a direct result of the Second Vatican Council. It also claims that “supplied jurisdiction” allows its priests the freedom to operate outside the authority of ordinary diocesan bishops.

Although Catholics can fulfill their Sunday obligation at a Society chapel, and validly and licitly get married and confess their sins to an SSPX priest, many theologians still consider the group to have an “irregular” canonical status. Relations between Rome and the Society on the latter’s “normalization” are a frequent point of discussion among traditional Catholics. Some believe that it would help defeat modernism in the Church, while others, like the SSPX “Resistance,” believe that it would result in the Society compromising their faith.

On a normal weekend, St. Margaret Mary’s sees upwards of 200 laity at its 9:00 A.M. Sunday Mass. According to one of the ushers who helped direct cars to their parking spots, Sunday’s liturgy saw an increase of more than two dozen new attendees who don’t regularly go to the chapel.

One of the possible reasons for the uptick is that Catholics not only in Michigan, but throughout the United States have been left without access to the sacraments, as the COVID-19 outbreak has resulted in most every American bishop canceling public Masses in his diocese.

In order to help maintain the spiritual well-being of their parishioners, Catholic priests are resorting to drive-thru confessions, outdoor adoration, and broadcasting Mass online. For its part, LifeSite has launched a rosary crusade that is being live-streamed on the LifeSite Connect app. Download the app today by clicking here, and you’ll be able to pray the rosary with Fr. Anthony Pillari every day at 12:00 P.M. EDT.

On Monday, March 23, Michigan’s Democratic governor, Gretchen Whitmer, issued an order putting the state on lockdown for the next three weeks. She previously restricted public gatherings of more than 50 people but exempted religious communities from being punished if they violate that limit.

Fr. Jurgen Wegner, the district superior of the Society of St. Pius X’s American district, released a statement on March 14 indicating the SSPX is offering a “continuous Mass” for protection during the coronavirus pandemic. He also said Society-run chapels in the U.S. would “follow the lawful government orders” that are handed down.

Society churches are already implementing changes in order to abide by state guidelines and health concerns while ensuring that the faithful can receive the sacraments. In Ontario, an SSPX chapel added a third Mass time in order to keep attendance below 50. In Mukwanago, Wisconsin, a chapel held Mass outside in front of the church while also hosting an additional afternoon liturgy at 4:00 P.M. on top of the normal two Masses offered in the morning. At St. Margaret Mary’s Sunday, separate kneelers were placed six feet apart for the distribution of Holy Communion.

Fr. Gillilan told LifeSite he doesn’t know for certain if another parking lot Mass will be necessary. During his sermon at the Saturday evening liturgy, he preached about how the Church has lived through far worse times but that this outbreak should remind Catholics to be grateful for the sacraments and to not take them for granted.