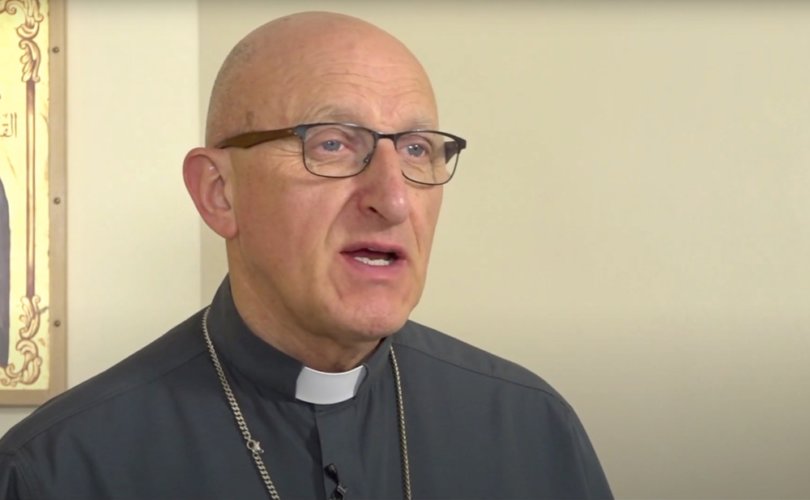 Bishop Dominique Rey of Frejus-Toulon, the only French bishop who regularly ordains his own, diocesan priests using the older form.Mgr Dominique Rey / YouTube

TOULON, France (LifeSiteNews) – Two and a half months after the brutal decision by the Vatican to suspend ordinations planned for the end of June in the Diocese of Fréjus-Toulon on the French Riviera, Bishop Dominique Rey held a meeting with nearly 150 priests earlier this month during which he committed to making a certain amount of changes in his governance. It was also made clear that no information has been forthcoming from Rome regarding the “suspended” ordinations, the official diocesan statement noted. Four priests and six deacons were to have been ordained last June; all the men involved are still in the dark about their future.

During the “frank” exchange, the statement added, the following commitments were made by Bishop Rey:

This raises the question: is the bishop caving in to unjust orders?

Things are more complex: on the one hand, the Diocese of Toulon is known for its flourishing seminary and its welcoming attitude towards traditional communities (but also “new” charismatic groups), on the other, a certain lack of proper discernment has prompted accusations, in particular regarding his readiness to ordain some priests who never followed seminary courses in the diocese and who were unknown to the local presbyterate.

To date, some 50 religious communities are present in the diocese: many, be they “traditionalist” or not, also have establishments in the rest of France, but some, including groups from foreign countries such as Brazil, are present in Fréjus-Toulon. Their style of evangelization has sometimes led to criticism: one such group has been pointed at because it rejects local lay “liturgical teams” or prohibits girls from serving at the altar. Press reports even accuse it of not allowing women to receive Holy Communion, which is highly unlikely to be true.

Bishop Rey told the gathered priests that he made the above-mentioned decisions and transmitted them to the Vatican Congregation for Bishops. They clearly indicate that it will no longer be possible for new groups of priests and religious to be set up in the diocese which up to now has allowed communities and individuals to find a port of rest when more “progressive” dioceses refuse to open their doors to them.

Also a point of concern is enforcement of a modified local “Saint Léonce Charter” which was published in 2020 in view of a better “integration” of priests and communities attached to the “so-called Mass of Saint Pius V” and that now must be redacted to conform with the motu proprio Traditionis Custodes.

This motu proprio issued by Pope Francis in July 2021 severely restricts the rights of priests, and especially of diocesan priests, to celebrate according to the Vetus Ordo. While most dioceses in France, including that of Fréjus-Toulon, have not applied the text with any kind of rigor, it remains a sword of Damocles hanging over traditional communities and over the many young diocesan priests who have discovered the ancient Roman rite and become attached to it thanks to Pope Benedict XVI’s decision to liberalize its use in 2007 through Summorum Pontificum.

The seminary of Toulon is one of the establishments of priestly formation where such more traditionally-minded young men in France choose to go when they do not want to join one of the (former) Ecclesia Dei communities which exclusively celebrate according to the Vetus Ordo – making it one of the country’s most frequented seminaries at a time when vocations in diocesan seminaries are on a new downward turn. Given the indefinite and unexplained suspension of ordinations in Toulon last June, only one new entry was registered this year and according to the traditional association of faithful, Renaissance catholique, that “candidate” was sent to the neighboring diocese of Aix-en-Provence.

Bishop Rey’s explicit mention of Traditionis Custodes in the present context, together with an announcement that all the traditional communities in Fréjus-Toulon will receive a “systematic visit” from the diocesan supervisor named in the wake of the motu proprio, would seem to indicate a tightening of control. Four days after the motu proprio was published in 2021, Rey issued a statement aimed at reassuring local faithful, including the priests of the “Missionaires de la Miséricorde” (“Missionaries of Mercy”) of Toulon, who were founded in the diocese with the aim of evangelizing the numerous local Muslim population following the spirituality of (now-canonized) Charles de Foucauld and Saint Faustina and the use of the traditional liturgy.

“I am a witness to the evangelical spirit and ecclesial communion that prevails in these communities around their bishop,” he wrote at the time, adding: “I want to assure them of my paternal and benevolent attention.” He already added at the time, however, that the “Saint Léonce Charter” would be adapted in order to bring it in line with Traditionis Custodes.

Targeted by the Vatican and Cardinal Ouellet

When the bombshell of the adjourned ordinations dropped at the beginning of June, commentators noted that Dominique Rey was being persecuted by Rome, and specially by the head of the Vatican Congregation for Bishops headed by Cardinal Marc Ouellet, because of his traditional style and openness to priests and groups of faithful who choose to celebrate the Traditional Latin Mass. And it is indeed to that congregation that Rey is making his promises for change.

When Rey insisted that he was unable to ordain members of his community earlier this year, an (unnamed) bishop offered to confer ordinations. These took place clandestinely and abroad in April, without the knowledge or approval of Rey who is his hierarchical superior.

Mgr. Rey hails from the “Communauté de l’Emmanuel,” whose style is charismatic but whose approach to Catholic doctrine and morals is traditional.

During his recent meeting with the priests and religious of his diocese, Mgr. Rey acknowledged deficiencies in his way of governing; he has already undertaken to make more frequent personal visits to the parishes under his care.

He told the assembly how he had presented these commitments to Rome: “I recognized errors of judgment and discernment in the welcoming and follow-up of certain communities, but I also highlighted the missionary fruits and the fecundity of the different charisms and pastoral initiatives of the Diocese. I have taken into account the remarks and errors made, without calling into question the work of missionary communion that we must build together.”

The themes of “unity” and “transparency” were also very present during the exchange with the local priests, some of whom spoke of their “discouragement” and “lack of motivation,” according to the diocese’s communiqué. But many, it added, expressed “support” for their bishop, while representatives of several communities that benefited from Rey’s hospitality thanked him for his “welcome, goodness and paternity.”

As far as can be assessed, Bishop Rey, while in a difficult position, is acting to preserve at least the status quo, with the support of his presbyterate (this can be assumed because of the contrary were true, the progressive Catholic press would most certainly have capitalized on such opposition). When ordinations were “indefinitely adjourned” in June it was generally thought that Rome was in effect putting pressure on the bishop to resign. He has given no sign of going in that direction.

What has transpired is that the suspension of ordinations was signified to Bishop Rey by the Vatican one month before he made the decision public on June 2, according to statements made by Cardinal Jean-Marc Aveline of the neighboring Diocese of Marseille earlier in September. Aveline said the decision to suspend was included in a decree issued on April 28, 2022.

Questions have been asked regarding Rey’s decision to “withhold” this information from the ordinands themselves and from their families. Yves-Marie Sévillia, Bishop Rey’s cabinet director, told the Catholic weekly Famille chrétienne that the bishop had hoped to convince Rome to alter the decision. Sévillia added that there was no decree, only a “letter.”

“Bishop Rey hoped to the very end to be able to maintain the ordinations. He exchanged several letters to obtain more information on this exceptional decision by Rome and to try to organize a meeting in order to negotiate,” Sévillia explained. He said that Mgr. Rey finally did obtain an interview with Cardinal Ouellet at the Vatican on May 30, but it was not successful.

“Two days later, he made the news public. Basically, everything went very quickly. A month went by between Rome’s decision and our official announcement; this was the time needed to organize the meeting in Rome and to wait for the outcome,” noted Sévillia, who clarified that the bishop took care personally to inform the 10 ordinands before going public in order to avoid that they should hear of the decision through the media.

Reading between the lines, it appears that the Vatican decision was not signified according to normal canonical forms and that the reasons for it were insufficiently explained to the bishop.