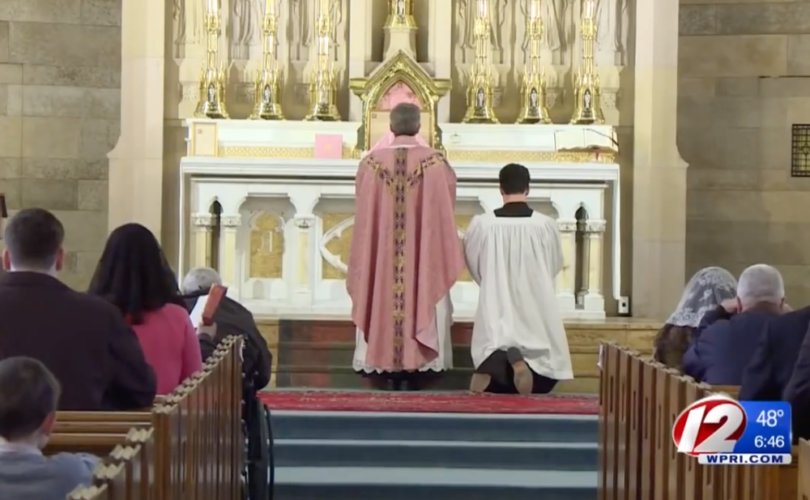 PROVIDENCE, Rhode Island, April 3, 2019 (LifeSiteNews) – A historic U.S. Catholic Church has escaped closure thanks to the return of the traditional Latin Mass.

St. Mary’s Church on Broadway in Providence, Rhode Island was the focus of a WPRI news spot this past Sunday because the ancient liturgy now being celebrated there has increased the congregation, leading to a fuller collection basket and thus a future for the 150-year-old church.

St. Mary’s “is going back in time in order to move forward,” said WPRI News reporter Julianne Lima in the two-minute report.

Lima interviewed Jim Forte, who joined the parish of St. Mary’s a decade ago. Founded in 1853, the parish has been emptying in the past ten years, thanks to unspecified “changes.” Forte indicated that the remaining parishioners knew that their church would close if they couldn’t sustain it financially.

However, the church has been saved thanks to the current Bishop of Providence. In August 2018, Bishop Thomas J. Tobin asked a liturgically traditional order of priests to take charge of St. Mary’s. Father John Berg of the Fraternity of the Priests of Saint Peter (FSSP) is now the pastor and offers Mass solely in the traditional form.

Variously called the Tridentine Mass, the TLM, the Mass of John XXIII, and the Extraordinary Form of the Mass, this form of the Roman Rite has changed little over the millennia. It is said or sung in Latin from liturgical books first published in 1962.

Parishioner Jim Forte said that he was at first “skeptical” about the parish’s return to traditional worship, citing people who told him that if he stayed he’d be “taking a step backwards” and “going back in time.”

Instead, the restoration drew Catholics from all over New England to St. Mary’s: the average parishioner now travels for 45 minutes to attend or, to use traditional language, “assist” at the Mass.

WPRI News interviewed a young man named Jack Marriott, who has been assisting at traditional Masses for four years but had not previously been able to join a traditional Mass parish.

“I’ve been waiting for something like this to come along,” he said. “Something with a full community life that just isn’t offered anywhere near where I live.”

The St. Mary’s website lists a number of pious groups and sodalities that harken back to a time when Catholic churches in Rhode Island were packed on Sundays. They include an Altar Servers Guild in which boys are expected to special prayers every day, and the Rosa Mystica Girls Society, in which girls are asked to offer a ministry of hospitality. There is also a monthly Young Adults’ group meeting.

The website also provides a brief look at the richness of the parish’s history. It quotes the late Bishop Russel McVinney’s description of St. Mary’s on its 1953 centenary as an “illustrious and venerable parish, that bespeaks the vibrant dynamic faith of the Catholics of this area,” venerable for its  “distinguished record of Catholic loyalty and devotedness” and  illustrious  for “the stalwart faith of its people.”

“A full parochial life with catechism, sacramental preparation, devotions, and groups of formation for the youth is offered at St. Mary’s,” wrote the website’s editor.  “We live in the hope that one day, by the grace of God, we will closely resemble the description of the parish given just sixty-five years ago.”

In 2016, St. Mary’s received a grant of $50,000 to restore its historical stained glass windows. Other restoration projects are planned to preserve its traditional interiors and bell-tower.