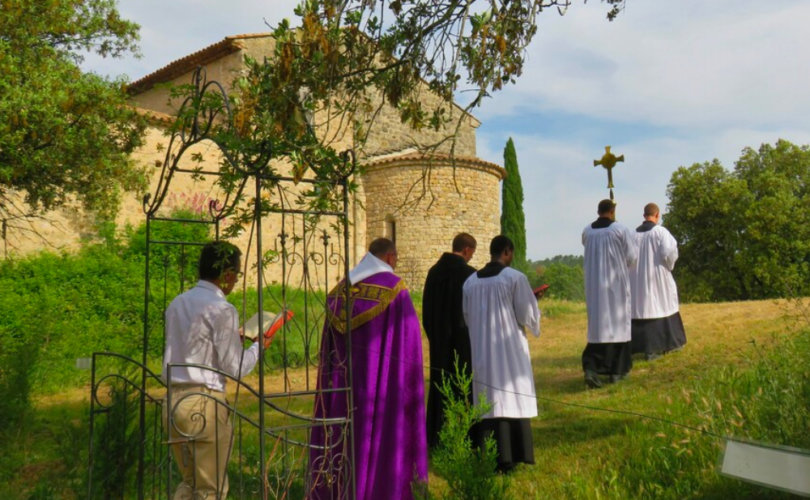 BRIGNOLES, France (LifeSiteNews) – A French bishop has suppressed a traditional group of monks after the community’s prior, Dom Alcuin Reid, was ordained in secret earlier this year.

Bishop Dominique Rey, the ordinary of the Diocese of Fréjus-Toulon, issued a decree June 10 suppressing the traditional Benedictine community of the Monastère Saint-Benoît, after several weeks of turmoil surrounding both the community and the diocese.

The community, dedicated to the traditional liturgy, was founded by Dom Alcuin Reid upon his move to the diocese in 2009, and later approved by notably traditional-friendly Bishop Rey as a public association of the faithful.

Dom Alcuin was for many years a deacon, but was secretly ordained outside of France by an un-named “senior prelate” in April this year, after Bishop Rey reportedly declined to ordain the monk out of “prudence.” Another member of the community, Ildephonse Swithinbank, was ordained as a deacon at the same time.

The monastery defended the ordinations, saying that the event “was for the ultimate good of souls in a truly extraordinary situation in the life of the Church, fearing that if we did not accept this Providential opportunity our own vocations, and those of the young men who wish to come to us, would be jeopardized, if not lost.”

Upon being informed by the monks about the ordination, Bishop Rey suspended Dom Alcuin.

Now, in his recent decree, (details from which, but not the original, are found here), Bishop Rey referenced the “illicit manner” of the two monks’ ordination.

Due to this, along with the suspension which occurred following their ordination, and due also to “their obstinacy in disobedience (refusal to meet with Monsignor Rey or to reveal the name of the bishop who ordained them in spite of several injunctions),” Rey issued his decree of suppression of the community.

The extract provided by the diocese adds:

Considering that the penalty of suspense now affects all the members definitively incorporated in the public association of the faithful “Monastery of Saint-Benoit,” whose seat is located under the jurisdiction of the diocese of Fréjus-Toulon, Monsignor Rey decided to suppress this public association by decree of June 10, 2022, and to withdraw the permission to establish an oratory that had been granted to it.

The community responded by releasing a statement saying that the monks would remain in situ and “live our vows faithfully and wait for better times.” The monastery contested Bishop Rey’s accusation of “obstinate disobedience” was false, and wrote that the motivations for the decree were “highly canonically questionable and indicate undue haste in the preparation and execution of the decree.”

Since news broke of the secret ordination of Dom Alcuin, Bishop Rey – who has historically supported traditional communities and the traditional liturgy – was beset with sanctions from Rome.

On June 2, Bishop Rey, who has headed his diocese for 22 years and boasts one of the most flourishing seminaries in France, was informed by the Vatican that his planned ordination of four priests and six deacons on June 26 was to be indefinitely suspended. While no reason was proffered by the Vatican for the move, LifeSite’s Jeanne Smits suggested it could be in response to the relative flourishing of clergy numbers in the diocese and their attachment to Tradition.

Smits wrote that the decision was “clearly linked to Rome’s focusing on the diocese’s openness to the traditional Mass and has been in the making for many months.”

According to La Croix, Dom Alcuin’s community was “flagged” as “a prime example of one of the grievances made against Bishop Rey: his extensive use of the status of ‘public association of the faithful’.”

Two weeks later, Pope Francis issued a Rescript limiting the powers of diocesan bishops to establish associations of the faithful – of which the monastery is one – ordering that permission must be sought from the Vatican first. Signed February 7, but issued June 15, the Rescript reads:

The new restrictions placed upon diocesan bishops will have the practical effect of stifling the growth of new communities or orders, particularly traditional ones, should they not meet with the approval of the staunchly anti-traditionalist Cardinal João Braz de Aviz, who heads the Dicastery for Institutes of Consecrated Life.

The Pope’s ruling is believed to have been linked to Dom Alcuin’s ordination, although it was signed two months before the ordination took place.

With the clerical future of the Diocese of Fréjus-Toulon currently on hold thanks to the suspended ordinations, it remains to be seen what steps Bishop Rey will take in light of the limits imposed upon him by the Vatican, as well as how Dom Alcuin’s community will seek to “place ourselves at the service of those who may need to seek refuge during … this storm.”