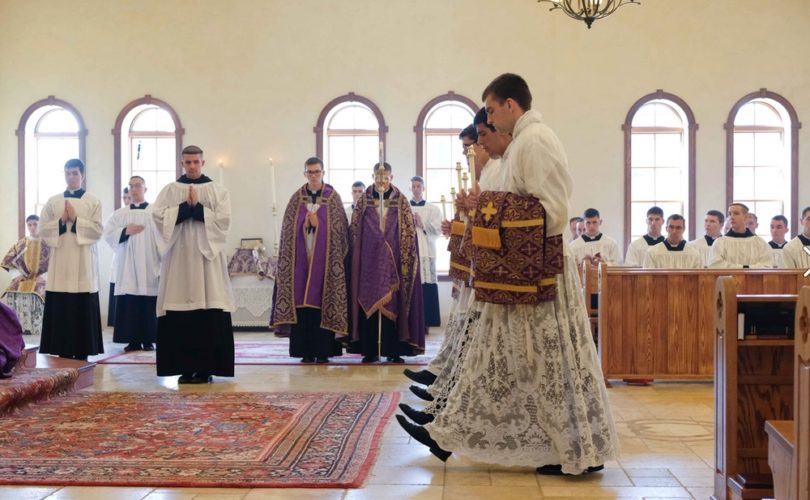 July 21, 2021 (LifeSiteNews) – As the long-term fallout from Pope Francis’s motu proprio restricting the traditional liturgy of the Church, Traditionis Custodes, remains to be fully understood, priestly societies have registered their varying reactions to the document, as the future of such traditional groups remains in the “anti-traditional” hands of the Congregation for Institutes of Consecrated Life and Societies for Apostolic Life.

Traditionis Custodes was promulgated and came into effect July 16, 2021, ushering in a new era in the Catholic Church for the clergy and members of the faithful devoted to the traditional liturgy (also called the Latin Mass, Traditional Latin Mass, Extraordinary Form, Old Rite, or Mass of the Ages). It stipulates that priests are to “request” permission from their diocesan bishops to say the traditional Mass, and consequently bishops can essentially forbid priests from saying the Latin Mass. The bishops are also to decide “whether or not to retain” parishes which had been canonically erected for the offering of the traditional liturgies.

The document also says the Latin Mass is not to be offered in parish churches, but rather at other “locations.”

Such stipulations do away with the permissions of Pope Benedict XVI’s 2007 Summorum pontificum, which afforded priests the right to celebrate Mass in the traditional rites, without needing the express authorization of the bishop or the Holy See.

As for the traditional orders offering the Mass and sacraments according to the 1962 Missal under the Pontifical Commission Ecclesia Dei, such as the Fraternity of St. Peter (FSSP), the Institute of Christ the King Soverign Priest (ICKSP), and the Institute of the Good Shepherd (IBP), Pope Francis has now moved them to the care of the Congregation for Divine Worship and the Discipline of the Sacraments (CDW), and the Congregation for Institutes of Consecrated Life and Societies for Apostolic Life.

The CDW is led by the recently appointed Archbishop Arthur Roche, who is known as a firm opponent of the Latin Mass. Meanwhile the Congregation for Institutes of Consecrated Life and Societies for Apostolic Life has been recently described by theologian and liturgy expert Dr. Peter Kwasniewski as “notoriously anti-traditional,” and is led by Cardinal João Bráz de Aviz.

— Article continues below Petition —
SIGN: Show Pope Francis the Latin Mass will survive any suppression
Show Petition Text
36715 have signed the petition.
Let's get to 40000!
Thank you for signing this petition!
Add your signature:
Show Petition Text

In light of the motu proprio, and with the potential impact as yet not fully clear, the FSSP, as well as the Priestly Society of St. Pius X (SSPX), have responded to the document with separate statements, although the SSPX’s is not an official statement from the group’s superior general. The SSPX merely published an article offering “initial thoughts” on the motu proprio via its official news service, FSSPX.news.

The other two major traditional groups, the ICKSP and the Institute of the Good Shepherd, have not issued official responses to the motu proprio as yet.

Fraternity of St. Peter does not recognize itself ‘in the criticisms made’

On the day of the motu proprio’s promulgation, the FSSP released a brief missive, describing the document as a “Cross” and a “means of our sanctification.” The group, founded as a clerical Society of Apostolic Life of Pontifical Right in 1988, added that it remained “committed to serving the faithful attending our apostolates in accordance with our Constitutions and charism as we have done since our founding.”

However, on July 20, an updated message was released from the FSSP’s headquarters in Fribourg, Switzerland, expressing how the Fraternity received Traditionis Custodes with “surprise.”

The FSSP noted it has “always professed its adherence to the entire Magisterium of the Church and its fidelity to the Roman Pontiff and the successors of the Apostles, exercising its ministry under the responsibility of the diocesan bishops.” Such a line could be viewed as a response to the Pope’s accompanying letter to the motu proprio, in which he decried “the instrumental use of Missale Romanum of 1962” which he said “is often characterized by a rejection not only of the liturgical reform, but of the Vatican Council II itself, claiming, with unfounded and unsustainable assertions, that it betrayed the Tradition and the ‘true Church’.”

The FSSP said it was “deeply saddened” to hear of the underlying reasons behind the Pope’s restrictions on the traditional Mass, and that the FSSP “in no way recognizes itself in the criticisms made.”

Furthermore, the FSSP mentioned the surprising nature of the absence from the motu proprio of the “the many fruits visible in the apostolates” celebrating the traditional liturgy, and the “joy of the faithful in being able to benefit from this liturgical form.”

“Many people have discovered or returned to the Faith thanks to this liturgy,” stated the Fraternity. “How can we fail to notice, moreover, that the communities of the faithful attached to it are often young and flourishing, and that many Christian households, priests or religious vocations have come from it?”

The Fraternity wrote that it was faced with a two-fold aspect, whereby it wished to reaffirm its “unwavering fidelity to the successor of Peter on the one hand,” while also remaining “faithful to our Constitutions and charism, continuing to serve the faithful as we have done since our foundation.”

The statement expressed the hope for a continued collaboration with and understanding from the bishops of the Catholic Church.

SSPX: TLM has gone from an animal sanctuary to the zoo, where it’s targeted for extinction

The Society has yet to issue its own official statement in response to the motu proprio, but has published an article giving its “initial thoughts” on the document. Pope Francis’ document “illustrates the precariousness of the current magisterium,” wrote the SSPX.

Nor was the Society sparing in its summary of Traditionis Custodes: “Everything, or just about everything in Summorum pontificum, is scattered, abandoned, or destroyed.”

The article contrasted the Pope’s defense of ecological issues, such as “an endangered animal or plant species,” while he also “promulgates the extinction of those who are attached to the immemorial rite of the Holy Mass.”

“While Francis defends an endangered animal or plant species, he decides and promulgates the extinction of those who are attached to the immemorial rite of the Holy Mass,” the SSPX wrote.

Paraphrasing the Pope’s attitude to the Latin Mass, the SSPX wrote: “This species no longer has the right to live: it must disappear. And all means will be used to achieve this result.”

The Society’s tone is far more free than that of the Fraternity, describing how the traditional liturgy has been relegated from a “reservation” or sanctuary-style system under Summorum Pontificum to a “zoo regime,” where such ancient liturgical celebrations are in “cages, narrowly circumscribed and demarcated.” The zoo keepers of these Masses, or “jailers,” are “none other than the bishops themselves.”

Each aspect of the motu proprio is broken down and analyzed in detail, availing of zoological terminology.

Describing Article 3, §6 of the motu proprio, which prohibits diocesan bishops from allowing new traditional groups to spring up, the SSPX writes: “This measure is akin to sterilization: it is forbidden to reproduce and perpetuate these savages of the past who must disappear.”

As for the permission now required for priests to say the Latin Mass, the SSPX states “if it is a question of restraining, reducing, or even destroying groups, the bishops have carte blanche, but if it there is a need to grant authorization, the pope does not trust them: it is necessary to go through Rome.”

Vatican II is compared to a vaccine used to inoculate the faithful against the Latin Mass, which the SSPX paraphrased as being a “virus”: “Carried away by his enthusiasm, the pope almost comes to the point of saying that it is the Old Mass which is a dangerous virus that must be defended against.”

Pope Francis’s accompanying letter has been described by some online as being “worse than [Traditionis Custodes] itself.” Referring to this letter and the motu proprio, the SSPX summarizes that the two documents give “impression of sectarianism coupled with an overt abuse of power.”

The article echoed the words of Dr. Kwasniewski, describing the motu proprio as being without “legitimacy,” and “not a law of the Church,” since “a law against the common good is no valid law.”

“The fact remains that this motu proprio, which will sooner or later end in the oblivion of the history of the Church, is not good news in itself,” closes the Society’s article. “It marks an abrupt end in the reappropriation of its Tradition by the Church, and it will delay the end of the crisis which has already been going on for more than sixty years.”