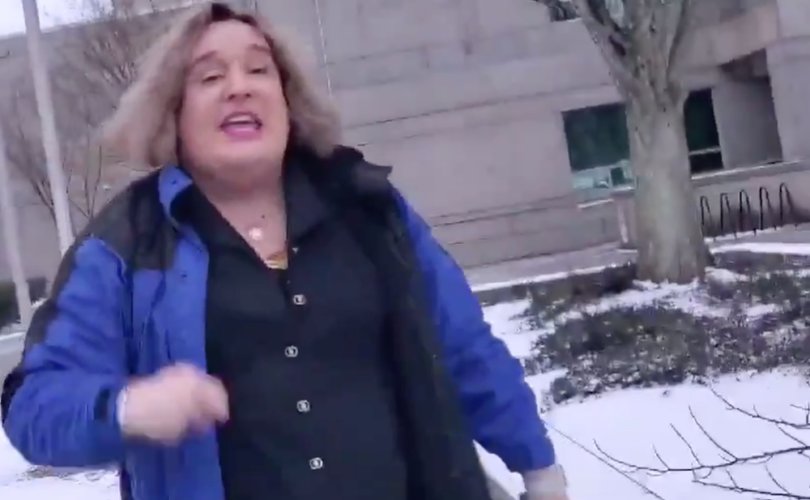 Judge Jay Solomon of the British Columbia Provincial Court also ordered a pre-sentencing report that will include a psychological report, the Post Millennial reported.

A 32-year-old male who claims to be a woman and describes himself as a “proud lesbian,” Yaniv is internationally notorious for filing more than 16 human rights complaints against Vancouver-area estheticians for refusing to wax his genitals, as well as for widely disseminated online social media messages that reveal his disturbing interest in young girls.

With this guilty plea, Yaniv now has a criminal record and could be sentenced to up to six months in jail or fined up to $5,000, or both.

Langley RCMP charged Yaniv in December with two counts of possessing an illegal weapon in connection with an August 5 incident in which Yaniv was seen brandishing and appeared to fire off a Taser during a heated livestreamed debate with American conservative transgender “woman” and activist Blair White.

In response to numerous complaints, RCMP arrested Yaniv at his Walnut Grove home that evening and detained him overnight. They searched his residence the next day and found two stun guns, pepper spray, and bear spray, the Post Millennial reported at that time.

Yaniv is also being civilly sued by reporters Keean Bexte and David Menzies of Rebel News for allegedly assaulting both men on separate occasions. The Surrey RCMP is investigating Yaniv’s alleged assault of Bexte.

In an incident Bexte recorded outside the Surrey courthouse January 13, Yaniv is seen aggressively approaching the retreating Rebel reporter, shouting, “Get away from me!” before allegedly clouting Bexte in the back of the head.

Menzies, co-plaintiff in the civil suit, alleges that Yaniv attacked him with a cane outside Yaniv’s condo last August, an incident he recorded.

Meanwhile, Amy Eileen Hamm, a reporter for the Post Millennial, is suing Yaniv for defamation after the trans activist claimed that Hamm sexually assaulted him in a ladies’ room at the Surrey courthouse January 13.

Despite this, Yaniv continues to go on the offensive, now targeting Kari Simpson of CultureGuard, a parents’ rights group fighting the Sexual Orientation and Gender Identity (SOGI) program in schools.

Trying to get Kari kicked out. Yaniv is threatening to sue. Says to Kari “You’re not allowed to be here, bitch!”

I am proceeding with a lawsuit against Kari Simpson of @CultureGuard for a few things that are going to change the landscape of the #LGBTQ in BC regarding to stopping hatred against transgender individuals. We need to put an end to gender-based harassment. https://t.co/hhmb3JBbCT

Yaniv also filed two new human rights complaints in October against estheticians for refusing to wax his legs. The B.C. Human Rights Tribunal has deferred these complaints because Yaniv hasn’t yet paid the $6,000 in costs to three salons he accused of discrimination in complaints the tribunal heard and dismissed in 2019, reported by the Justice Center for Constitutional Freedoms.

Yaniv filed a discrimination complaint in July against Christian activist Bill Whatcott. He is seeking $35,000 in damages after Whatcott publicly referred to him in sidewalk preaching and a flyer as a “biological male” and a “transvestite deviant” looking to “prey on vulnerable biological women.”

Yaniv further tweeted in January that he is “not allowing” U.K. comedian Ricky Gervais, who has mercilessly skewered Yaniv in the past, to perform in Vancouver this summer.

His critics have accused him of an untoward interest in underage girls. In July 2018, he requested permission from the City of Langley, B.C. for “LGBTQ2S+ organizations” to host a topless ‘All-Bodies Swim’ at its municipal pools “for people aged 12+.” Parents and “caretakers” were barred from admittance.

Yaniv is also alleged to have contacted underage girls online, and screenshots of his comments about whether he would see nude girls in women’s change rooms and about menstruation in 10- to 12-year-old girls have circulated on the internet.