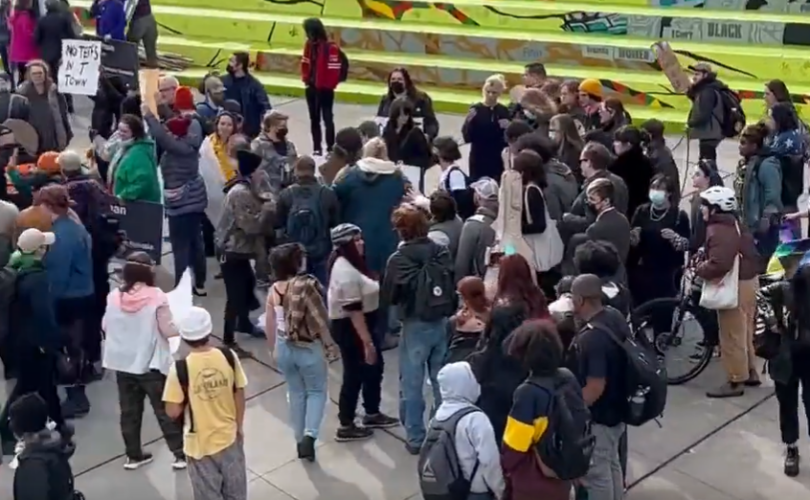 There was a confrontation at the 'Let Women Speak' rally in Tacoma, Washington.Twitter

(LifeSiteNews) — A women’s rally was shut down after pro-transgender activists repeatedly interrupted the event, attacking and injuring at least one participant.

The “Let Women Speak” rally was held October 26 in Tacoma, Washington. Kelly-Jay Keen-Minshull, a women’s activist in the U.K., hosted the event with the purpose of reclaiming women’s voices from the transgender and gender ideology movement.

“Women are being silenced through tech, so we’re taking our voices back to the public square,” Keen-Minshull told Fox News in an interview. “Many of those women [who attended] lost their jobs, they lost their livelihoods, they might have lost their children to this pernicious cult of transgenderism, and they just want to talk about it.”

However, the event was met with hostility from those with opposing views. Participants moved to another part of the location because of the noise created by trans activists, and then ended the event following multiple acts of violence.

According to the women’s rights activist, one of the participants “got her fingers crushed by a man’s bare hands. He literally got her hand in his and crushed it and broke her fingers.” A video posted on Twitter by Andy Ngo shows two young men target a woman in a crowd. They both ran away when the victim screamed and others came to her aid.

As women’s rights activists were dispersing the @StandingforXX rally in Tacoma, WA on Oct. 26, far-left pro-#trans protesters surrounded & assaulted a middle-aged lesbian caught in the middle. She had an arm injury that required treatment. The male assailants escaped on foot. pic.twitter.com/bZF2aNyjN7

One counter-protestor approached from behind and was intercepted before attacking the speaker.

“If there are any police here, there’s a man in a yellow hat who says he’s going to f*** kill someone,” Keen-Minshull says in a video obtained by the Post Millennial. During her closing remarks, she also asked supporters to donate to the “Let Women Speak” campaign in order to provide security measures at future events.

“After an assault, threat to kill, and the police refusing to attend, the only option was to end the event,” Keen-Minshull posted on Twitter.

After an assault, threat to kiII and the police @TacomaPD refusing to attend, the only option was to end the event.

According to a statement from the Tacoma Police Department to the Daily Wire, local law enforcement “had officers on scene monitoring the event. Police responded to calls from victims wanting to report a crime. This included a victim who reported an assault and damage to a cell phone. An arrest was made of a 27-year-old male, and the suspect was booked into jail.”

During her interview with Fox News, Keen-Minshull described gender ideology and transgenderism as a “dishonest narrative that anybody can choose their biological sex.”

“I don’t know how much worse it can get; you’ve got male rapists in women’s prisons,” she said when asked where she expected the movement to lead in the future. “I think people across the country have got to wake up pretty damn quick, join their school boards, and start talking about this to anybody and everybody as much as humanly possible to try and stop it.”

“The broken bodies of children cannot be repaired once they start on this journey of puberty blockers, cross sex hormones and surgeries.”

“I’m far more afraid of the things that are happening than the consequences to me personally,” she added. “Staying silent is really not an option anymore. I would be much more afraid of doing that.”

Previously, Keen-Minshull has publicly opposed gender ideology within her fight for women’s rights. In March, she confronted transgender journalist Don Ennis at an event in Georgia, asking him not to use women’s restrooms and locker rooms.

The activist is currently hosting a “Let Women Speak” tour across the United States to protest the transgender movement’s attack on women. The next rally will take place in Miami on November 5.