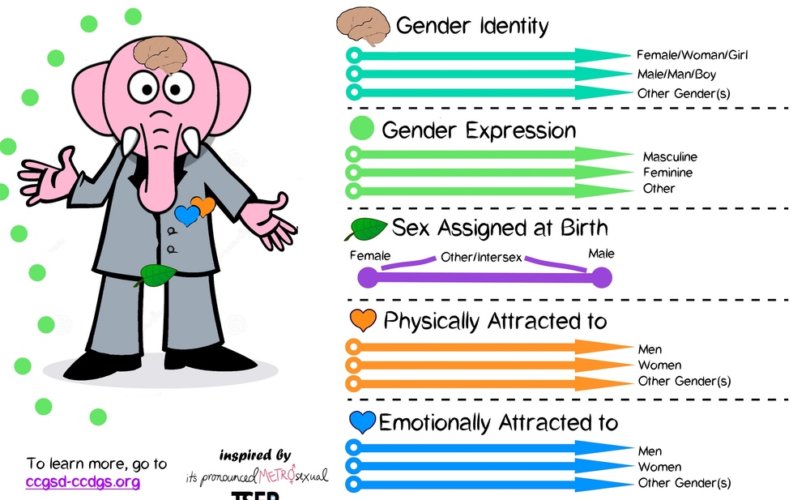 OTTAWA, Ontario, May 17, 2018 (LifeSiteNews) – A Canadian LGBT activist group is replacing a character meant to illustrate the “spectrum” of human gender and sexuality, demonstrating how the transgender lobby is steadily replacing objective facts with personal perception.

The “Gender Unicorn,” a graphic designed by Trans Student Educational Resources, is an illustration of a cartoon unicorn diagramming what the group claims are five distinct aspects of sexuality: gender identity, gender expression, “sex assigned at birth” (which they say can be female, male, or “Other/Intersex”), physical attraction, and emotional attraction.

In fact, “sex assigned at birth” is a misnomer for biological sex, as identifying a newborn’s sex merely recognizes what is rooted in an individual’s chromosomes and reflected in hundreds of genetic characteristics. Actual cases of hermaphroditism, in which people are born with ambiguous genitalia or their apparent sex doesn’t match their chromosomes, are extremely rare and a different issue from gender confusion.

Even so, the Canadian Center for Gender and Sexual Diversity (CCGSD) has decided the potential combinations of the “Gender Unicorn” weren’t diverse enough, so they released their own spin on the concept: the “Gender Elephant.”

Similar to the unicorn graphic, CCGSD’s elephant has most of the same categories, with one key difference: the “Sex Assigned at Birth” category changes “Other/Intersex” from a third distinct option to a line connecting male and female, along which people can supposedly fall at any point.

The group claims the old categories were “socially constructed,” whereas the new line “shows sex assigned at birth as the spectrum that it really is.”

“When it comes to biology, variation and diversity is the norm – not the exception,” CCGSD claims. “[We] like to remind people that just like how all of our faces are unique, so is our biological makeup. Also, classifying those who do not neatly fit into the boxes of ‘male’ or ‘female’ as ‘other’ implies that all intersex folks are the same – which is a huge overstatement. Intersex is an umbrella term for anyone with a very wide range of characteristics and life experiences.”

The premise that “gender identity” and biological sex are distinct and unrelated is hotly disputed, with the World Health Organization and American Psychological Association still classifying gender dysphoria as a mental disorder (though the former is expected to cede to political pressure and drop that label sometime this year).

But this latest change suggests that the transgender lobby is no longer content to argue that perceived identity trumps biology, and now seeks to redefine or deny biology itself.

Further indicating that this was CCGSD’s intention is the fact that the Gender Elephant replaces the transgender lobby's old symbol for assigned sex, a DNA strand inadvertently recognizing sex’s scientific basis, with a leaf between the character’s legs.

In March, psychology professor and pundit Dr. Jordan Peterson took aim at the Gender Unicorn and its predecessor, the “Genderbread Person,” particularly their use to indoctrinate schoolchildren as young as Grade 7 with “a particular kind of philosophy of identity.”

“So one of the other things that’s very dangerous about what’s happening currently, I believe, is the all-out assault on gender identity as such, so the law now basically states that gender identity is something that is only determined subjectively,” Peterson warned.

The vast majority of children displaying gender confusion outgrow it on their own, and various studies and health experts warn that reinforcing a patient’s belief that they are the wrong gender rather than treating the underlying causes of their confusion can lead to a variety of mental health problems, including self-harm and even suicide.