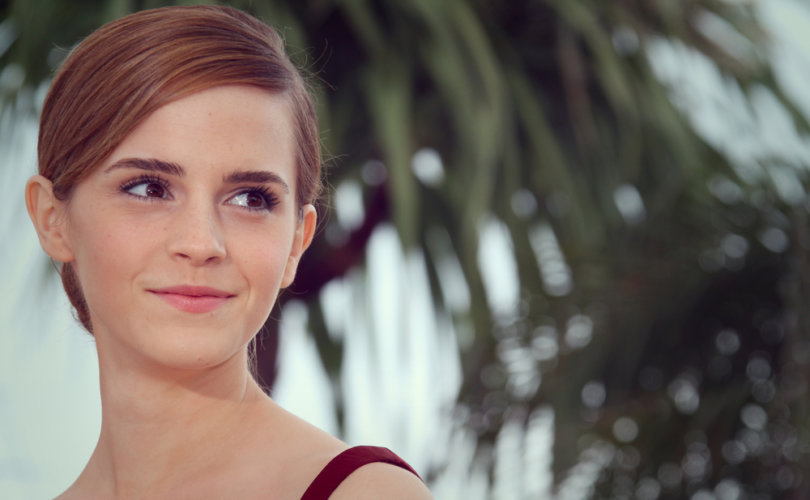 LOS ANGELES, California, May 8, 2017 (LifeSiteNews) – Actress Emma Watson received what’s being called the first genderless acting award over the weekend for her role in Disney’s recent Beauty and the Beast remake.

The non-gender specific “Best Actor in a Movie” was the first award Sunday night at the MTV Movie and TV Awards. Actor Asia Kate Dillon, the first “gender-neutral nonbinary performer” to be cast in a major TV series, presented it to Watson.

“It’s so cool to be here presenting the first acting award ever that celebrates performance free of any gender distinctions,” Dillon said before introducing Watson.

Dillon plays the Taylor Mason character in the Showtime series Billions. After the actor questioned best actor and actress categories for Emmy submissions to the Academy of Television Arts & Sciences earlier this spring, MTV opted to distribute non-gendered awards.

“The fact that MTV has the first non-gendered acting award in history is a victory, especially at a time when we’ve seen so many losses,” Dillon told the New York Daily News.

“It was important that ‘actress’ was entered into the award system binary when it was,” Dillon continued, “because that was the change that needed to happen then, but I think ultimately separate is not equal.”

Dillon was identified as “she” in the Daily News report. The actor is being referenced as the gender-neutral “they” in other reports.

Dillon continued, “And you know, ‘actress’ is a band-aid for a wound, and I’m excited to be a part of the uncovering of the wound, so we actually get to talk about why women and people of color and gender nonconforming people have been historically underrepresented in film and television. That’s the conversation we really need to be having.”

Watson told the audience the award was very meaningful. Then, regarding Dillon, she said, “Both to be winning the award, and to be receiving it from you, Asia. Thank you for educating me in such an inclusive, patient, and loving way.”

Watson opened her acceptance speech by saying the first acting award to not separate nominees based upon gender “says something about how we perceive the human experience.”

“MTV’s move to create a genderless award for acting will mean something different to everyone,” she said. “But to me it indicates that acting is about the ability to out yourself in someone else’s shoes, and that doesn’t need to be separated into two different categories. Empathy and the ability to use your imagination should have no limits.”

“I’m so proud to be part of a film that celebrate diversity, literacy, inclusion, joy and love the way that this one does,” said Watson.

The Beauty and the Beast remake made headlines just before its release after director Bill Condon’s revealed the film would include a gay subplot. There was some backlash from Christian and family groups, as well as among some countries overseas, for Disney’s use of a fairy tale previously understood to be family friendly as a vehicle for normalizing homosexuality.

The month before its release, Watson, a professed feminist, was filmed in a video for the Vanity Fair publication in which she praised the nation’s largest abortion chain.

Watson was offering advice remotely in the video to commuters in New York’s Grand Central Station. The proceeds from her advice booth went to the abortion giant.

The actress who gained fame in the Harry Potter film series received MTV’s Trailblazer award in 2013.