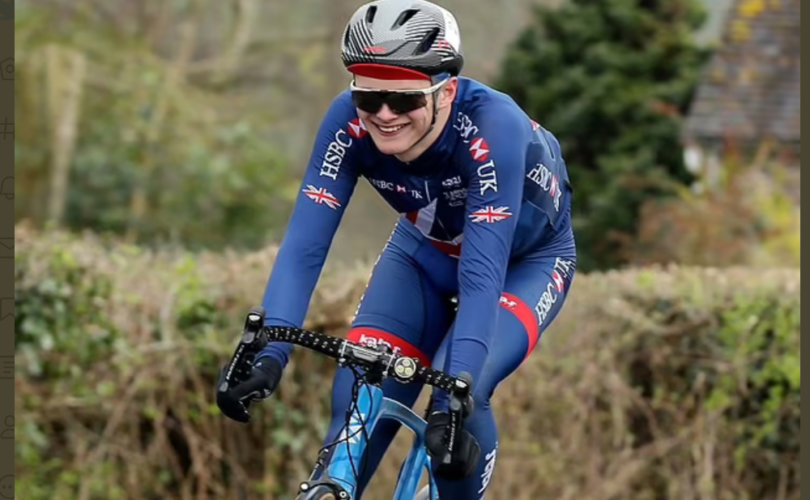 DERBY, U.K. (LifeSiteNews) — Following much controversy and protest from female athletes, transgender cyclist Zach “Emily” Bridges has been banned by cycling’s international governing body from competing in a national event in the U.K. this weekend.

The Union Cycliste Internationale (UCI) announced March 29 that Zach Bridges is not eligible to compete in the women’s events at the national Omnium championships this weekend, due to a technical regulation.

21-year-old man Zach Bridges, now known as “Emily” Bridges, announced that he is “transgender” in an October 2020 article for SkySports, released on the so-called “coming out” day of that year, and began hormone therapy in 2021. Since then he has competed against men while continuously lowering his testosterone levels in order to compete against women.

Under recently updated regulations from British Cycling, cycling’s governing body in England, Bridges was due to compete against women for the first time this weekend. Taking to the track in Derby for the national Omnium Championships April 2, Bridges would have faced some of the female stars of British Cycling, including the country’s most successful female Olympian Dame Laura Kenny.

Bridges won the male points race at the British Universities’ track cycling championships in Glasgow, February 27, his most recent men’s race. Media reports noted how as recently as March 29, Bridges was still listed as a man on British Cycling’s rider list.

But in a statement released on March 29, British Cycling announced that the UCI had forbidden Bridges from competing in the women’s events in Derby, due to a technical regulation. “We have now been informed by the Union Cycliste Internationale (UCI) that under their current guidelines Emily is not eligible to participate in this event,” stated British Cycling.

Under the UCI’s regulations, Bridges is still listed as a man, and hence cannot compete as a woman until the UCI regulations expire. The BBC further noted that the UCI stipulated that Bridges had to be approved to race as a female at international events, before being allowed to race at national events.

“Transgender and non-binary inclusion is bigger than one race and one athlete — it is a challenge for all elite sports,” stated British Cycling. “We acknowledge the decision of the UCI with regards to Emily’s participation, however we fully recognise her disappointment with today’s decision.”

British Cycling added it was “calling for a coalition to share, learn and understand more about how we can achieve fairness in a way that maintains the dignity and respect of all athletes.”

While Bridges was talking up his possibility of riding in the 2024 Olympics as a female rider, he faced significant protest from female British athletes. Professional 800 meter runner Ellie Baker called his scheduled participation in the Omnium Championship “ridiculous … totally unfair.”

How this has been allowed to happen is just ridiculous. I would refuse to race and hope that the other women would stand with me on this too. This is totally unfair. The advantages a trans women has had from going through puberty as a boy to a man can never been undone. https://t.co/2ALBTXozx8

Baker was supported by a number of female athletes, including former Olympic swimmer Sharron Davies MBE, who said, “I can’t see how this isn’t sexual discrimination in the tallest order. Reducing testosterone does not mitigate male puberty advantage.”

Well said Ellie👏 us females passed and present should stand together on us. https://t.co/QXUqjZ8XkN

“This is wrong and people must start calling it out or lose sport for future generations of young girls,” added Davies.

Indeed reports have surfaced that female cyclists were planning to boycott the event in protest over Bridges’ participation, although female cyclists have reportedly been too scared to speak out publicly. Notably, while a number of female runners have spoken out against Bridges, such concerns have been publicly absent from the high-ranking female cyclists in the U.K.

According to the Daily Mail, a “well-placed source” in British Cycling claimed “everyone is afraid to say anything for fear of retribution.”

History of success as male rider

Bridges had previously been on British Cycling’s prestigious development program, and moved to its senior squad with an eye on competing at the 2024 Olympics. Bridges has enjoyed notable success in the under-23 male category, achieving the British male junior 25-mile record of just under 47.5 minutes.

In contrast, the quickest junior female time in the same year was 52 minutes and 54 seconds, almost 5.5 minutes slower. Indeed, the adult women’s record stands at just under 49.5 minutes, still two minutes slower than the national record Bridges set as a 17-year-old junior.

Bridges currently rides for an LGBT specific cycling team, “ALL IN racing,” as he continues his bid to make the female British Cycling squad for the 2024 Olympic Games.