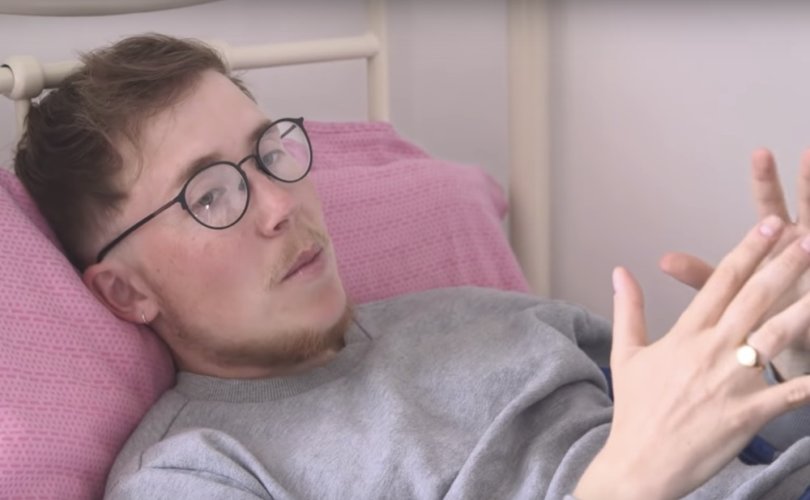 UNITED KINGDOM, July 19, 2019 (LifeSiteNews) – A woman “identifying” as a man has given birth to a son, and is now fighting to be recognized on the boy’s birth certificate as “father” rather than the mother.

32-year-old Freddy McConnell is a Guardian multimedia journalist and subject of the documentary Seahorse, who says she experienced gender dysphoria since childhood, according to a Guardian profile. She began taking testosterone at 25, and had breast tissue removed at 26. She opted against a hysterectomy, however, as she was still considering having children.

“I’ve always loved kids. Before I transitioned, I considered becoming pregnant – because I’d been told transitioning would make me infertile,” she said, but ultimately decided to transition first, then impregnate herself via artificial insemination. “I thought, ‘I need to transition for my own mental health, so to become a parent now would not be a good idea.’ I needed to figure out exactly who I was before I had a kid.”

McConnell was legally registered as male at the time, but was told she can only be recognized as “mother” on the birth certificate, Sky News reports, so she’s suing the General Register in hopes of changing the law.

This week she lost a bid to prevent journalists from naming her in reporting on his case, with judge Sir Andrew McFarlane ruling that her participation in the documentary undermined her privacy claims. “The degree to which his privacy will be compromised by revealing this additional information” is “not great,” McFarlane said.

“Now that my anonymity has been lifted, I embrace the opportunity to draw focus on the need for equality in this area of the law,” McConnell declared. “All children should be able to have their legal parents correctly and accurately recorded on their birth certificates.”

“Having an accurate birth certificate is vital as it stays with someone for their entire life and forms part of their identity,” McConnell’s attorney Karen Holden told the Guardian. “We took on this case to support changing a part of UK law that denies equality, creates inaccurate documentation and fails to serve multiple groups with the LGBTQ+ community.”

Despite her lawyer’s claim that the case is a bid for accuracy, sex is rooted in an individual’s chromosomes and reflected by hundreds of genetic characteristics. The American Psychiatric Association still classifies gender dysphoria as a mental disorder; studies indicate that more than 80% of children experiencing gender dysphoria outgrow it on their own by late adolescence, unless their confusion is reinforced by adults. Full sex “reassignment” surgery often fails to resolve gender-confused individuals’ heightened tendency to engage in self-harm.