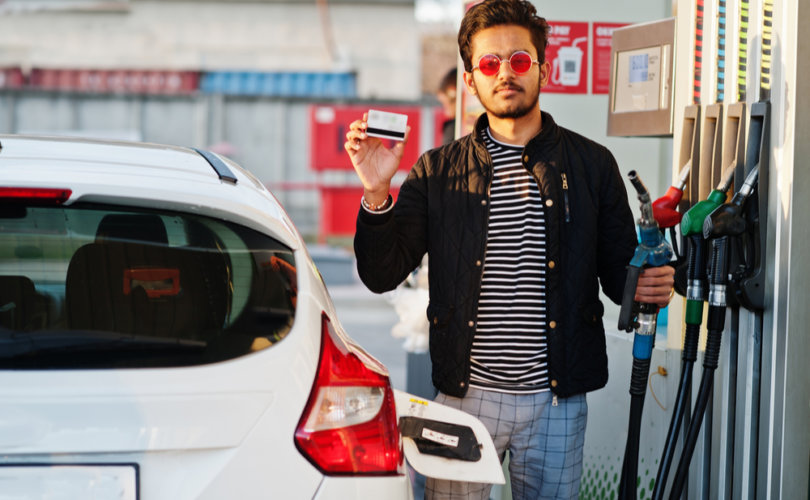 (LifeSiteNews) — The company that created a credit card to track your purchases’ CO2 emissions is set to launch a “premium” version of the card that cuts off your spending as soon as you hit your “carbon max.”

This is the latest of many schemes to force major changes in human behaviour to allegedly lessen global warming. Social scientist and author Steven Mosher has called the global warming movement a “giant propaganda effort” and “the biggest scientific fraud ever perpetrated on the family of man.”

Doconomy has partnered with Mastercard and the United Nations Framework Convention on Climate Change (UNFCCC) to create technology for the everyday consumer that “connects the purchase price of a product with the effect on the planet measured in Kg CO2, and then recommends the amount to offset – practically putting a price on carbon,” as the Doconomy website explains.

The DO credit card works hand-in-hand with a phone app, launched in April 2019, that quantifies the CO₂ emissions generated from each credit card transaction. The website introduces the card with video footage of whitewashed, typical consumer goods floating, like trash, as if through space, each labeled with a carbon emissions number.

The back of the card reads underneath the signature authorization area, “I’m taking responsibility for every transaction I make to help protect our planet.”

Doconomy will soon release a “premium” version of the credit card, called DO Black, touting it as “the first credit card ever to stop you from overspending.”

Measured against the UN goal of cutting carbon emissions in half by 2030, DO Black “comes with a monthly tCO2e limit, ensuring that we stick to the UN-2030-recommended cuts in carbon,” the website reads.

“Instead of introducing a premium credit card with benefits that typically encourages further consumption, Do Black only has one essential feature – a carbon limit. The core purpose is the ability, not only to measure the impact of your consumption, but also to bring it to a direct halt,” the company stated.

The website currently features a sneak peek of the message the card user will be met with as soon as they hit their carbon max, complete with a red exclamation point warning: “Transaction denied! Carbon limit reached.”

Nathalie Green, the CEO and co-founder of Doconomy, views the card as a critical need: “We all need to come to terms with the urgency of the situation and rapidly move towards more responsible consumption. With Do Black there is no more excuses. Through our collaboration with UNFCCC and Mastercard, Do will enable people to do their part to contribute to the carbon reduction goals of 2030 and onwards,” she

The company revealed that they have partnered with the UN to participate in five “carbon dioxide reducing efforts,” or CO2 “offset” projects. Doconomy’s “climate smart savings account” also currently has a half-percent interest rate where “0.4 goes to our economy and 0.1 goes to the planet,” as “compensation” for the carbon impact.

As a company, Doconomy doesn’t limit itself to the creation of the DO credit cards but provides tools, using their “Åland Index,” to help other financial service providers and companies assess the “climate impact” of digital financial transactions, particular products, and even entire personal “lifestyles.”

Their goal is ambitious: “bring about structural change by rewiring the financial system,” as their website reads. Their services are already being used by the bank Klarna, which is providing “carbon impact calculations on all transactions by all users” through Doconomy’s Åland Index. This is being described as “the largest initiative ever taken by a bank in educating its users on the impact of consumption.”

While the card is currently being advertised for voluntary use, Marc Morano, founder and executive editor of what leftists call the “climate change denial” website Climate Depot, has predicted that this voluntary phase will have its own expiration date:

“This CO2 monitoring credit card will begin as a ‘voluntary’ measure with no ‘mandate.’ But how long until this CO2 card will be mandated by big corporations in collusion with governments? Given how the climate activists are aping the COVID lockdowns, expect this credit card to be mandatory under a ‘climate emergency.'”

Morano has noted that the DO card “follows on the heels” of an August 2021 Nature study “calling for ‘carbon allowances’ that would monitor individuals’ CO2 emissions through smart meters and tracking apps.”

He warned readers, “Get ready for a Chinese-style social credit system scoring when it comes to your personal spending habits.”

In response to a college professor’s “radical” proposal, shared by NPR, that people need to have fewer children because of the “prospect of climate catastrophe,” and that we need to decentivize procreation with a “carbon tax” on children in wealthy nations,   Morano commented:

“U.S. environmentalists are taking a page from China’s mandatory one-child policy even as China abandons the policy. If these wacky climate activists believed their own literature they would realize that ‘global warming’ may lead to less kids!”

Steven Mosher agrees that the ultimate goal of global warmists is to dramatically decrease the world’s population. “They cheered China’s one-child policy from the very beginning,” he noted.

Jack Hellner, writing for the American Thinker, has noted that news outlets have been fear mongering about a climate crisis for decades — even a century — only to have their predictions fall flat, time and again.

Despite their use of fraudulent claims by climate change alarmists, such as that walruses shown in a documentary were throwing themselves off a cliff “because of climate change,”  the World Economic Forum (WEF) has seized upon the climate change narrative to help drive its Great Reset agenda.

The WEF’s virtual Davos summit of 2021, for example, has framed climate change as an “urgent threat demanding decisive action,” including “comprehensive,” short and long-term “climate actions in line with the goals of the Paris Agreement” by both private and public bodies. These goals include “greener” (even if less profitable) business practices with lower CO2 emissions, to be enforced by international authorities.

Such practices are already being pushed in the name of the so-called “climate emergency” by public officials like Justin Trudeau, whose Liberal Party’s “climate plan” would introduce more carbon taxes and target Canada’s oil and gas sector, such as by banning the sale of new gas-powered vehicles from 2035 onward.