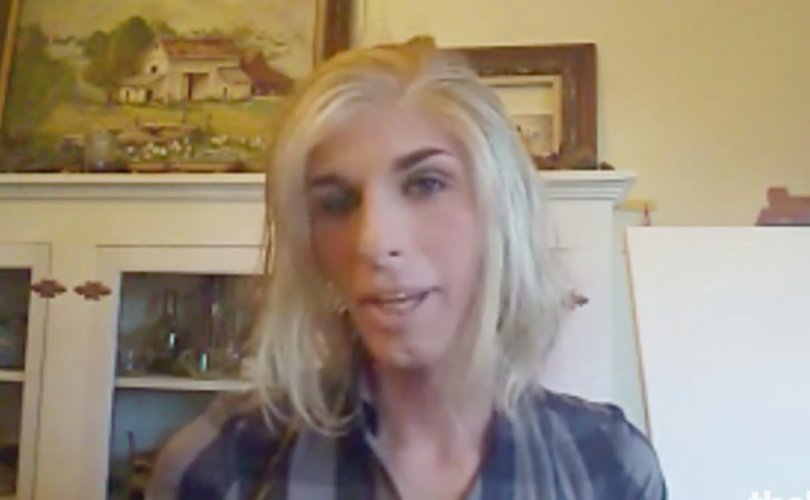 Edie Dixon, a biological male who identifies as a 'transwoman'

July 28, 2017 (LifeSiteNews) — A biological male who identifies as a “transwoman” said he supports President Trump's decision to ban “transgender” individuals from serving in the Armed Forces.

Edie Dixon said he is “very satisfied” with the decision because trans individuals have no more “right” to join the military than any other “medically reliant” group of people.

The slender male with bright blond hair hanging to his shoulders was recently profiled by Women in the World. He related how he (identifying as “she”) was ostracized at a Portland LGBT “Pride” parade for wearing a “Make America Great Again” cap in support of Donald Trump.

When asked about if LGBT activists can be intolerant, Dixon, who calls himself a “devout Constitutionalist,” replied: “Now it feels like the Left has flipped flopped. It's all hypocrisy. They are not for tolerance anymore. They are against free speech….It's not [an] equal rights movement anymore. It's a political agenda movement. It's a liberal agenda movement.”

Dixon said that Trump’s new ban is part of his promise of keeping Americans safe.

Trump is doing a “great job” in keeping Americans safe, he said. “We don't need any more political correctness in this country. We need truth, and we need safety,” he added.

“Guess what? Color blindness disqualifies you from the military. … Are we… ‘discriminatory’ towards color-blind people?” he added.

“So I don't see this as being discriminatory in any way, shape or form,” he says. “There has to be a line drawn in the sand — a standard and force that cannot be crossed by any means,” he concluded.