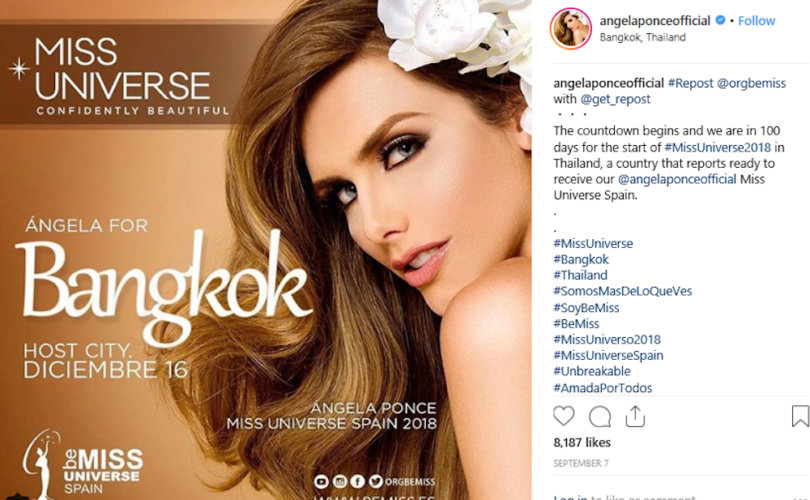 December 5, 2018 (LifeSiteNews) – Spain’s contestant in this year’s Miss Universe pageant is not a woman but a man, a “transgender” who oddsmakers now favor to win the international beauty competition.

Known as Angela Ponce, the contestant will be competing in the 2018 pageant, which will be held later this month in Bangkok, Thailand.

Ponce recently told Time Magazine that he was “crushed” in 2015 while competing in Spain’s Miss World contest.  “I found out on the day of the competition that their rules didn’t allow a transgender woman to win,” said Ponce.

“I’m competing because it’s what I’ve wanted to do since I was a little girl,” adding that he loves the evening gown portion of the pageant.

Ponce hopes to win the competition because, “If they give me the crown, it would show trans women are just as much women as cis women.”

The male contestant reportedly began hormone therapy at 16, and underwent vaginoplasty surgery at 24.

The prospect of a man winning the Miss Universe competition shows that “Political correctness has overridden the slightest commonsense,” said Gwendolyn Landolt, national vice president of REAL Women of Canada.

“That man is not a woman,” said Landolt, adding that despite having had surgery and taking hormones, “He’s still a man.”

“If he is in the Miss Universe competition and he wins,” noted Landolt, “it just goes to show the whole thing is a joke.”