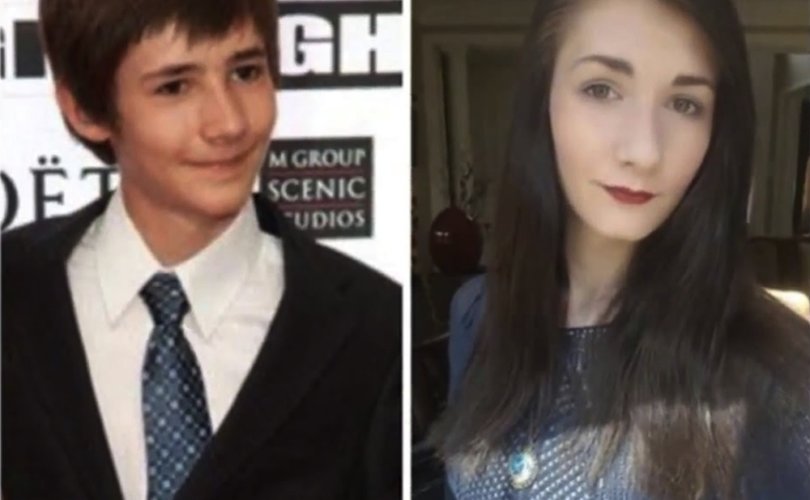 PITTSBURGH, Pennsylvania, September 21, 2016 (LifeSiteNews) — The family of famed child singer Jackie Evancho are planning to sue their school district because they have separate bathrooms for boys and girls.

They are launching the suit on behalf of Jackie's brother Jacob, who believes he is “transgender” and calls himself “Juliet.”

Gay activist group Lambda Legal of New York City announced it will sue Pine-Richland School District on behalf of the Evancho family for requiring students to use the facilities of their biological gender or a “unisex” bathroom.

The school district passed the separate-gender resolution on September 12 by a 5-4 vote.

Notes from the school board meeting detail the majority's “support to return to the long-standing practice of providing sex-specific facility usage. All students will have the choice of using either the facilities that correspond to their biological sex or unisex facilities.”

A spokesman for Lambda summarized the separate-gender resolution: “Really, what the district has said is 'We erase and ignore you. We tell you you are not who you say your are.'”

“It is common sense: boys and girls should not be forced to share locker rooms, shower areas or restrooms,” Alliance Defending Freedom Media Relations Director Bob Trent told LifeSiteNews. “There are compassionate solutions to accommodate students who are struggling with these issues that don’t violate the right to privacy of every other student in the school.”

A private “unisex” bathroom that anyone may use is not good enough, according to Jacob/“Juliet” Evancho, “because it marginalizes us. It makes us feel even more separated.”

“It’s ironic that laws created to protect women and girls are now being used against them,” Trent said.

Jacob said that after the resolution passed he has been called “queer” by other boys. He concluded that he no longer feels safe at school.

Pine-Richland School District explained to Pittsburgh television station KDKA, “When a complaint of bullying or harassment is made, an investigation is conducted at the building level. … Evidence of bullying, threats and/or harassment are not tolerated and would result in disciplinary consequences.”

The boy's mother, Lisa, noting that her son dresses and looks like a girl, rhetorically asked, “Can you imagine her going into the men’s room and using the restroom?”

She also performed for Pope Francis last year during the pontiff's visit to Philadelphia, singing “When You Wish Upon a Star,” “Can You Feel the Love Tonight,” and “Ave Maria.”