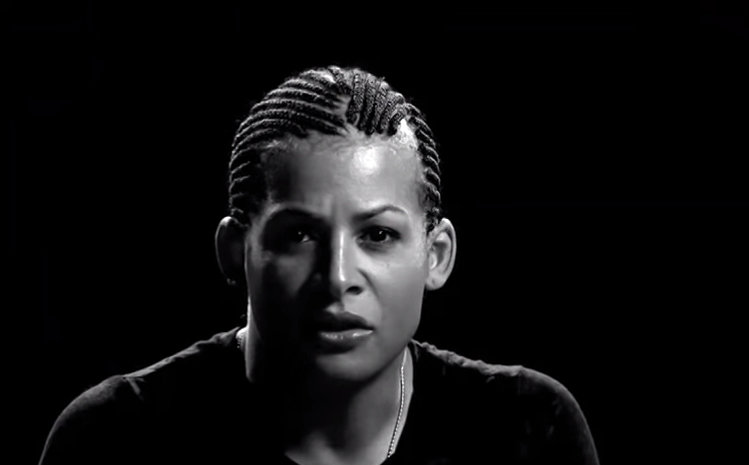 'I’ve fought a lot of women and have never felt the strength that I felt in a fight as I did that night,' said Tamikka Brents about Fallon Fox (pictured)Youtube screenshot

On Saturday, Fox defeated Tamikka Brents by TKO at 2:17 of the first round of their match. In addition to the damaged orbital bone that required seven staples, Brents received a concussion. In a post-fight interview this week, she told Whoa TV that “I've never felt so overpowered ever in my life.”

“I’ve fought a lot of women and have never felt the strength that I felt in a fight as I did that night. I can’t answer whether it’s because [he] was born a man or not, because I’m not a doctor,” she stated. “I can only say, I’ve never felt so overpowered ever in my life, and I am an abnormally strong female in my own right. ”

His “grip was different,” she added. “I could usually move around in the clinch against…females but couldn’t move at all in Fox’s clinch.”

Fox's gender controversy is not new. In March 2013, after a 39-second knockout victory, it was revealed that Fox had not told the MMA community about his sex-change operation, which took place in 2006. That bout was the fifth straight first-round victory for the then-37-year old Fox, including his three amateur bouts, and his second victory as a professional fighter.

A video of the Brents fight taken by a ringside fan shows Fox throwing several powerful knees to the face and torso of Brents at the start of the match, who pulled guard to protect herself. Soon, Brents turned her back to avoid damage, where she took approximately 45 seconds of elbow and fist strikes – many blocked by her hands and arms – before the referee stopped the fight.

Critics of Fox abound, especially in light of the Brents fight. Ultimate Fighting Championship (UFC) female champ Ronda Rousey told TMZ that while she would fight Fox, allowing transgender men to fight is “a case-by-case scenario.”

“I feel like, if you already go through puberty as a man, that's something you can't really reverse,” said Rousey, who said that it “would be fine” if a boy who was on hormone therapy to become a woman prior to puberty wanted to fight as a woman.

Because Fox had transgender surgery so late in life, however, Rousey said that he shouldn't fight women.

Likewise, last year, UFC announcer Joe Rogan made his opinion unambiguously and graphically clear, saying on his podcast that a transgendered man would “have all the bone structure that comes with” being a man. “You have bigger hands, you have bigger shoulder joints.”

Speaking to LifeSiteNews, military veteran Jeff Nader, who has fought for UFC competitor Bellator, said that “Fallon Fox has had the benefits of being a man for most of his life. [He has] bone density, muscle mass, and other physical benefits that one gets from being a man. You can't have that, and then make a minor adjustment — basically, a cosmetic adjustment — and suddenly claim to be a woman.”

“Nothing can take away from the fact that you are physically a man. Mentally and emotionally, who knows — but physically, he's a man.”

Nader said that Fox's loss to a woman earlier this year “doesn't matter.” He told LifeSiteNews that “I am 220 pounds right now, and there are some women who would beat me in a grappling match because they have better technique. But that's in grappling, which doesn't involve striking. My wife has beaten several men in regulated grappling matches, but when you involve striking, that changes the equation. The physicality involved in MMA, including brute strength, changes the equation.”

Combat sambo practitioner and former amateur boxer Brian Ledoux was likewise critical of Fox's decision to compete, saying that “I do not think a transgender male should be able to fight in female sports. I consider myself to be socially liberal on most subjects, but not when it comes to this scenario.”

“In my opinion, when it comes to something like combat sports there is a clear physical advantage a transgender male could have over a female fighter. This is coming from my basic understanding of the physiological difference between the sexes,” Ledoux said. “These advantages create an uneven playing field in a sport that is already dealing with things like PED abuse, blood doping, etc.”

“While I respect an individual’s rights to live their own life,” Ledoux told LifeSiteNews, “I think in the case of MMA and combat sports a clear line should be drawn.”

“Even if a transgender male loses some of his physical strength, that person will still likely have a tremendous strength advantage over…female opponents,” said Siggins, who in addition to fighting also formerly ran and reported for the biggest MMA website in New England and New York. “A transgender male is simply bigger and more powerful than a female, and should not, I believe, be allowed to compete in female combat sports.”

Fox has received support from some quarters, including from the first openly homosexual UFC fighter, Liz Carmouche. After Fox's surgery became public, Carmouche told the homosexual advocacy site GLAAD that “the MMA community – people who work in the gyms, the trainers and sparring partners and the fans – all openly embraced me as an athlete and I’m proud to see that also happening with a transgender athlete.”

Carmouche said, “If a world-regarded respected body like the Nevada Athletic Commission licenses her as a female competitor, and says she has no performance advantage, then that should be good enough for everyone.”

After Fox's past was revealed, Championship Fighting Alliance women’s tournament was canceled in support of Fox, who was under a great deal of pressure at the time because he had falsely claimed the California boxing commission had approved her fighting license. Fox says the misunderstanding — Fox's application was being considered in California — was accidental.

In an interview with “Inside MMA,” Fallon said that “I don’t believe that a transgender fighter should have to disclose her personal medical history to other female fighters before they fight. It’s simply for the reason the medical community and the scientific community have come to the consensus that post-operative transsexual fighters who have been on hormone-replacement therapy and testosterone suppression, when they’re going from male to female, haven’t been found to have any physiological advantages over other women.”

One fighter who did try to be aggressive was Brents. Her conclusion is that Fox shouldn't fight with women. “Any other job or career I say have a go at it, but when it comes to a combat sport I think it just isn’t fair. At least not until we have more scientific proof that it is or isn’t fair. More research is needed for sure.”