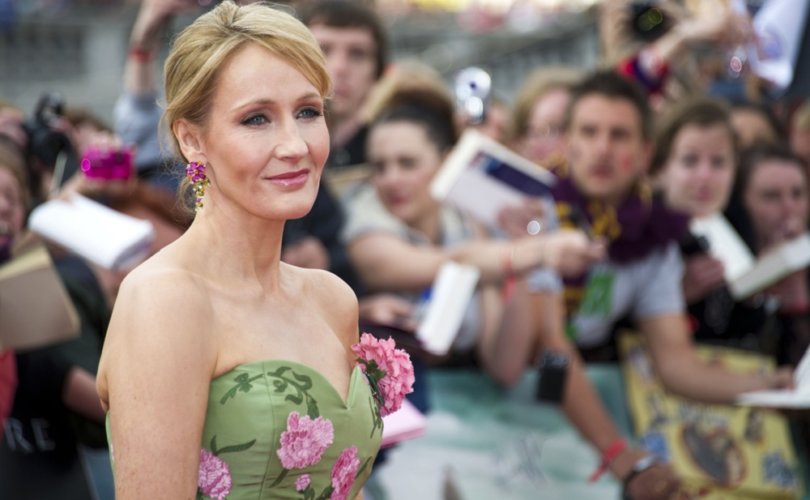 On Saturday, J.K. Rowling caused a firestorm when she mocked the headline of an article in online charity magazine Devex.com. The headline reads “Opinion: Creating a more equal post-Covid 19 world for people who menstruate.”

“I'm sure there used to be a word for those people,” Rowling, 54, wrote in what is now a viral tweet. “Someone help me out. Wumben? Wimpund? Woomud?”

Thousands of Twitter-users responded to the best-selling author’s message, many accusing her of harming transsexual people. The American Gay & Lesian Alliance Against Defamation (GLAAD) signaled there that its members “stand with trans youth, especially those Harry Potter fans hurt by [Rowling’s] inaccurate and cruel tweets.”

GLAAD added, “JK Rowling continues to align herself with an ideology which willfully distorts facts about gender identity and people who are trans. In 2020, there is no excuse for targeting trans people.”

In a subsequent Twitter stream, Rowling indicated that the ideology she aligns with is better known as reality.

“If sex isn’t real, there’s no same-sex attraction,” she wrote.

“If sex isn’t real, the lived reality of women globally is erased. I know and love trans people, but erasing the concept of sex removes the ability of many to meaningfully discuss their lives. It isn’t hate to speak the truth.”

The author asserted that she respects “every trans person’s right to live any way that feels authentic to them” but also that her own life had “been shaped by being female.”

“I do not believe it is hateful to say so,” Rowling stated.

The Devex.com article did, in fact, mention “women and girls” as well as the growing number of women and girls who identify as “gender non-binary persons.” The development magazine reported that “over 500 million women worldwide do not have what they need to manage their menstruation.” The humiliation of these women and girls is clearly of less interest to Rowling’s critics than her refusal to bow to transgender ideology.

Rowling first attracted LGBT ire when she published a tweet defending Maya Forstater, a British tax expert who lost her job after opposing the legal definition of women to include men.

Among Forstater’s tweets was her September 2, 2018 post expressing that “radically expanding the legal definition of ‘women’ so that it can include both males and females makes it a meaningless concept, and will undermine women’s rights & protections for vulnerable women & girls.”

On September 25, 2018, Forstater tweeted: “Yes I think that male people are not women. I don’t think being a woman/female is a matter of identity or womanly feelings. It is biology.”

She was fired by her then-employer, the Centre for Global Development, for her statements, and a court decided that this decision was lawful. As a response to the judgment, J.K. Rowling tweeted, “Dress however you please. Call yourself whatever you like. Sleep with any consenting adult who’ll have you. Live your best life in peace and security. But force women out of their jobs for stating that sex is real? #IStandWithMaya #ThisIsNotADrill.”

Forstater is now one of the people defending Rowling against accusations that she is hateful. In response to a suggestion to the author that nobody is saying sex isn’t real, Forstater linked to a post by transgender ACLU lawyer Chase Strangio. In it, Strangio informed media, “‘Biological sex’ is not a fixed scientific concept but an ideological one usually designed to exclude trans people from spaces.”

J.K. Rowling, who resides in Scotland, is Britain’s best-selling living author and an honored philanthropist. Between 1997 and 2007, she wrote the seven-volume Harry Potter series. Since her support of Maya Forstater, a constant theme of Rowling’s online critics is how “betrayed” they feel by their onetime favorite author.

A woman calling herself Kate Beetle responded to Rowling’s first controversial June 6 tweet by saying Harry Potter books had kept her from committing suicide, but now she feels antipathy for Harry Potter’s creator.

“I decided not to kill myself because I wanted to know how Harry's story ended,” she wrote. “For a long time, that was all that kept me alive. Until I met my husband who helped me learn to love myself and to want to live. You just insulted him to my face. I hate you.”

A transgender activist has even gone so far as to suggest that children are not safe around the author. Nicola Spurling, a Canadian former Green Party candidate, took down the libelous tweet after consulting lawyers.

Although many Christian parents forbid their children Rowling’s wizard-themed books, the author is herself a member of the Presbyterian Church of Scotland. Her politics tend toward the left: she once gave a million British pounds sterling (approx. $1,266,025 U.S.) to the U.K.’s Labor Party, and she also supported the “Remain” campaign against Brexit. However, she also voted against Scotland leaving the United Kingdom in the Independence Referendum of 2014.

Caroline Farrow of CitizenGO U.K. reminded LifeSiteNews that J.K. Rowling is not the only woman who has suffered for defending the definition of womanhood.

“While I am glad that JK Rowling is standing up for biological reality in this way and drawing attention to the deranged insanity of the trans lobby, it ought to be remembered that there are many other women who have been banned from social media and faced real-life consequences and harassment as a result of stating identical views who don’t have her resources or celebrity support,” Farrow said.

“It also demonstrates the division within the left when they are prepared to throw one of their own to the wolves.”