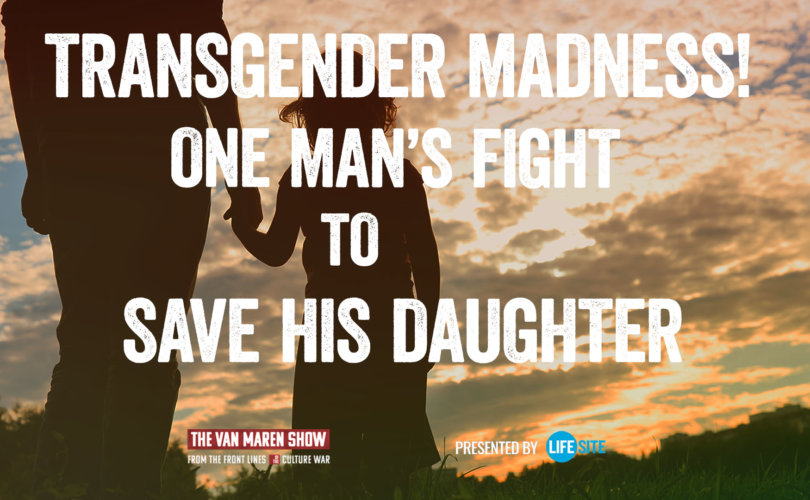 July 29, 2020 (LifeSiteNews) — A father, who cannot be named due to a publication ban, was ordered by a judge to call his daughter a boy or face family violence charges. The father’s daughter was undergoing testosterone treatment against his wishes after being convinced by her school counselor that she was a boy. To top it off, the dad couldn’t even share his story or seek help outside his lawyers due to a gag order placed on him by the court.

In today’s episode of The Van Maren Show, the dad shares his living nightmare, exposes the bias of the Canadian court system, and begs other parents to watch for warning signs that their kids are being indoctrinated.

The dad, who divorced a few years ago, tells listeners that his daughter first began having difficulties with boys in grades 5 and 6, so he recommended she start seeing the school counselor. This continued as she developed a serious crush on her 7th-grade teacher and was eventually asked to leave his class because of her behavior. Little did the dad realize, but the entire time his daughter was being taught about the transgender movement. Looking back, the dad recalls an episode where his daughter cut off all of her hair and started wearing a beanie. What the dad didn’t realize at the time was that this was sparked by a very popular YouTube video of a girl who thought she was a boy doing the same thing.

It wasn’t until the dad was looking at his daughter’s 7th-grade yearbook that he realized something was going on. His daughter was listed in the yearbook under a different name. He had never been notified of this, but the school had been treating his daughter like a boy.

The man’s ex-wife recommended they take their daughter to see a doctor who was a leading transgender expert. The dad agreed, thinking an expert would clearly see that his daughter did not think she was a boy (she had had serious crushes on two of her male teachers at this point) and that there was something else going on.

Unfortunately, the dad didn’t know that the doctor is known for affirming his patients, with close to 100% of his patients completing gender transitions. The doctor affirmed the dad’s daughter and recommended she start testosterone treatments right away. When the dad pointed out his daughter’s clear infatuation with males,  the doctor replied that she was a gay boy in a girl’s body.

The dad continued to try to find coping mechanisms and other solutions for his daughter to address her underlying mental health issues. His daughter’s family doctor ended up referring her to British Columbia Children’s Hospital for additional testing and assessment. Unfortunately, it wasn’t what the dad and the family doctor expected.

Instead of assessing his daughter, B.C. Children’s tried to start testosterone therapy at her first visit. After refusing to sign the consent forms for his daughter to start treatment, the dad received a letter in the mail stating he could no longer have access to his daughter’s medical records nor was his consent required for future procedures due to the Infants Act, which allows a minor to consent to their own medical procedure without parental consent.

This letter sparked a legal battle of the dad against his daughter, who had an activist attorney fighting for her transition. The judge at the time ordered the dad to use male pronouns when speaking about his daughter, to affirm her in her desires to transition, and placed a gag order on him. Anything besides championing his daughter’s “transition” would be considered “family violence.”

The dad spoke with a U.S. journalist from the Federalist the same evening as the ruling and was quickly pulled back into court for violating his gag order and not using male pronouns to refer to his daughter in the interview.

The dad brought both these rulings to the court of appeals, which eventually ruled that the dad’s daughter could continue taking cross-sex hormones, which she had already been doing for a year, but removed the threat of arrest if the dad broke the original orders.

Additionally, the court noted that it was up to the treating physicians to make the best decisions for his daughter, not up to him, nor his daughter. This effectively places liability on these physicians in the future as they work to push an agenda instead of protecting their patients.

The dad warns parents, especially in Canada, about what schools are doing behind parents’ backs to indoctrinate children like his daughter and push the transgender agenda.

“What they’re doing is on lunch breaks, they’re taking kids in and giving them cross-sex hormones,” the dad warns listeners.

The dad and Van Maren continue to discuss Abigail Schrier’s new book, Irreversible Damage, and the huge spike in prevalence of girls reporting gender dysphoria, jumping from 0.002%–0.003% to 3%.

The dad warns parents to pay attention to warning signs and have open dialogue with their kids. He also encourages parents to connect with other parents undergoing similar struggles to provide each other support, advice, and knowledge.

The dad sees this as a three-pronged fight to save children using the legislature, the courts, and the media. We need to change laws, we will have to fight in the courts, and we need the media to share the message. He is hopeful that we will see change to protect children, as there is widespread support for the issue and outrage over what has happened with his daughter.

The dad has started a foundation to support families whose children are “transitioning” and to support individuals who are working to “detransition.” You can learn more at Caenis.org.