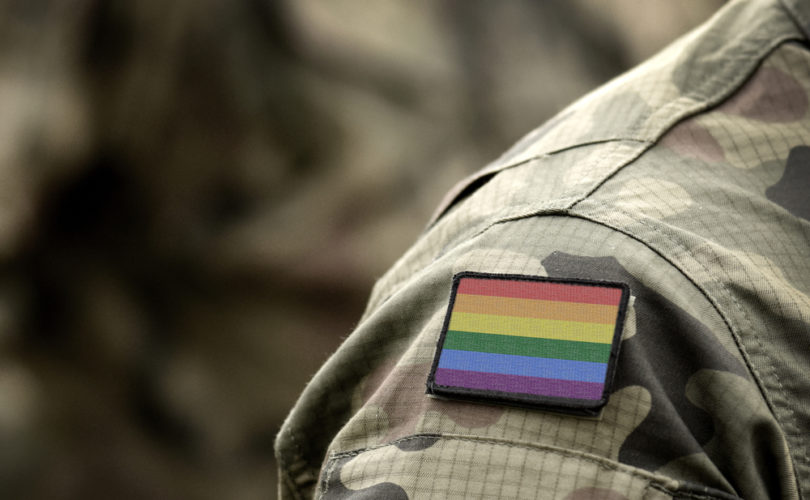 BALTIMORE (LifeSiteNews) – The first openly “transgender” officer in the U.S. Army turned out to be a Russian spy, according to a federal grand jury indictment against Army Medical Corps Maj. Jamie Lee Henry and his wife, Johns Hopkins University anesthesiologist Anna Gabrielian.

The Washington Free Beacon reported that Henry, who won media praise and sympathy for formally changing his name and “gender identity” to female while on active duty in 2015, have been charged with conspiracy and wrongful disclosure of individually identifiable health information for allegedly giving medical information on Fort Bragg military personnel to an undercover FBI agent they thought was a Russian diplomat.

Henry, a doctor at Fort Bragg, is accused of giving the agent information on five patients at the base. He allegedly told the agent he had unsuccessfully offered to join the Russian military in the wake of Vladimir Putin’s invasion of Ukraine, and that he believes “the United States is using Ukrainians as a proxy for their own hatred toward Russia.”

Gabrielian, meanwhile, allegedly gave the agent information on a spouse of an Office of Naval Intelligence employee and “highlighted” a medical issue “Russia could exploit,” all because “she was motivated by patriotism toward Russia to provide any assistance she could to Russia, even if it meant being fired or going to jail.”

Both allegedly also requested that their children be given a “nice flight to Turkey to go on vacation because I don’t want to end in jail here with my kids being hostages over my head.”

That’s the part of this people won’t admit. Being mentally ill should disqualify you from service. https://t.co/Dg3NTvnsjx

Notably, several media outlets, as well as the U.S. Justice Department itself, refer to Henry with accurate male pronouns in discussing the case, rather than indulging his preferred trans pronouns, perhaps to deemphasize how the case reflects on gender-confused individuals in the armed forces:

Odd.
The article refers to Henry, who is claimed to be the first openly transgender officer, as 'he' and 'husband.' They never mention the trans identity at all.https://t.co/3cxRKxsE2L

Regardless, the situation appears to be the latest instance of the fallout from the Pentagon and the Biden administration prioritizing leftism over mental health and military excellence.

The steady rise of “woke” ideology within the military, which has persisted and grown since the Clinton years despite the presidencies of Republicans George W. Bush and Donald Trump, has if anything been intensified by President Joe Biden, who upon taking office quickly moved to open the military to recruits suffering from gender dysphoria, in a reversal of Trump administration policy.

Also early in Biden’s presidency, his Defense Secretary Lloyd Austin ordered a force-wide stand down “requiring all units to discuss the threat of extremism within 60 days,” as the first step in “a concerted effort to better educate ourselves and our people about the scope of this problem and to develop sustainable ways to eliminate the corrosive effects that extremist ideology and conduct have on the workforce.”

As part of this review, the Pentagon produced training materials identifying pro-life Americans and government critics as potential “extremists” and solicited input from far-left groups such as the American Civil Liberties Union (ACLU) and Southern Poverty Law Center (SPLC). Lt. Col. Matthew Lohmeier, who was removed from command of the 11th Space Warning Squadron at Buckley Air Force Base over his criticism of “woke” ideology in the military, says that videos presenting Americans and whites as “evil” were “sent out to every base (and) service member,” who “were asked to watch (them) in preparation for” the extremism stand down.

Biden’s Pentagon leaders are also enforcing COVID-19 vaccine mandates on American service men and women, provoking lawsuits and threatening soldier and pilot shortages in the tens of thousands, which only adds to broader problems of force strength, troop morale, and public confidence.

During a Pentagon press briefing in April on the Army’s budget for Fiscal Year 2023, Under Secretary of the Army Gabe Camarillo announced the Army had “proactively made a decision to temporarily reduce our end strength from 485,000 Soldiers to 476,000 in FY ’22, and 473,000 in FY ’23.” Military Times reported at the time that this “could leave the service at its smallest size since 1940, when it had just over 269,000 troops.”

Further, Gallup and Ronald Reagan Institute polls have both shown that the public has lost confidence in the military’s leaders, which presumably also has a significant effect on prospective soldiers’ willingness to sign up.

Perhaps most alarming, in March 2021 Yahoo News revealed a simulation the U.S. Air Force ran the previous fall to assess America’s ability to handle a Chinese biological attack, which culminated in disaster — and, according to one official, was not an outlier.

“More than a decade ago, our war games indicated that the Chinese were doing a good job of investing in military capabilities that would make our preferred model of expeditionary warfare, where we push forces forward and operate out of relatively safe bases and sanctuaries, increasingly difficult,” Air Force Lt. Gen. S. Clinton Hinote, deputy chief of staff for strategy, integration and requirements, told Yahoo at the time. “The definitive answer if the U.S. military doesn’t change course is that we’re going to lose fast. In that case, an American president would likely be presented with almost a fait accompli.”