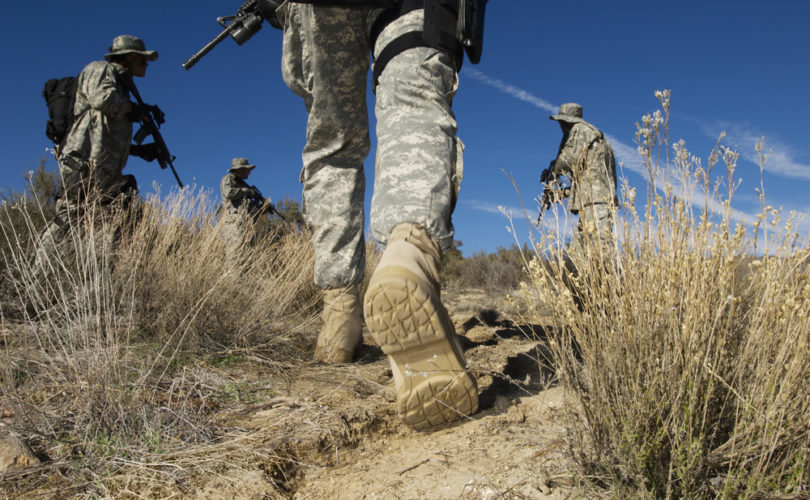 WASHINGTON, D.C., August 28, 2015 (LifeSiteNews) – Transgender people who want to join the military while presenting themselves as members of the opposite sex – and possibly receiving taxpayer-subsidized sex-change operations – may do so starting next May.

According to a draft timeline recently circulated among top Department of Defense (DoD) personnel, the ban on “openly” transgender soldiers will be lifted on May 27, 2016.

The DoD is considering a pilot program to let soldiers take a sabbatical from active service in order to “make their transition” – that is to say, procure hormone drugs or genital reconstruction surgery in order to appear more like a member of the opposite sex.

Some reports claim that the implementation of transgender accommodations has incurred little to no opposition in the military. However, several current and former service members have indeed expressed concern over the change.

In March, the AP reported reservations among top military brass regarding the new transgender policy. The officials agreed to express themselves only on the condition of anonymity, “because they were not authorized to discuss the matter publicly.”

Questions included where to house transgender soldiers, what uniforms these soldiers should wear, and what bathrooms they should use.

“Before changing any policy,” Boykin wrote, “the impact on military readiness has to be the first consideration. The Pentagon must answer whether this proposed policy makes our military more capable of performing its mission. The answer is a very clear and resounding no.”

“Allowing the Obama administration to use the military as a tool of social re-engineering will only undermine morale, unit cohesion, and readiness,” Boykin concluded.

Like Lt. Gen. Boykin, the anonymous service members also worried about the policy's effect on unit cohesion and morale – the latter of which is reportedly at “rock bottom.”

“Let's not forget – transsexualism is at its root a serious mental disorder – one classified as such by the military's own Defense Department!” Perkins wrote. “If these men and women are confused about their gender, what's to keep them from being confused about their mission?”

On the other end of the spectrum, David Stacy, who directs government affairs at the homosexual activist Human Rights Campaign, likened the institution of the new transgender policy to the repeal of Don't Ask, Don't Tell in 2011. “There were no signs of problems with unit cohesion,” Stacy claimed, when service members were allowed to openly profess their desire for members of the same sex. However, male-on-male sexual assault in the military has increased precipitously since then.

Complaints against the military's ban on soldiers portraying themselves as the opposite sex have been persistent over the past couple of years. When the DoD released in 2014 a homosexual-friendly edition of the department's regularly updated “Human Goals Charter,” transgender activists expressed disappointment over the document's refusal to condemn discrimination based on “gender identity.”

At the time, Lieutenant Commander Nathan Christiansen, speaking for the Pentagon, justified the omission by claiming that “gender identity” falls under the category of “sex discrimination” and thus did not need special mention. However, Christiansen also stated that the DoD had no intention of updating its transgender ban.

He too divulged misgivings about mainstreaming transgender soldiers: “The Department considers that service members must serve in austere environments, many of which make necessary and ongoing treatments related to sex reassignment and many other conditions untenable.”

FRC's Lt. Gen. Boykin expressed suspicion over the DoD's about-face on transgender policy since 2014. “No new science has led to the Pentagon'[s] transgender study – only the politics of the Obama administration and the transgender movement,” Boykin wrote in his July statement.

The Obama administration has tenaciously pursued accommodations for individuals who want to be treated as members of the opposite sex, notably through DoD policies, Equal Employment Opportunity Commission lawsuits targeting private companies, and aggressive campaigns against public and Catholic schools.