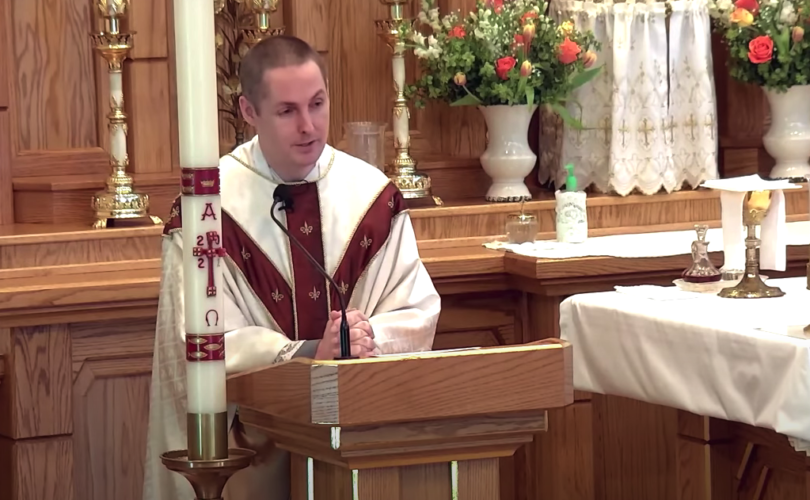 BLOOMINGTON, Indiana (LifeSiteNews) – A Franciscan priest said that transgender ideology is an affront to at least four Commandments.

“One of the most recent cultural challenges to the Sixth Commandment and to the reality and integrity of the human person is the transgender ideology,” Fr. Terrance Chartier of the Franciscan Friars of the Immaculate said during his homily on May 30 at the friary in Bloomington.

Lying to someone and telling them they are a different sex violates the Eighth Commandment, while helping them mutilate their body through surgery or drugs violates the Fifth Commandment, he said later in his homily. “Attempting to chemically or surgically or hormonally alter my gender is a grave sin, it’s actually a form of mutilation,” he stressed.

— Article continues below Petition —
PETITION CONGRESS: Stop the grooming & sexualization of children in schools
Show Petition Text
6587 have signed the petition.
Let's get to 7500!
Thank you for signing this petition!
Add your signature:
Show Petition Text

“Transgender promoters believe that sexual identity, and therefore human identity, is self-defined and it’s the personal choice of the individual,” the priest said. “So, facts of nature aren’t facts unless I say that they are. That would essentially be their ideological position.”

Fr. Chartier said that “transgenderism is the latest fruit of what Pope Benedict XVI called the dictatorship of moral relativism.”

READ: Cardinal Müller: Transgender ideology is ‘self-mutilation,’ promoting it is a ‘serious sin’

He pointed out that transgenderism is simply a new form of dualism, a heresy.

“From the point of view of philosophy or ideas, transgenderism is actually a new form of an old heresy known as dualism,” the priest said during his May 30 homily. He said 17th-century philosopher Rene Descartes erroneously taught, the Franciscan priest explains, that “your body is just a machine, a machine in which the soul exists like a ghost, so the body is not an essential part of who you are is what he said.”

Descartes told people that “the soul just inhabits it like a ghost might inhabit a haunted house. Does that maybe sound a little familiar in the sense that my body is separate from who I am, from how I identify?”

Furthermore, people who suffer from gender dysphoria should realize they are made in the image of God, and attempts to live in the opposite sex violate this idea.

“Our bodies aren’t just things, they’re actually gifts from God, so my body isn’t an accident. Meaning, one, it’s not a mistake, two, it’s not something accidental or secondary to my personal identity, it actually is essential to who I am as an individual human person,” he said.

Mental illness is at the heart of transgenderism, Fr. Chartier said.

“If you scratch below the surface, you’ll see that the transgender people are actually very broken and fragile people in many respects,” he said.

He said that discrimination against someone based on their personal struggles with their identities is wrong, as is bullying and violence, but that does not mean we should accept who someone says they are.

He said that if people “don’t embrace the transgender ideology” they are “made to feel like an outsider.”

“They brand you, maybe they fire you from your place of employment, they might cancel you, people even get assaulted for standing up for the truth regarding human sexuality,” he said.

He concluded by saying that we should not affirm a gender-confused person’s choices.

He said there will be “literally Hell to pay” for adults to help children attempt to alter their sex, unless they repent.