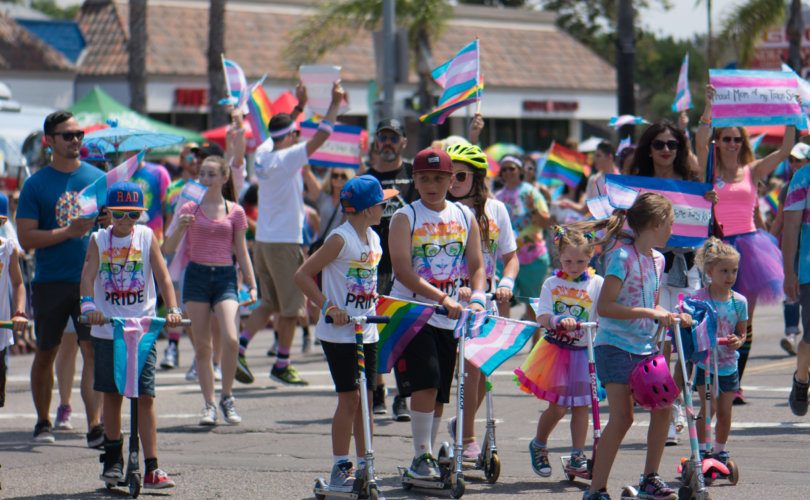 LONDON, England, July 9, 2020 (LifeSiteNews) — Transgender ideology is a recent invention that is having a “corrosive impact” on society, a British think tank has affirmed.

Civitas, the Institute for the Study of Civil Society, published in June a monograph by researcher Joanna Williams, its director of freedom, democracy, and victimhood, titled “The Corrosive Impact of Transgender Ideology.”

“This report explores the social impact of changed understandings of gender and, in particular, the emergence of the idea of transgender,” Williams wrote.

“A new orthodoxy that gender identity is brain-based and innate, something we need to discover for ourselves and then reveal to a readily accepting world, has rapidly gained ground,” she continued.

“This seemingly benign view has consequences for how we socialise children and organise society. It calls into question sex-protected rights and freedom of association. The existence of female-only prisons and refuges or girls’ schools, clubs and sports is thrown into doubt. Yet far from engaging in a free and open discussion, transgender activists have moved to curtail debate. The consequences of this and the impact it has on the lives of women and children are detailed here.”

The short book neatly encapsulates the recent shift in thinking on sex and gender, the impact this shift is having on women and children, particularly girls, and the reasons why transgenderism, once limited to a few middle-aged men and niche academics, now dominates civil discourse and marches, Marxist-like, through the institutions.

Williams’ report includes a series of recommendations: a moratorium on reform of the Gender Recognition Act; clarification of sex-based protections as set out in the Equalities Act 2010; the prohibition of puberty blockers and cross-sex hormones to anyone under 18; the prohibition of “transitioning” at school without parental permission; and a separation of lessons on “LGB” from lessons on “T” in the sex education curriculum.

The recommendations also stipulate that lessons on transgenderism must not contradict what pupils are taught in their biology and other science classes.

Also mentioned here is the rapid spike in the numbers of British girls hoping to escape their female identities.

“The decade 2008-2018 saw a 4,400 percent increase in the number of girls being referred for treatment,” Williams reported.

“Three-quarters of all children seeking help to change their gender are now girls.”

Williams also discussed the danger men who insist that they are women can pose to women’s physical safety. Another named individual familiar to readers following the transgenderist advance through the British institutions is David Thompson:

… a convicted pedophile and rapist, who was jailed for life in the early 2000s. He was also on remand for grievous bodily harm, burglary, multiple rapes and other sexual offenses against women. In September 2017, Thompson, now identifying as a woman called Karen White, was moved into a women’s prison. Once there he sexually assaulted a number of female inmates.

Transgenderism is a recent invention

The report also dispels a few myths being built up by eager transsexualists around their chosen philosophy. Williams explained, for example, that transgenderism is “a recent invention.”

“The transsexuals of yesteryear did not deny the reality of having been born male or female even as they sought to change sex, neither did cross-dressers who experimented and played with sexual conventions and stereotypes,” Williams wrote.

“In contrast, transgender people today are the creation of gender theory from within the academy merging with developments in surgery and psychiatry.”

Another myth is that there are large numbers of transgender individuals who have undergone medical intervention. According to Fair Play for Women, an advocacy group for female athletes, “as of June 2018, only 4,910 Gender Recognition Certificates had been granted,” Williams wrote.

“Three quarters of these were to male-born transgender people who were mostly above the age of 50,” she added.

“Among people who identify as transgender, only a tiny proportion (estimated to be 0.01 percent) undertakes medical interventions such as surgery or hormone therapy.  This means that the vast majority of transgender people are simply self-identified and retain a male or female body according to their sex.”

400 transgender people work for the BBC

Williams addressed the implications of men demanding to be legally recognized as women. The researcher also revealed a crucial reason why transgender people seem to be everywhere and always a subject of conversation: their disproportionate presence in certain professions and workplaces, notably the British national broadcaster, the BBC. According to Williams, an internal survey conducted by the BBC suggested that 400 transgender people work for the organization.

“In other words, transgender people are four times more likely to be employed at the BBC than found within the general population,” she wrote.

Williams’ report is scholarly yet fully accessible and written with a calm and thoughtful tone. The seriousness of the material and input from people earnestly fighting for freedom of speech and for sex-based protections for women add intensity and passion.

One example is the cri-de-coeur Dr. Nicola Williams of Fair Play For Women, who summed up what transgender ideology ultimately means for the female half of the woman race:

Over the years that have gone by, trans ideology has changed, stripping away the need for surgery, stripping away even the need for a diagnosis of gender dysphoria. We are now being faced with the prospect of opening up the entire sex category to any male who says he’s female. If any man can be a woman, the word woman becomes meaningless and so do women’s rights. This is now a crisis situation that women can’t ignore or be expected to simply tolerate.

LifeSiteNews has attempted to reach out to Joanna Williams and to Civitas but has not yet received a response.

One unfortunate absence from Williams’ report is the constant harassment of British Catholic apologist Caroline Farrow by Stephanie Hayden, Dr. Adrian Harrop, and their supporters. As an early and well-known critic of the Mermaids charity’s efforts to facilitate “sex-change” for children, Farrow was excluded from a general overview of British resistance to the transgender ideology

However, given its thorough exploration of the topic and its deft destruction of transgender myths, “The Corrosive Impact of Transgender Ideology” will be welcomed by many parents on both sides of the Atlantic.