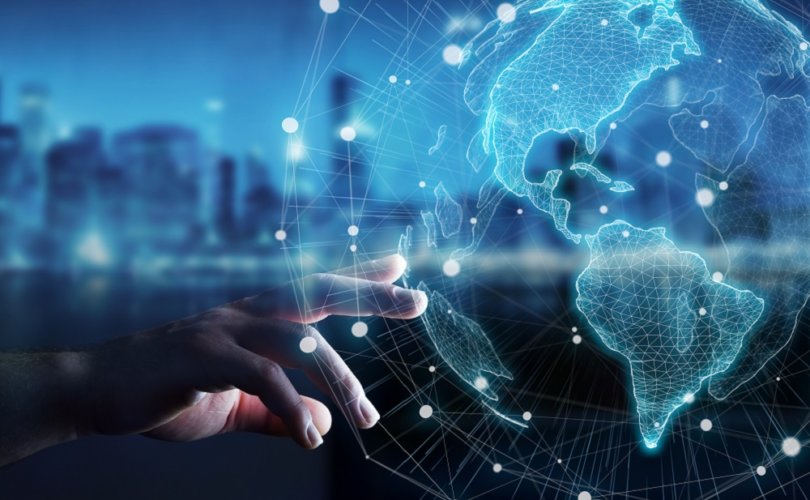 November 10, 2020 (LifeSiteNews) — The COVID-19 pandemic was manufactured by the world’s elites as part of a plan to globally advance “transhumanism” — literally, the fusion of human beings with technology in an attempt to alter human nature itself and create a superhuman being and an “earthly paradise,” according to a Peruvian academic and expert in technology.

This dystopian nightmare scenario is no longer the stuff of science fiction, but an integral part of the proposed post-pandemic “Great Reset,” Dr. Miklos Lukacs de Pereny said at a recent summit on COVID-19.

Indeed, to the extent that implementing the transhumanist agenda is possible, it requires the concentration of political and economic power in the hands of a global elite and the dependence of people on the state, said Lukacs.

That’s precisely the aim of the Great Reset, promoted by German economist Klaus Schwab, CEO and founder of World Economic Forum, along with billionaire “philanthropists” George Soros and Bill Gates and other owners, managers, and shareholders of Big Tech, Big Pharma, and Big Finance who meet at the WEF retreats at Davos, Switzerland, contended Lukacs.

Transhumanism is far from a benign doctrine. Rather, it is at complete enmity with Christianity, Lukacs pointed out during the virtual in Truth Over Fear Summit organized by California-based Catholic writer and broadcaster Patrick Coffin.

Transhumanists take science as their religion and believe in a philosophy of “absolute relativism” that claims that individuals can change reality at will, and they seek to “relativize the human being” and “turn it into a putty that can be modified or molded to our taste and our desire and by rejecting those limits nature or God have placed on us.”

Transhumanism therefore requires “the destruction of “the Judeo-Christian morality, which is based on absolute principles and values.”

Those raising alarm about the Great Reset often overlook the crucial role of technology in the plans of the meta-capitalists, contended Lukacs, who has Ph.D. in management from the Manchester Institute of Innovation Research (MIoIR) from the University of Manchester.

The COVID-19 pandemic was “just another social engineering project deliberately planned and implemented by predatory meta capitalism to achieve the ultimate end: redefining and reconfiguring the human nature and condition,” he argued in a presentation in Spanish.

“I have the firm conviction that this pandemic has been manufactured and its purpose is none other than to initiate, as they say, or implement the Great Reset,” which will open the door to the advancement of the transhumanist agenda, he said.

Indeed, WEF’s Schwab has been promoting the Great Reset as a way to “harness the Fourth Industrial Revolution,” a term he coined, which, he declared in January 2016, “will affect the very essence of our human experience.”

Schwab described the Fourth Industrial Revolution then as “a fusion of technologies that is blurring the lines among the physical, digital and biological spheres,” Lukacs said.

“The Fourth Industrial Revolution is nothing other than the implementation of transhumanism on a global level,” emphasized Lukacs.

Transhumanism as a political ideology and cultural movement was defined in 1998 by Swedish economist Nick Bostrom, then a professor at Oxford, and David Pearce, a British philosopher, who that year founded the World Transhumanist Association.

More recently, Yuval Noah Harari, the Israeli historian and author of Homo Deus, who is regarded as a “great visionary,” has been promoting transhumanism.

They reject the Christian belief in absolute truth, and that God created human person in His image and likeness, and see absolute values as “a brake for their pretensions of transhumanist and globalist progressivism.”

That’s why the “approval of abortion” is key to understanding “why we are entering fully into this transhumanist agenda” of the Fourth Industrial Revolution, Lukacs said.

When abortion was approved, the “political, economic order and moral values” on which Western civilization is based collapsed.

“Abortion means nothing other than the transition of the human being from a subject of rights to an object of commercialization, to an object of experimentation,” he said.

“Life ceases to have an inherent value, an inherent dignity. It becomes an object of consumption, an object of production,” and this aligns perfectly with the goal of transhumanists “to experiment with the human being.”

Transhumanism is “a struggle against those propositions of absolute values,” said Lukacs, “and what it embodies in progressivism is absolute relativism.”

Evidence that “absolute relativism” has caught hold in the Western world is the rapid and widespread rise in trangenderism.

Examples of these attempts to reshape one’s reality at will include the American known as Lizard Man, the Canadian man living as a six-year-old, the British woman who blinded herself because she wanted to be disabled, and the German woman who injected herself with melatonin to darken her skin to identify as black.

These are “previous states of transhumanism, a kind of accustoming, especially of the new generations, to accept this diversity,” Lukacs said.

No longer science fiction but reality

While many transhumanist proposals are rooted in science fiction, Lukacs pointed out they now have the technology to attempt to realize their mad aspirations.

Transhumanists propose to increase longevity by using CRISPR genetic editing, which has been used to triple the lifespan of mice. Thus, using this technique on human beings, it is conceivable that people could live to the age of 200 or 300 years old, he said.

They propose to increase human intelligence by planting chips in people “that have greater processing capacity” than the human brain.

An example is Elon Musk’s NeuraLink, which is an “interface that is applied to the cerebral cortex” and which Musk says will help people with Alzheimer’s or epilepsy, but which Lukacs speculates could “open the door” to “neuro-hackers.”

There is also the “post-humanist” school of transhumanism, of which economist Bostrom is a proponent.

As for the “promise of super wellbeing,” philosopher Pearce said it was “the hedonist imperative” to “genetically modify us to aspire to super well-being.”

“What Pearce is saying is that through genetic modification, we’re going to be virtuous human beings,” and that “we have to forget about pain and suffering, we have to get rid of those genes that make us aggressive, violent, jealous, that force us to fight and kill each other,” said Lukacs.

“When you put all these things into the balance, what you are realizing is what you are looking at is literally the destruction of human beings, of Homo sapiens, and their conversion to Homo deus.”

But as with the Great Reset, the elites “twist” the language and disguise their transhumanist agenda behind vaguely benign phrases, so Schwab’s Fourth Industrial Revolution is “sold to us as an idea that’s not necessarily going to affect us,” or that it is progress that will benefit humanity, he said.

However, just as ordinary people will suffer in the Great Reset under “the architecture of oppression,” as Edward Snowden phrased it, so they will bear the brunt of the experimentation by transhumanists.

“It’s very worrying because for achieving that kind of dream, many, many mistakes will happen for sure. … The burden will be carried by the people that get affected by this in their health, in their lives, in their economic situation and in their psychological or mental state,” said Lukacs.

“It’s a very, very costly experiment. And [the elites] are not going to bear any responsibility for this. Trust me,” he told Coffin.

“For them, it’s wonderful. For the rest, this is just dystopian.”

Lukacs also contended that the global elites encountered an unexpected roadblock to their plans in U.S. president Donald Trump.

“Actually, the structure of power is not that complicated,” he told Coffin in an online Q&A session.

“And you have those guys on Big Tech, Big Pharma, Big Finance, Big Construction, everything big, the big corporate transnational world. Those are the billionaires who through their philanthropies, their billion-dollar pledges and all this kind of stuff, they … funnel money downwards to all the politicians, who are basically rented politicians, they rent them, they run the world for them,” he said.

“It’s really the privatization of power through philanthropy,” added Lukacs.

“And then, of course, you will have a layer of middle ground or middle level institutions, NGOs, universities, foundations, and then you’ll go down to grassroots local government. It’s a … pyramidal structure.”

But Trump is one key public figure who could evidently not be rented.

“It is so obvious that in the States right now for the past, what, four, five months, a state coup has been in the making. As simple as that. I have no problem in saying it openly,” Lukacs told Coffin.

“That’s the situation. They have tried to oust a president that was democratically elected because they are desperate. China is still progressing. And … their partners in the West, they’re just not catching up. So, they are a little bit desperate. China is not going to wait.”

It’s ‘child abuse’ for scientists to gene-edit human embryos and then destroy them: Ethicist