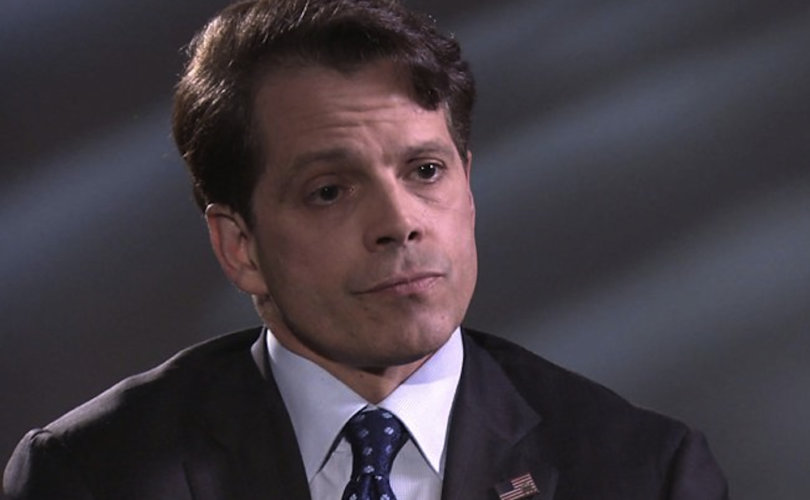 November 29, 2016 (LifeSiteNews) — Anthony Scaramucci, a member of President-elect Donald Trump’s transition team, erroneously told the BBC that Trump will be the first pro-“gay rights” president and falsely claimed that homosexual pop superstar Elton John would be performing at Trump’s inaugural.

John quickly denied Scaramucci ‘s assertion and said he would not be part of Trump’s inaugural festivities. BBC reports that John actually slammed Trump as a “barbarian” while raising funds for Democrat Hillary Clinton:

“Performing at a fundraising event for Mrs. Clinton in Los Angeles in October, he was reported to have told the crowd: ‘We need a humanitarian in the White House, not a barbarian.’”

Scaramucci, a high-profile investment magnate, Wall Street insider, and founder of SkyBridge Capital, apparently was attempting to show his BBC interviewer that Trump, although politically incorrect, is non-ideological and no doctrinaire conservative. Before getting it wrong on Elton John “doing our concert on the Mall for the [Trump] inauguration,” he told BBC:

“By the way, this will be the first American president in U.S. history that enters the White House with a pro-gay rights stance.”

That statement is patently untrue — although curiously it was reported as if factual by some media. Both Bill Clinton and Barack Obama ran as strongly pro-homosexual-“rights” candidates and then governed as pro-homosexual presidents.

Even though Clinton in 1996 signed into law the pro-traditional-marriage “Defense of Marriage Act” (DOMA), which Obama later helped eviscerate, he later regretted it. Clinton can claim a host of dubious LGBTQ public policy “firsts,” including risking his popularity to try to fulfill a campaign promise to allow open homosexuals in the military.

Scaramucci, whose BBC interview will air in full on Wednesday, also boasted about his own support for homosexual advocacy:

“I’m also a gay rights activist. … I’ve given to the [pro-“gay” Republican] American Unity PAC … to the Human Rights Campaign, I’m for … marriage equality [the LGBTQ activist euphemism for homosexual “marriage”],” he told the BBC in an interview excerpt on the BBC website.

There is a growing battle within the GOP over whether to honor the Party’s traditional pro-natural-family platform, which implicitly rejects homosexuality as the basis for “civil rights” and calls for the repeal of the pro-“gay marriage” Supreme Court Obergefell ruling, or to side with libertarians who want to move away from or reject such long-standing platform positions.