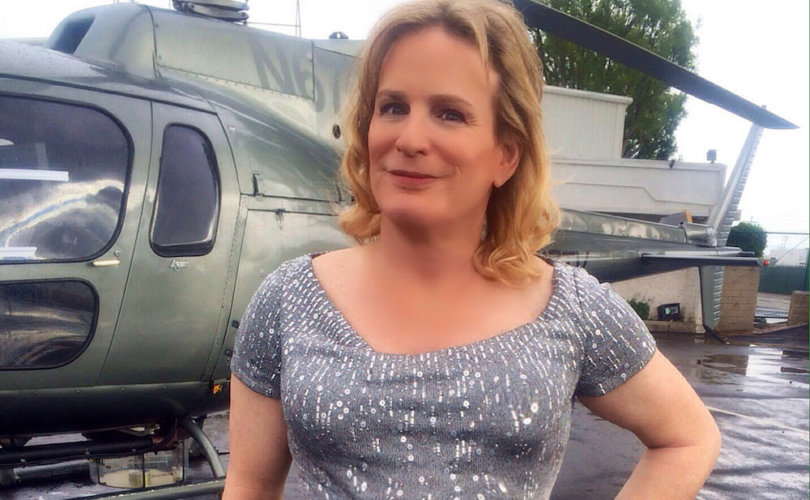 June 16, 2017 (LifeSiteNews) — Male-to-female transsexual reporter “Hannah Zoey” Tur, formerly Bob Tur, is in the news again, this time for publicly blasting his own daughter, MSNBC host Katy Tur, as “transphobic” for avoiding contact with him since he began his “transition” to faux womanhood.

In a June 13 Facebook post, Bob Tur wrote, “Truth is my daughter does not support the LGBT community. She's Transphobic and fearful that it will hurt her career as a broadcaster in these alt-right times putting career before family. In the words of Paddy Chayefsky: She's pure television.”

Walt Heyer, a former transsexual who now urges gender-confused men not to go through “sex reassignment surgeries,” said Tur’s politicized public putdown of his own daughter “shows you how deeply their disordered thinking runs.”

Heyer told LifeSiteNews that married men and fathers who “change genders” to live as “females” are narcissists guilty of the “ultimate family betrayal … because it’s always all about them.”

Bob aka Hannah Zoey Tur is the same “transgender” activist who in 2015 threatened conservative Ben Shapiro, editor-in-chief of Daily Wire, on the HLN “Dr. Drew” show, after Shapiro addressed him as “Sir.” Sitting next to Shapiro on a panel, and with his hand on the back of Shapiro’s neck, Tur said, “You cut that out now, or you’ll go home in an ambulance.”

The much younger yet unflappable Shapiro refused to back down, saying, “It’s not rude to say someone who is biologically male is a male. … The entire discussion is whether we are embracing mental illness and delusion as a society.”

Bob Tur’s Facebook public shaming of daughter Katy came just three days after the New York Times ran a long, sympathetic profile of her. The reconciliation between the two referenced in the Times piece apparently fizzled, as it took less than a year for Bob Tur to publicly switch from telling the Hollywood Reporter last July that his daughter was not “transphobic” to now saying that she is.

“Transphobic” is the gender-bending counterpart of “homophobic.” Both are widely used to stigmatize critics of LGBTQ lifestyles by conflating disagreement with irrational fear.

In another Facebook post, also June 13, Bob Tur, commenting on a selfie of him with his son Jamie, referred to Katy as Jaime’s “anti-LGBT transphobic sister Katy.”

Jerilayne Waxman commented on that post: “God almighty woman. Stop alienating your other child. I get that you have an uphill battle in your fight to be accepted for who you are. But stop publicly shaming your daughter. You aren't helping the cause. At all.”

Here is the June 10 New York Times account of Katy’s interactions and attempted reconciliations with her gender-confused father:

“Last July, in an interview with the Hollywood Reporter, Zoey Tur claimed that Katy Tur had been estranged since her [Bob Tur's] gender transition. 'It's not that she's transphobic,' Zoey Tur said. 'It's that her hero father has become this. And it's fear of not fitting in. It's the pressure of being on network television.

“[New York Times reporter Luisita Lopez Torregrosa:] When I brought up her father's remarks, Ms. Tur went silent. After a pause, she disputed the accuracy of her father's version and said that their rift had nothing to do with her father's transition, and that they are speaking now. 'We were not on speaking terms for a little while,' she said, 'but that's not because of the transition.'

“Later, from Asia, Zoey Tur emailed me: 'About my transition, I demanded early on that my children accept what even I don't fully understand myself. No child should have to deal with a father in transition from male to female. Perhaps it will be the subject of Katy's second book!' One day last December, she said, 'Katy called to tell me she was sorry and that she loved and accepted me. We agreed to set things right and have been working on that goal.'”

Heyer, author of several books critical of transgenderism, said whatever the status is of the conflict between Bob and Katy Tur, “I take the daughter’s side. … Her father is obviously so deeply narcissistic and self-centered.”

“The daughter is the saner of the two,” Heyer told LifeSiteNews. “I believe children should distance themselves from such a mentally disturbed person.”

Others agree that Bob aka Hannah Zoey Tur is badly mistreating his daughter.

Carson Wyatt, responding to Tur’s Facebook post calling Katy “transphobic,” first called him a bad name and then said, “No wonder your daughter doesn't want anything to do with you anymore. Self-important media whore. Your daughter has every right to have mixed feelings about you, you were her father and now you are just a second mother.”

Heyer, who once lived a double life as “Laura” and went through the full, body-mutilating transsexual surgeries to try to “become” her, said it is appropriate for the child of a male-to-female transsexual to “hold off” on spending time with him until he “restores his sanity” and “stops playing this silly game of ‘I’m a different gender.’”

When I came out in May of 2013 I told TMZ's Harvey Levin and National Public Radio I was done running, hiding and I would be open and honest. No one would put me back in the closet. I broke that pledge and I've out of integrity. I apologize.

My daughter Katy said she's “terrified” to meet me. She told me the day My x GF Carrie Fisher died that she was going to “set things right” and come see me. That was 171 days ago. Her promise was a whole lot a nuthin. It's been 1,500 days since she last saw me and told me I was a terrible father after having just come out. I was crushed.

On June 8th (I) turned 57 and no call-not even an email. On Pride Sunday the NYTimes published a story about Katy that left me humiliated. The timing and optics couldn't be worse.

Truth is my daughter does not support the LGBT community. She's Transphobic and fearful that it will hurt her career as a broadcaster in these alt-right times putting career before family. In the words of Paddy Chayefsky: She's pure television.

I apologize to you all and will continue to fight for my community.