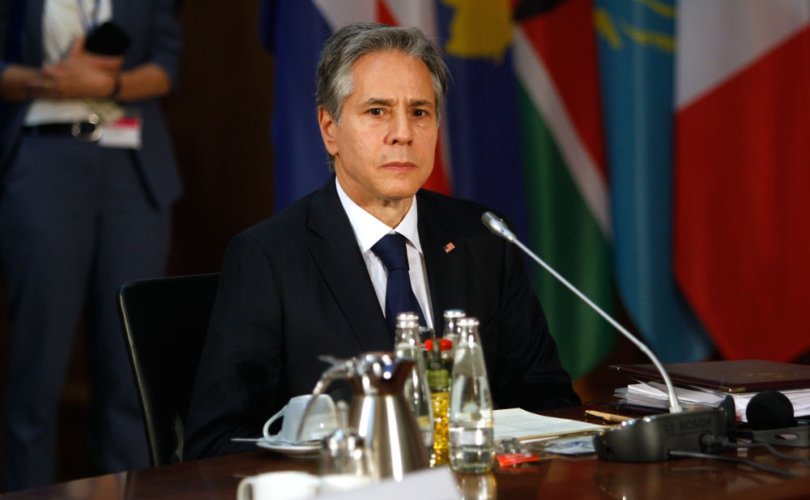 (LifeSiteNews) – Speculation about potential U.S. involvement in the recent attack on the Nord Stream pipelines is gaining traction after U.S. Secretary of State Antony Blinken said on September 30 that the destruction of the pipeline represents a “tremendous opportunity” to “once and for all remove the dependence on Russian energy.”

At a joint press conference with Canadian Foreign minister Mélanie Joly, a reporter asked the two officials about the attack on the Nordstream pipelines and its effect on Europe’s energy crisis.

Blinken replied that Russia has practiced “weaponization of energy” since the war in Ukraine started, therefore the U.S. would “work very closely with European partners as well as countries around the world to make sure that there is enough energy on world markets.”

To substitute for the lack of Russian gas “we’ve significantly increased our production as well as making available to Europe liquefied natural gas [LNG],” said Blinken.

“And we’re now the leading supplier of LNG to Europe to help compensate for any gas or oil that it’s losing as a result of Russia’s aggression against Ukraine,” he added.

Blinken went on to describe the situation with the Nord Stream pipelines and the energy crisis as “a tremendous strategic opportunity”:

My own sense – and I mentioned this the other day – is, look, there’s a lot of hard work to do to make sure that countries and partners get through the winter. Europe itself has taken very significant steps to both decrease demand but also look at ways to pursue the transition to renewables at the same time.  And ultimately this is also a tremendous opportunity.

It’s a tremendous opportunity to once and for all remove the dependence on Russian energy and thus to take away from Vladimir Putin the weaponization of energy as a means of advancing his imperial designs. That’s very significant and that offers tremendous strategic opportunity for the years to come, […]

Blinken had said only a few days prior that the sabotage of the Nord Stream pipelines was “in no-one’s interest.” His depiction of the piepline’s sabotage as a “tremendous opportunity” to cut off gas supplies from Russia to Europe and replace them with American LNG (liquefied natural gas) – along with switching to renewable energy sources – marks an about face.

Michael Shellenberger, former environmental activist, and best-selling author pointed this contradiction out in a tweet:

Blinken Sept 30: Destruction of pipelines a “tremendous strategic opportunity” to “pursue the transition to renewables”

Blinken Sept 30: Destruction of pipelines a “tremendous strategic opportunity” to “pursue the transition to renewables” pic.twitter.com/pioYYU8PZz

Shellenberger added in a reply that “The Russians, by contrast, are eager to repair the pipelines and optimistic that it can be done, which seems like an odd position if you think the Russians blew them up in the first place.”

The Canadian foreign minister echoed Blinken’s reply saying that they are “in solution mode”:

Looking forward, also, where Canada can really make a difference is through our new Kitimat LNG facility, which will be able to provide LNG starting 2025 and therefore increasing production, lowering prices.

This will be also helpful for our European friends.  And, as mentioned when Chancellor Scholz was in Canada recently with also his vice chancellor, we are also working with the Germans and many other European allies to find solutions for the next years when it comes to renewables, and the very important, significant investment in a hydrogen facility in Stephenville, Newfoundland is part also of that plan.

While many leaders of NATO member states, like Canadian foreign minister Joly, have suggested that Russia is behind the sabotage of the Nord Stream pipelines, Russian President Vladimir Putin accused “Anglo-Saxon” powers of being responsible for the attack.

Fox News Host Tucker Carlson also strongly insinuated that the Biden administration may be behind the attack on the pipelines and said that Putin would have to be a “suicidal moron” to blow up his own energy pipelines.

In a tweet that he later deleted, Radek Sikorski, a former Polish Defense Minister and current member of the European Parliament, seemingly thanked the USA for destroying the pipeline.

Since the destruction of the pipelines, the global tension surrounding the Russia-Ukraine war has escalated.