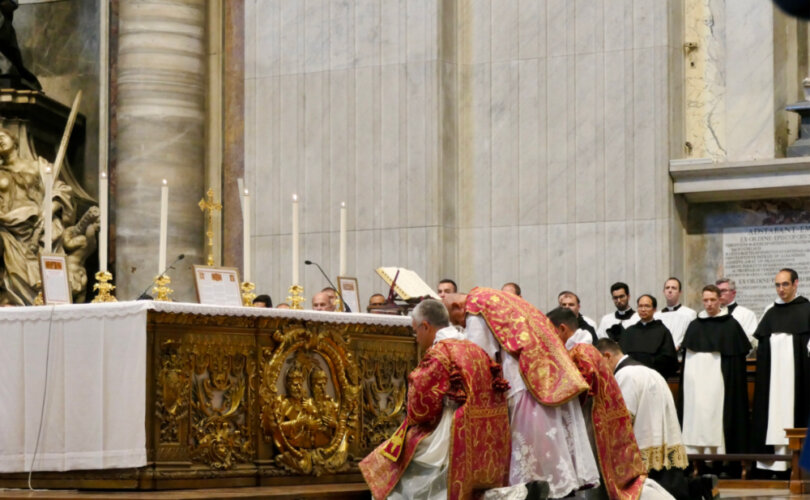 VATICAN CITY (LifeSiteNews) – Over one thousand pilgrims gathered in Rome this weekend to partake in the traditional “Summorum Pontificum” – now “Ad Petri Sedem” – pilgrimage, with the highlight being a solemn Mass celebrated at the Altar of the Chair in St. Peter’s Basilica.

Devotees of the traditional Mass assembled in the Eternal City for a three day pilgrimage to the See of Peter from October 28 to 30.

Starting at the Basilica of St. Mary of the Martyrs, widely known as the Pantheon, on Friday evening, the pilgrims were led by Cardinal Matteo Zuppi, who presided over Vespers. Zuppi is Archbishop of Bologna and president of the Italian Bishops Conference and is widely perceived as papabile.

Tourists gathered outside the basilica as the assembled clergy chanted the Divine Office while the choir joined in providing polyphonic settings of the Vespers.

Cardinal Matteo Zuppi, Archbishop of Bologna and president of Italy’s bishops’ conference, presiding at traditional Vespers this evening in the Pantheon on the feast of the Apostles Simon and Jude. pic.twitter.com/Y64E8SmUwp

The strains of the sacred chants filled the basilica, which was closed to all but those attending the ceremony. Official estimates counted over 600 people gathered in the Pantheon.

On Saturday morning, the pilgrims assembled at the Basilica of San Celso e Giuliano, run by the Institute of Christ the King Sovereign Priest (ICKSP), where they spent an hour in adoration before the Blessed Sacrament. The Rosary was prayed in Latin, while hymns were sung and solemn benediction held.

The pilgrims – from all ages and walks of life – filled the church to standing room only, before spilling out into the streets.

Following the conclusion of the holy hour, flags from 95 countries were hoisted, representing all the countries across five continents in which the traditional Mass is celebrated, “illustrating the universal character of this liturgical attachment,” as the pilgrimage organizers noted.

Led by the processional cross, the amassed clergy and seminarians took position at the front of the procession, which made its way across the river, past Castel Sant’Angelo and up the center of the Via della Conciliazione – heading straight for the Vatican.

In a mark of the perhaps surprisingly warm welcome made by St. Peter’s Basilica to the pilgrimage, the double doors of the basilica were flung open and the pilgrims passed through. Tourists already present in the basilica drew back, thus creating space for the clergy and laity to process around the altar above the Confessio and up to the Altar of the Chair.

Here, pilgrims were greeted by the sight of Cardinal Walter Brandmüller, a notable supporter of the traditional Mass, who was already seated at the front of the pews.

Official counts suggest that some 1,000 people were in the basilica for Mass, with the pews being filled by the congregation, as the clergy seated themselves in the clerical choir. Additional seating was also used for the congregation once the pews became full.

The Mass was celebrated by Monsignor Marco Agostini – part of the Vatican’s Secretariat of State and one of the Papal Masters of Ceremonies. Msgr. Agostini publicly celebrates the traditional Mass daily in St. Peter’s. Such is the demand for this ancient liturgy that LifeSite understands there are three such daily, public traditional Masses in the Vatican.

Pilgrims were both joyous and encouraged at the public and well-attended traditional liturgies in the Eternal City, especially in light of Traditionis Custodes. Pilgrims both young and old, clerical and lay, were united in their devotion to the ancient liturgy and their joy at participating in it in St. Peter’s Basilica.

Christian Marquant, president of Paix Liturgique and of Coetus Internationalis Summorum Pontificum (CISP) – which organizes the pilgrimage – highlighted to LifeSiteNews the support the pilgrimage had enjoyed from Zuppi and Agostini. “We are Catholic, and we will stay Catholic,” Marquant said, noting how the pilgrims were “very blessed” to have been able to publicly witness to the traditional liturgy. “Deo Gratias!” he said.

Speaking to LifeSiteNews, an Irish pilgrim called it a “great privilege to be a part of the liturgy which is truly at the heart of the Church.”

The following day, the pilgrimage concluded by celebrating the traditional feast of Christ the King, at the church of Santissima Trinità dei Pellegrini, run by the Priestly Fraternity of St. Peter. The church was completely filled to standing room only. Once again, the congregation spilled out into the streets as around 1,000 pilgrims assembled to mark the end of the pilgrimage.

Monsignor Patrick Descourtieux, from the Congregation (now Dicastery) for the Doctrine of the Faith celebrated the Mass, which was sung in both polyphony and plain chant by the choir.

Despite the recent restrictions imposed by Pope Francis and Cardinal Arthur Roche on the traditional liturgy, the experience of the weekend was described by many as “tremendously encouraging.” While no bishops or cardinals celebrated the weekend’s liturgies – as has happened on previous occasions – the pilgrimage was a very public witness to the vitality of the Latin Mass and its devotees.

Pilgrims were also encouraged by the apparently warm welcome shown by officials in the Vatican, who reportedly granted swift permission for the Mass to be offered.

While the war against the Latin Mass is in full swing around the globe, following Traditionis Custodes, in Rome the traditional community remains a vibrant and prominent part of the Catholic Church.