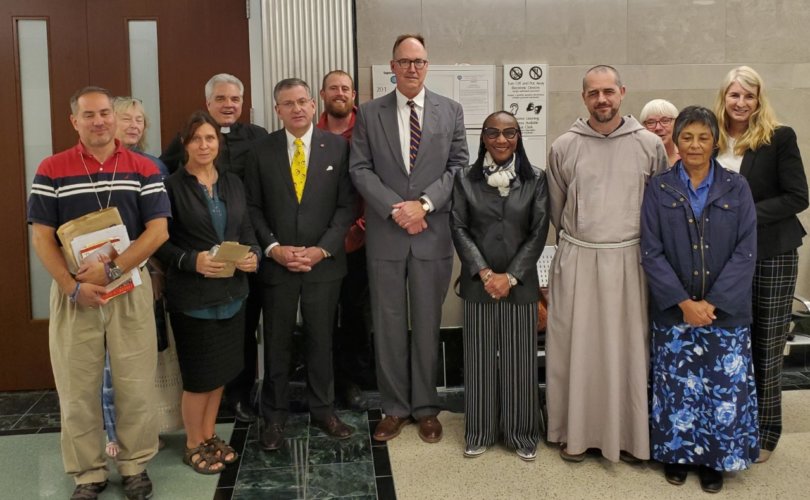 Red Rose Rescuers Fr. Fidelis Moscinski, Will Goodman, Patricia Woodworth, and Matthew Connolly faced the Superior Court of the District of Columbia on Thursday, where they were examined by Judge John R. Johnson. They were charged with trespass for having entered the Capital Women’s Services abortion center on March 19, intending to prevent the death of babies scheduled for abortion.

The center is operated by Dr. Steven Chase Brigham, whose New Jersey medical license was pulled in 2018. He had been charged with “gross negligence” in practicing late-term abortions in New Jersey and Maryland.

The rescuers were represented by their attorney, John C. Kiyonaga. The prosecutor called no witnesses.

The court allowed Kiyonaga to make a brief statement in favor of allowing the use of the “necessity defense.” The defense asserted that the principle allowed trespass so that the Red Rose Rescuers could try to preserve babies in imminent danger of death.

According to Kiyonaga, an existing 1979 law in the District of Columbia that might limit protection of unborn children may be outdated. He noted that in the 40 years since then that 23 states recognize fetal homicide, and 11 states have fetal pain laws, as does the federal government.

Kiyonaga said that conditions and quality of care for women at Brigham’s abortion center are substandard. “Stephen Brigham had been incontrovertibly established as a disaster in the field of women’s health care and abortion in particular,” said Kiyonaga, who suggested that a lawsuit may be filed.

At the time of the rescue, Kiyonaga said, Brigham was operating without a license.

Echoing statements made in the past by Red Rose Rescuers, who have said they wish to give voice to voiceless victims of abortion, Kiyonaga said, “Complaints have been made which have been ignored. And aborted, unborn, have no standing to file a lawsuit.”

Lauren Handy, a pro-life activist, filed the original complaint against Brigham in October 2017. In testimony before the court, it was revealed that Handy has not yet received a response from the D.C. Department of Public Health. According to Judge Johnson, the department should respond to Handy. “I’d also want to know … what is being done about it, if anything?” he said. “And if nothing is being done, why not?”

The judge suggested an inquiry of the department. “You can go knock on their door and say, ‘what’s going on?’” he said.

Judge Johnson stated that “defense of necessity” argument was disallowed under existing D.C. law despite U.S. case law that seeks to prevent harm to the unborn child. When the judge saw that the state’s witness had not materialized, he asked the prosecutor whether the case could be presented without her, but the prosecutor said no. Judge Johnson thus pronounced the verdict, saying  “the case is dismissed for want of prosecution.”

A previous trial of Red Rose Rescuers also saw the charges dismissed in July. Rescuers Fr. Stephen Imbarrato, Handy, and Bud Shaver entered Washington Surgi-Clinic on the same day as the other Rescuers entered Brigham’s abortuary on the other side of the city.

The 26-year-old Handy, who is the founder of non-profit MercyMissions.net, has been an active pro-lifer for six years, and worked with Red Rose Rescuers for the last two.

“It is an honor and a blessing to serve Jesus and the unborn,” she said in a phone call with LifeSiteNews, “regardless of the consequences.”

She said she could accept going to prison because she would be able to deepen her ministry. “Going into an abortion center to save babies is what any Christian should do,” she said.