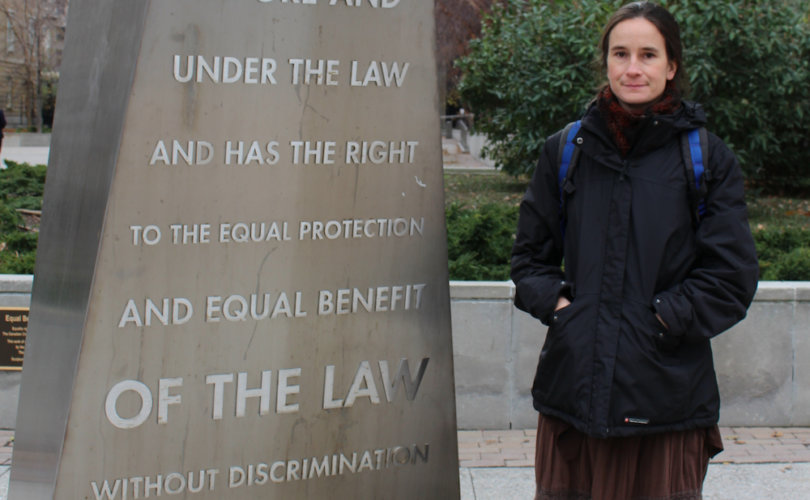 Mary Wagner outside the Superior Court of Ontario in Toronto during her appeal hearing.John Bulsza

TORONTO, December 9, 2016 (LifeSiteNews) — Pro-life prisoner of conscience Mary Wagner was denied a fair hearing at her 2014 trial after 22 months in jail when trial judge Fergus O’Donnell issued an “ambush opinion” that ignored the grounds of her defence, Wagner’s lawyer has argued.

Ontario Superior Court Justice Tamarin Dunnet heard the landmark appeal, the origins of which date back more than four years, when Wagner was arrested August 15, 2012, after entering the waiting room of a north-west Toronto abortion facility and trying to persuade the women present there not to abort their children.

Because Wagner refuses to sign bail conditions requiring her to stay away from abortion facilities, she remained in jail almost two years before O’Donnell heard her case. He convicted her on June 12, 2014 of mischief and breach of probation.

In a 41-page factum, and during two days of oral submissions and a half-day of rebuttal, Lugosi, a doctor of juridical science, meticulously refuted O’Donnell’s reasons for judgment.

He told the Court that Wagner based her defence of necessity on Section 37 of the Criminal Code, which was in force at the time of her arrest and states that a person is “justified in using force to defend himself or anyone under his protection from assault.”

Wagner contended that “anyone” includes the child in the womb, who is a human being.

“I consider it a necessity to enter this building where human life is in danger,” she explained in previous testimony, Lugosi told the Court.

“It’s the last chance for a human being in the womb to be protected. … They’re my brothers and sisters and they’re under my protection,” she stated.

But in convicting Wagner, trial judge O’Donnell issued an “ambush opinion” by relying instead on Section 34 of the Criminal Code, which had supplanted Section 37 in March 2013, and replaced “anyone” with “person,” Lugosi argued.

O’Donnell’s decision effectively hijacked Wagner’s defence by diverting the track of trial to “personhood,” Lugosi told the Court, adding he had “repeatedly told” the judge “personhood was not on the table… How could he get it so wrong?”

Rather, the case was about “whether an ‘unborn child’ is a human being, which is a biological reality capable of a finding of fact.”

“Dr. Lugosi made it fully clear to the trial judge that Wagner’s defence was not about personhood or the legal status” of the unborn child, noted Wagner’s longtime friend John Bulsza, one of the three dozen supporters who daily attended the appeal.

“Mary’s defence relied solely on the term ‘anyone’ as used in Section 37, implying that the pre-born child in the womb was included in the term,” he told LifeSiteNews in an email.

Judge refused to hear evidence of humanity of unborn child

O’Donnell further erred in law by not allowing Wagner to challenge the constitutionality of Section 223, even though this was crucial to her defence, Lugosi told the Court.

Section 223 states: “A child becomes a human being within the meaning of the Act when it has completely proceeded, in a living state, from the body of its mother.”

The effect of Section 223, as Lugosi noted in his factum, is to “narrow the scope of legal protection” under Section 37 “to only those children born alive, and not protect unborn children at all.”

In other words, Wagner could not rely on her Section 37 defence of necessity unless Section 223 was declared unconstitutional.

Lugosi described Section 223 in his factum as the “epitome of prejudice” because it “elevates one class of people above an inferior class” and gives the “superior class the role of God to arbitrarily decide who lives and who dies in the unwanted class of lesser value.”

It violates the Charter’s Section 15 equality guarantee and Section 7 right-to-life guarantee, he told the Court.

Dr. John Thorp Jr., professor of medicine, and Dr. Maureen Condic, professor of human embryology, were willing to testify in 2014 that “an unborn child is an unique living human being from the moment of conception, and that abortion is an act of violence that kills that unborn human being,” Lugosi noted in his factum.

But O’Donnell refused to hear the evidence, thus nixing a Section 223 constitutional challenge.

He decided “that due to trial management, more time should not be given to the trial,” Bulsza told LifeSiteNews.

Moreover, O’Donnell noted in an email to counsel he had “decided that no purpose would be served by having an evidentiary hearing on Ms. Wagner’s Charter application and that in the current state of the law it has no possibility of success,” noted Lugosi’s factum.

“Dr. Lugosi, not leaving any stones unturned, ensured that at the trial level, the ‘will say’ statements (written documents) of the two expert witnesses were submitted and hence became part of the court records,” noted Bulsza.

In Lugosi’s “final submissions in his rebuttal to the Crown, he read parts of the ‘will say’ statements, describing the creation of a new human being at the moment of conception,” Bulsza told LifeSiteNews. “From the zygote stage onwards, the unborn child merely develops through all its stages of life.”

Judge: Wagner had other options and no following

O’Donnell also rejected Wagner’s defence of necessity because, he ruled, she had other options, and there was no “mass movement of society” following her example of intervening directly to prevent the killing of unborn children by abortion.

“You can have an atrocity and it becomes normalized,” Lugosi told the Court. “Most people are apathetic” and “desensitized on the topic of abortion.”

Wagner, however, considers it her “legal duty to save human life,” and regards any probation order to stay away as having no binding force.

“I had an option not to go to the clinic, but as far as the security and protection of human beings, there was no other option for them but for me to break that court order,” she had stated in previous testimony.

“The state has a legal duty to protect all innocent human life,” noted Lugosi’s factum. “When the state abdicates its duty, the people may fill the gap left by the state by exercising their moral and legal common law duty to save human life.”

O’Donnell also contended these were settled points of law, Lugosi told the Court, but he argued that Wagner’s necessity defence relying on Section 37’s “anyone” including unborn children, and her constitutional challenge to Section 223 are “both completely novel questions.”

Bulsza said a “poignant moment occurred” when Wagner sat beside Lugosi on the third day of the hearing after his assistant counsel had to leave.

“Another impressive factor…was to see forty supporters of Mary Wagner and the unborn fill the courtroom the first day and 30 plus on the last day,” Bulsza observed.

Crown lawyer Petrie, in submissions on the third day, cited case law (Dobson, Winnipeg, Sullivan, Borowski, Demers and Daigle) that established that the legal rights of the woman took precedence over those of the unborn child, he noted.

Court obligated to hear voice of “littlest ones”

Lugosi has asked the Superior Court to acquit Wagner and to make several declarations, including that her probation order is unconstitutional, that the child in the womb is a human being based on the ‘will say’ evidence, and that abortion is the killing of a human being, and therefore culpable homicide.

Although Lugosi did not request it per se, it is also possible the Court could order a new trial.

“Whatever the outcome of this appeal, I am grateful that Our Lord gave us this opportunity to be a voice for his littlest ones in the court,” wrote Wagner, 42, in an email to supporters.

The “efforts of Dr. Lugosi — with the help of the prayers of the Church — have been well worth the fight,” she added.

“This case has obligated the courts to consider the gravest of injustices, the denial of the right to live of our littlest, most helpless brothers and sisters,” wrote Wagner, a devout Catholic originally from British Columbia.

“If the courts refuse justice for God's littlest children, and parliament as well, we, as Christians, need not be immobilized,” she pointed out.

Justice Dunnet has reserved her judgment.