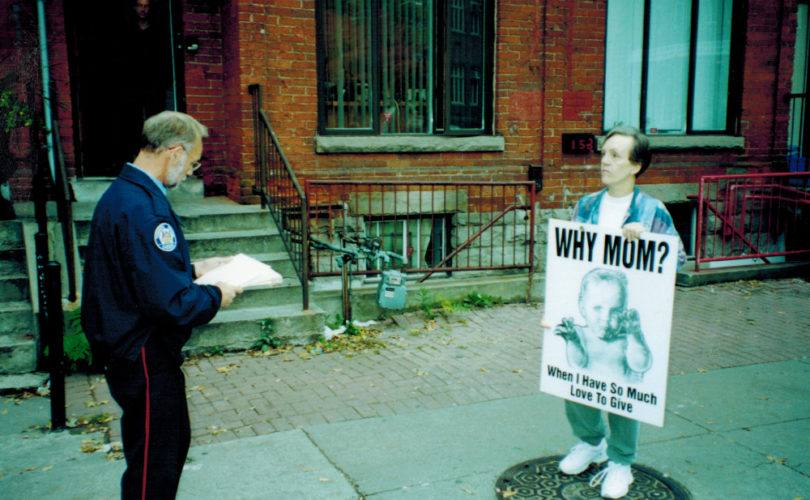 Linda Gibbons’ trial on charges of disobeying a court order and obstructing a peace officer will take place on November 12, beginning at 9:30 a.m. in Room 508 of the Ontario Court of Justice at College Park, Yonge and College Streets in downtown Toronto.

The date was established during a hearing at the same courthouse on September 25, during which a justice of the peace set aside three hours for the trial. Several of her supporters watched the proceedings from the public gallery. Through her lawyer, Daniel Santoro, Gibbons is pleading not guilty and will stay in custody at the Vanier Centre for Women in Milton pending the trial, as she declines to agree to bail conditions that stipulate she stay away from abortion sites.

Gibbons had previously been charged with just disobeying a court order. However, Crown attorneys usually drop obstructing a peace officer charges once a trial gets underway.

Although more than a month and a half had elapsed since Gibbons’ arrest, Santoro was presented with written disclosure (a summary of the Crown’s evidence and case against Gibbons) only as the hearing began. A compact disc he had been given previously that purportedly contained the disclosure was unreadable. Consequently, an interim hearing will have to be held on October 14 at 10 a.m. in Room 505 at College Park to confirm the disclosure is complete before the trial begins.

Gibbons was arrested outside the “Morgentaler Clinic” abortion site on August 7. The site is protected by an injunction issued by a civil court that bars certain conduct and activities of a pro-life nature within a specified area. Gibbons was acquitted on appeal in a similar, previous case related to an arrest at the Morgentaler site in 2012.

In that matter, Justice Gary Trotter overturned a lower court ruling finding her guilty and rejected the Crown’s argument that Gibbons had engaged in “intimidating” conduct at the site, mainly because she was brandishing a sign depicting a crying infant.

There is no indication at this point of whether the Crown intends to argue intimidation once again or cite Gibbons for allegedly violating another part of the injunction.