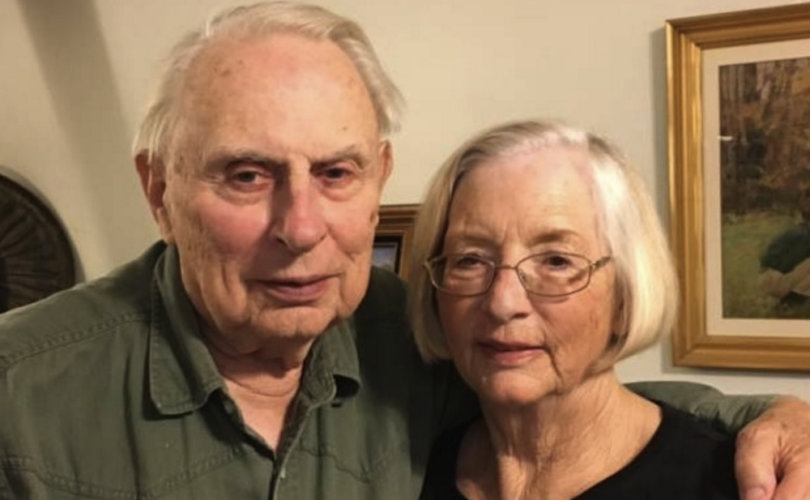 February 20, 2017 (LifeSiteNews) — Memorial tributes are pouring in for Frank Worthen, a faithful Christian pioneer who formed the first “ex-gay” ministry in the United States in 1973, the same year “gay” militants pressured the American Psychiatric Association into “normalizing” homosexuality.

Worthen’s motto for ministry was simple: “Freedom from homosexuality through Jesus Christ.” He passed away February 11 at age 87. Survivors include his wife of 32 years, Anita, and his stepson.

“A great man has gone to God's great reward. Frank Worthen, who is considered to be the father of the ex-gay movement, went to be with his greatest love, Jesus, this morning,” said David Kyle Foster, a former homosexual and ex-male prostitute himself. Foster, as the founder of Mastering Life Ministries and Pure Passion TV, is one of many Christians continuing Worthen’s legacy in reaching out to “sexually broken” people across the world.

Worthen’s father died when he was just 13. He looked for a new father figure and found one in his pastor. Tragically, the churchman turned out to be a predatory homosexual who “groomed” young Frank to be “gay,” telling the innocent child that God made him “special” as a homosexual. Worthen went on to live 25 years as a “very active homosexual” in San Francisco.

As a highly successful businessman yet unhappy in his “gay” life, he starting thinking about suicide. Then in 1973, Worthen, at 43, embraced the life-changing gospel of Jesus Christ and soon began reaching out to other same-sex-attracted men similarly dissatisfied with their “gay” life.

Worthen and his friends formed Love in Action, the first Christian ministry devoted to helping people overcome homosexual attractions. Later, he went on to found Exodus International, a larger umbrella group of ex-“gays” that imploded in 2013 after its leader, Alan Chambers, embraced heretical teachings about sin and infamously issued what his former allies said was an unnecessary apology to the “LGBT community.”

Heralded for his consistent, year in, year out witness to God’s ability to help people leave homosexuality behind, Worthen never made such headlines in the secular media and blogosphere. In fact, he doesn’t even have a page in the left-leaning Wikipedia. Still, LGBT ideologues either despised Worthen or dismissed him as a “fundamentalist” because of what he represented: the impermanence of “gay” identity.

Former homosexual and author Joe Dallas said Worthen is worthy of honor as a genuine hero: “[T]rue heroes … take a stand, resist the tide, set an example, break new ground, and benefit others. Our lives are inspired and enriched by them, and when they’re gone, we feel the loss.”

A Most Challenging Ministry

Through Worthen’s life and decades of ministry work, he experienced the successes and failures of a most difficult calling: helping people overcome the pull of same-sex attractions in a world in which “gay” identity has effectively been “normalized” through an aggressive political movement championed by the media, schools, corporations, and Hollywood.

Even some prominent “ex-gay” leaders who had worked directly with Worthen fell back into the homosexual lifestyle, giving grist to the LGBT activist shibboleth that change away from homosexuality is impossible.

One such man is John Smid, who took the reins of Love in Action, the “ex-gay” ministry group that Worthen started. Amid LGBT and media pressures and his growing doubts about the ability of homosexuals to change, Smid ultimately renounced reparative therapy, divorced his wife of more than two decades and in 2014 “married” a man.

Today, celebrating cases like Smid’s — and ignoring ex-“gay” success stories like Worthen — the LGBT lobby is on a crusade to legally ban pro-heterosexual therapy and counseling for minors, even for those who, like Worthen, were emotionally abused — or worse, sexually abused — by adult homosexuals. (Many men like CNN anchor Don Lemon who identify as “gay” were sexually abused by adult men as boys.)

Even His Ideological Foes Praise Him

The disheartening cases of those who returned to a homosexual identification inevitably received far more media attention than those of people who remained faithful to God in their new life.

But it is a testimony to Worthen’s character that even those who ultimately rejected his biblical message and defiantly returned to their former “gay” lifestyle praised him in his passing. Perhaps the most famous of such individuals is John Paulk, who for years toured the country for Focus on the Family as a man who had overcome his same-sex attractions.

Paulk was married to Anne (a former lesbian) and was the father of their three sons. But like Smid, he buckled to worldly pressure, abandoned his marriage of more than two decades to Anne, and returned to living what he claimed was his “true self” as a “gay” man.

Nevertheless, John Paulk posted this tribute to Worthen on his Facebook page:

“Frank Worthen — one of the few father figures I felt loved by — passed away yesterday. Frank was one of the fathers of the ex-gay movement. And although I do not support nor endorse this movement any longer, I [mourn] Frank's passing. I will never forget getting off the bus in 1987 on my journey from Ohio to California and Frank wrapping me in his arms. … No matter my journey, he always loved me unconditionally. May the Lord give your soul and heart rest, my dear Frank.”

Worthen’s life story with his twisted and dysfunctional childhood is not unlike that of many self-described “gay” men. He experienced sexual, psychological and emotional abuse at the hands of a perverted pastor, who manipulated young Frank into embracing homosexuality.

In a 2012 interview with Pure Passion, a Christian video ministry launched by Foster, Worthen calmly recalled how at the tender age of 13 his pastor told him, “Frank, you are a homosexual.” The boy, who had recently lost his father and looked to the pastor as a father figure, had to look up what a homosexual was.

The pastor, distorting the Bible by citing supposed homosexual relationships in Scripture, “told me this was a wonderful thing” and a “special blessing from God,” Worthen said.

Later, when Frank was 16, the pastor picked out an obese 38-year-old man in the church whom he decided was to be Frank’s homosexual lover. Worthen said the fellow “looked like a fat, old man,” and wasn’t interested. But the pastor told him, “If you don’t do this, our relationship is over.” Frank was working as a janitor at the church to help his mother make ends meet, so this was a powerful threat, as he feared getting fired.

The predator-pastor was angry at Frank but did not fire him. At one point, he called Frank and all the boys in the church into his office. He then told them to drop their pants so he could “inspect their genitals,” Worthen recalled.

Later, Worthen took his pastor’s dubious counsel to heart and decided “I must be gay.” He went on to live “25 years of a very active homosexual life” in San Francisco, to which same-sex-confused men were flocking from all over the country. San Francisco was ground zero in the “gay liberation” movement.

But Worthen’s ‘liberation” led only to heartache, as he said being gay “just didn’t work for me.”

As a business owner with stores in Marin County, San Francisco and Carmel, Worthen had to drive across the Golden Gate Bridge two to three times a day. He started thinking about stopping on it and jumping off the bridge to his death. One day, while driving on the bridge he heard a voice say: “If you’re willing to take your life, are you willing to give it to me?”

Worthen heard the message again and decided it was God speaking to him. Later, he heard a voice saying, “I want you back.” He met with one of his Christian employees and prayed the sinner’s prayer, giving his life to Jesus Christ.

That began Worthen’s “exodus” from homosexuality, and he started reaching out to homosexuals in San Francisco, ultimately launching Love in Action, and later Exodus International.

“Frank finished well. He paved a path that many followed, myself included,” said Anne Paulk, who, unlike her ex-husband John, did not return to her former homosexual lifestyle. “He demonstrated faithfulness to Jesus for the remainder of his life after giving it completely over to the Lord in 1973. He went on to help found Exodus International and Restored Hope Network, after attempting to bring Exodus back into theological and missional integrity under Alan Chambers’ errant leadership.”

Paulk is the executive director of Restored Hope Network (RHN), which grew out of the ashes of Exodus International. Then the largest umbrella of “ex-gay” ministries in the world, the organization started through Chambers “dialoguing” with homosexual activists before he presumptively declared that the vast majority of homosexuals who try to change their “orientation” cannot. Chambers even said God is “cool” with homosexual “marriage.”

Searching for a Father Figure

Chambers’ apostasy led Worthen in his “retirement” to help found RHN, which gave the lie to exaggerated LGBT activist claims that the ex-gay movement was dead. RHN, a coalition of ministries that have not abandoned biblical truths about sex and marriage, holds annual conferences featuring men and women who are overcoming the pull of homosexuality. This year, it is June 16-17 in San Diego.

Until the end, despite his many detractors, Worthen said male homosexuality is best understood as a “father replacement search.”

“For many years, I searched for male affirmation, but I was looking in all the wrong places,” he wrote. “When I turned my life completely over to God, He became the loving father I had never found. And He has given me a wonderful worldwide ‘family’ of brothers and sisters in Christ.

“I am so grateful for the new life that the Lord has given me,” he continued. “I struggled with homosexuality for over four decades, but Jesus Christ set me free.”

Frank Worthen’s books, including “Helping People Step Out of Homosexuality,” can be found on Amazon.

Take Action: With legions of LGBT activists arrayed against them, ex-“gay” ministries like Restored Hope Network and Mastering Life Ministries need your help. Please consider supporting these inspiring ministries with your prayers and donations.